OMAHA (DTN) -- Jerry Demmer went to bed Wednesday evening hoping his home area of southern Minnesota would miss the heavy rains that had flooded areas south of him. But when the Clarks Grove, Minnesota, farmer awoke Thursday morning, he quickly learned they had not.

"I saw the (Twin) Cities and just to the south of us into northern Iowa had some really heavy rains, and I thought maybe we missed it, but then it hit us about midnight," Demmer told DTN.

The heavy rain fell in northern and northeastern Iowa through south-central and southeastern Minnesota into western and central Wisconsin, according to DTN Senior Ag Meteorologist Bryce Anderson. There was widespread coverage of 2 to 4 inches and up to 10 inches in several locales.

The storms occurred at the boundary between unseasonably hot weather in the central and southeastern Midwest, and cooler air out of the Canadian Prairies, Anderson said. "This, along with a consistent inflow of Gulf of Mexico moisture, led to a continuous conveyor belt of storms in this part of the Midwest," he said.

Demmer said he got 7.5 inches of rain Wednesday night into Thursday morning. He said his area of Freeborn County received more than 9 inches of rain in the past seven days and almost 13 inches over the past 30 days.

"We are certainly not short of moisture this fall," he said.

Demmer is hopeful the water standing in his fields will recede quickly and harvest will proceed as normal. He points to a wet September in the early 2000s when his region saw a wet September only to have the weather turn dry, allowing for a normal harvest that fall.

After a quick drive around his fields Thursday morning, he discovered a 40-acre field of soybeans was under water. An 18-acre field of potatoes, which were almost ready for harvest, was also flooded. While the soybeans could still be OK, depending on how long the water stays, he is fairly certain the field of potatoes is a complete loss.

Demmer said he estimates his soybeans under some standing water could see some yield loss of 5% as the bottom pods of the plants are submerged in standing water. Corn, however, should be OK, he said.

About 30 miles to the northwest, Tim Malterer saw even more rain in Waseca County. The Janesville, Minnesota, farmer said he had about 13 inches of rain in about 48 hours. Most of the lower-lying fields were under water, as were many of the region's roads.

"A number of the roads have been taken out, so I'm concerned about harvesting the low ground, and then the concern is how to get the crop from the fields to the farm without major trucking delays," Malterer said.

Some township and county roads are completely "blown out" while most of the highways in the county are still passable. It will be interesting to see how long it will take the county and townships to get their roads repaired or replaced, Malterer said.

Malterer said he had just begun to harvest both corn and soybeans on his farm, finishing only about 22 acres of corn and 60 acres of beans.

"I think at this point the beans will make it through, but they will lodge and fall over, making them very difficult to pick up," he said. "We haven't had a frost yet, so we are lucky because the plants are still alive enough to make it through."

Farther east, farmers in southern Wisconsin have also seen significant rain in recent weeks, which has led to delays in harvesting corn silage or grain.

Justin Premo, who farms near Columbus, Wisconsin, said he has had about 3 inches of rain this week. But farther north in the south-central part of the state, some areas saw 4 to 6 inches. There was even an area that got 6 to 10 inches, he said.

Premo said one of his local TV stations said Wednesday evening that if his region did not get another drop of rain the rest of the year, they would still be above normal for the year.

"Best-case scenario, if it stopped raining today, we are several days to a week out from being able to chop again," Premo said. "Similar to last year, the corn silage is going from being at the perfect moisture to too dry in the course of a week."

Bill Halfman, a University of Wisconsin Extension agricultural agent for Monroe County located in Sparta in southwestern Wisconsin, said farmers in his county face the same situation as Premo. There is a narrow window for chopping silage with optimum moisture levels. Farmers with wet fields will be delayed, and thus their silage will be less than ideal, he said.

"In many cases, the farmer chopping silage still needs to have silage to feed so it will be chopped, but the quality is just lower," Halfman said. "Perhaps for some they will decided to not chop any or maybe not chop as much as they had planned."

Jason Willemarck, who farms near Baraboo, told DTN the last two months of the growing season has been extremely wet in the Badger State. He said he has received about 4 inches from late Wednesday into Thursday. The forecast is calling for even more rain.

"I think in August it was 9 to 10 inches above normal, and to date in September is 4 inches ahead," Willemarck said. "Seems that as soon as areas dry out for a day or two, we get more."

Willemarck said the crops in his area look fairly good despite all the late-summer rains, but there have been some reports of problems with mold found both in corn and soybeans. He is concerned about it being muddy during harvest this fall. If the wet weather continues, he said he thinks they may have to wait until the ground is frozen to harvest.

"That is, if the stalks can hold up over time," he said. 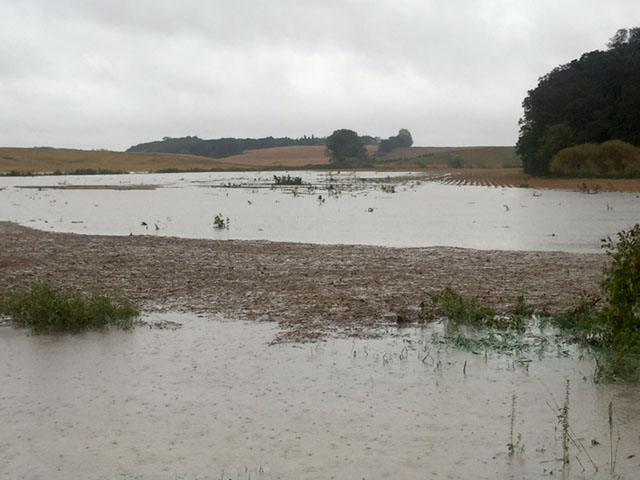