OMAHA -- The market for renewable identification numbers, or RINs -- the lynchpin that ensures fulfillment of the Renewable Fuel Standard -- may still be ripe for fraud and abuse, according to a report by a former EPA investigator conducted for Valero Energy. Valero is both a petroleum refiner and ethanol producer.

Although any potential reform of the RFS is likely to happen after the current election cycle, energy companies have raised concerns about the rising price of RINs. The RFS requires obligated parties, including gasoline blenders, to either blend a certain volume of ethanol or to buy RIN credits from others who have blended ethanol.

The RFS program is considered to be an essential element of expanding markets for biofuels and ultimately for corn as a feedstock. Fraud in RINs could force changes in -- or even repeal of -- the RFS if it is more insidious than currently believed.

One ethanol industry group said the RIN market should be more transparent to know who is buying and selling.

Brian Milne, energy editor for DTN's parent company Schneider Electric, said the rise in RIN prices has been good for gasoline retail outlets. Refiners without retail outlets, however, are seeing a major ramp-up in costs to comply with the RFS.

"Companies that are looking for huge profits from a government compliance credit are speculating, and that comes with risk," Milne said.

"The RIN shouldn't be a massive profit center. It's meant to show compliance with a program designed at the time to improve the environment through less oil use and more renewables and improve national security by reducing imports.

"That fact that the RIN market is exploding suggests the RFS as designed is not working correctly, and that the program would eventually harm consumers through higher prices. Certainly, companies that are adding blending infrastructure to lessen their exposure to high RIN costs and to potentially profit are being prudent."

EPA's former Chief of Criminal Investigations Doug Parker said in a recent report he wrote for Valero that, despite efforts in the biofuels industry to secure the RINs program, it still is ripe for fraud. In addition, he advocates for a change in the point of obligation for the RFS.

"RINs have essentially become commodities like any other that are traded on a daily basis for millions of dollars," Parker said in his report.

"But unlike traditional commodity markets with market oversight and participant limits, the RINs market is opaque and was enacted without appropriate safeguards... This level of transparency and market regulation is not present in the RINs market, and the opaqueness of the market is a critical factor that allows criminal conduct to continue."

Much of the RIN fraud uncovered in the past decade occurred in the biodiesel industry.

Parker said much of the risk involved in RINs trade "falls on refiners and importers, the obligated parties who have to obtain adequate RINS to meet their RVO (renewable volume obligations), but who have no decision-making authority at the point of blending -- the point at which decisions are made on where renewable fuel is procured, analyzed and blended."

Bob Dinneen, president and chief executive officer of the Renewable Fuels Association, said he believes fraud isn't as widespread as it may seem and that when fraud is uncovered, prosecutions take place.

"Without getting into the issue of the point of obligation, which the paper was commissioned to address, I believe the paper is founded upon a false premise -- RIN fraud has not been a reality for ethanol used in the RFS program," Dinneen said.

Since the RFS2 regulation took effect in 2007, more than 90 billion ethanol RINs have been generated without a single case of fraud being uncovered or prosecuted. In addition, there have been a number of RIN fraud cases in biodiesel, but those cases resulted in prosecution.

"Ethanol is overwhelmingly the most used renewable fuel in the program," Dinneen said. "By largely ignoring the marketplace and structural differences between the two renewable fuels, the author gives a false impression of widespread problems with the program when that is just not the case."

Dinneen said the risk of RIN fraud is not the same thing as "competitive distortions" in the RIN market, "yet the author seems to want to lump" both together.

"While we agree EPA and CFTC (Commodity Futures Trading Corp.) could and should take some steps to help improve the openness of the RINs market (for example, disclose in real time who is holding and transacting RINs, and regularly quantifying 'open interest'), we do not believe RIN fraud is a legitimate concern," he said.

"Competitive distortions have generally occurred because some obligated parties made investment decisions in response to the RFS2 program and others did not."

Parker said in the study a lot more needs to be done to secure the RIN market. He advocates for changing the point of obligation as a way to prevent future fraud.

"Requiring a more-transparent market with more direct engagement and responsibility at the point of blending can limit fraud and lead to a significantly more effective program for the country," he said. "Adjusting the RFS regulations by changing the point of obligation to the blender would have the effect of helping to close the barn door to prevent any future escapes and would make rounding up future 'horses' far less necessary."

Ethanol industry groups have pushed for changing the point of obligation in the RFS from blenders to the owners of fuel racks who pay excise taxes on the fuel. The rack price is the price refiners charge to sell their gasoline to various clients.

However, this week Politico reported that oil and gas interests were circulating a fact sheet on Capitol Hill aimed at convincing lawmakers to not support legislation to change the point of obligation. The fact sheet said changing the point of RINs obligation could complicate the program further.

"The RFS is a 'buyer beware' program with no EPA oversight," the fact sheet said. "Far from 're-balancing' risks, shifting the RFS point of obligation -- which would likely create more than a thousand additional individual points of obligation within the program -- would dramatically increase the number of situations in which error could creep into compliance efforts, creating invalid RINs." 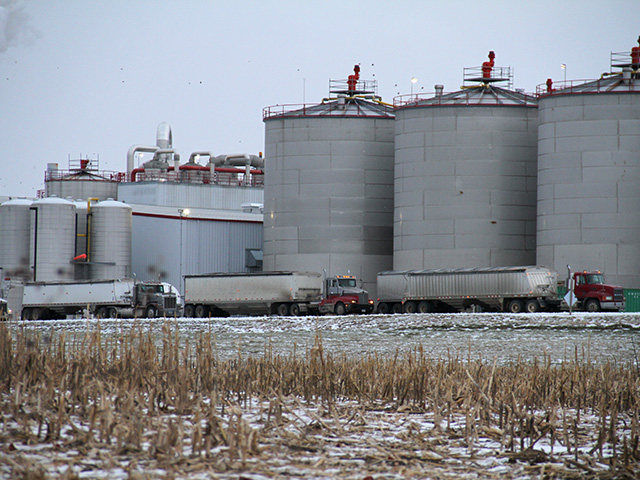