LOUISVILLE, Ky. (DTN) -- U.S. agriculture could dodge the long-feared collapse in farm real estate prices this commodity cycle, contend economists, lenders and appraisers attending a Farm Foundation meeting this week. But some cautioned the bubble more likely to burst will be used farm equipment values over the next year if profit margins don't improve.

"Land values haven't seen near the pullback that everyone predicted," observed Bruce Sherrick, director of the TIAA-CREF Center for Farmland Research at the University of Illinois. That moderation makes sense, he added, given that farmland investors keep a long-term perspective on value despite blips in day-to-day commodity prices.

"Land investors' expectations of future income are more like climate, not weather," Sherrick said. If it rains too much one season, it doesn't mean the climate has changed, he said, any more than an abrupt correction in commodity prices necessarily undermines farmland values with a 30- to 50-year history of double-digit appreciation.

"The old saying is that economists have predicted nine of the last five recessions," Sherrick said. "The farmland bubble has been over predicted as well."

Randy Dickhut, a senior vice president and head of appraisals at Omaha-based Farmers National Company, agreed, describing the market as balanced. After studying recent sales in the more than two dozen states where the company operates, "what we're seeing in farmland is an equilibrium between buyers and sellers, not a bubble," he said.

Dickhut estimates that 40% fewer farms are for sale this season compared to peak years; with such tight inventory, prices in most regions have remained relatively steady. Outliers like North Dakota have tumbled perhaps 20% off peak, he said.

The latest Federal Reserve surveys showed Mountain State irrigated farmland gained 13% in the first quarter and Corn Belt land off only 4% on average, compared to a year earlier. It's lower-quality land that has experienced more of a hit, other farm managers reported.

Mike Jacobson, chairman and CEO of NebraskaLand Bank of North Platte, Nebraska, sees nothing on the horizon that could match the distress sales of the 1980s. He points to significant differences in land and credit markets compared to when he launched his farm lending career in 1980. Early in that decade, banks paid 14% on federally guaranteed certificates of deposit, so investors had safe alternatives compared to farmland. That encouraged them to sit on the sidelines when agriculture hit a rough patch.

"Today, we aren't even paying 1.4%, we're paying 0.4%. So what are the alternative investments for people looking for a return? They aren't there," Jacobson said. That's limited most of the land trading hands today to estate or retirement sales, with other landholders preferring to ride out the market.

Another difference in this cycle is that farmers possess much more equity in their land and have little incentive to sell at fire sale prices. "Nobody goes through wholesale liquidation today like they did in the 1980s. Today a distressed operator might sell just 80 acres for a little cash, but not a wholesale sellout," Jacobson said.

In part, that reluctance is a result of the Farm Credit System and other lenders capping the amount of credit they would extend on farm mortgages starting about 2008. So instead of mortgaging up to 85% of the current market value of properties, as was common in the 1980s, lenders refused to finance more than about $4,000 to $5,000 per acre in places like Nebraska, the price they thought land could cash flow long term.

"That works for today's $4 corn," Jacobson said, so such proactive policies have prevented a flood of distressed properties from hitting the market.

For example, when several partners bought a Clay County, Nebraska, irrigated farm close to the peak in land prices, they could only borrow $5,000 per acre and needed another $7,000 per acre in cash or equity to pay for the deal.

"The underwriting has been much more responsible than in the 1980s," Jacobson added. "Why would anyone with that much equity in land want to give it up now? A farmer doesn't want to sell either equipment or farmland to raise cash, but they'll sell equipment before farmland if they have to."

INVESTORS WAITING IN THE WINGS

A new category of nonfarm investors like public and private real estate investment trusts (REITs) are not welcome in all states, but where they are active, they also improve the pool of potential buyers, Sherrick and others said. USDA believes that only 1% of the nation's farms are owned by such nonfamily corporate investors but they currently account for 10% of production. Sherrick expects them to grow aggressively in a farm real estate downturn, since they see real estate corrections as a buying opportunity.

Farmland Partners, a cropland REIT traded on the New York Stock Exchange, has grown from 7,300 acres to more than 110,000 acres in just two years, with a value over $600 million. CEO Paul Pittman's most common sellers are heirs who lack an emotional attachment to their farms and prefer the liquidity of cash. Farmland Partners estimates there are as many as 280 million acres owned by heirs who are three generations removed from the farm and are good prospects for land turnover in the next few years.

"We are just as good stewards of the land as a dentist in Chicago," Pittman said of his REIT. In fact, he argued that REITs may be better landlords, since they are willing to invest in tile and other improvements. Some private REITs hold land for as little as seven years, but Pittman claims to operate more like insurance company owners with decades of low turnover.

The biggest bubble ahead isn't farmland, but farm equipment, others said.

Today's highest-risk operators are younger farmers who didn't have a chance to pad their net worths with farmland appreciation and who rent the bulk of their operation, Jacobson said. If they can't renegotiate more reasonable rents for 2017, all they have left to sell is farm equipment.

"It will take a much longer sustained fall in overall farm incomes to drop farmland real estate prices, but pain in the equipment business could be significant," Jacobson said. "There's not much down market for some recent-model large equipment. Only the biggest operators want that scale, but they are more likely to opt for new than used. The reckoning we see in 2017 won't be for farmland, but for used equipment." 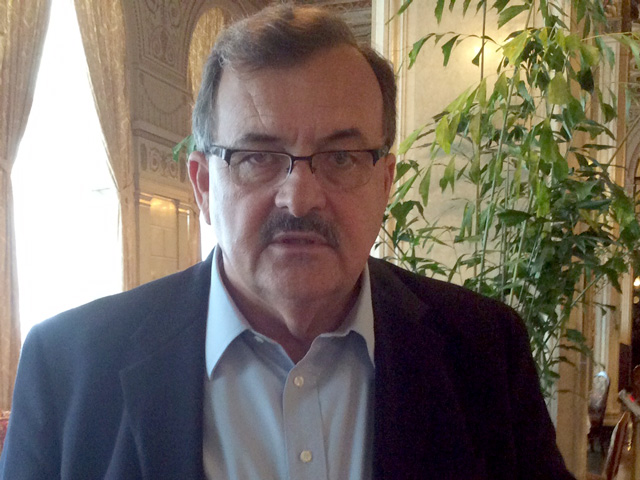