ROCKVILLE, Md. (DTN) -- Farmers love "refuge-in-a-bag" (RIB) systems for the ease they bring to planting Bt corn, but there is mounting evidence that they could accelerate Bt resistance in certain above-ground pests.

The practice of RIB, or seed blend refuges, has been widely adopted by seed companies for corn-growing regions of the U.S. By mixing 5% or 10% non-Bt seed into a bag of Bt corn, companies guarantee refuge compliance among growers, which has long been a point of weakness in the Bt system.

Now entomologists across the Midwest and South are sounding the alarm that RIB may not be the simple refuge solution industry and regulators hoped for. A growing body of academic research suggests the practice may actually increase the risk of Bt resistance in above-ground insects, particularly in the southern U.S.

"We've got a lot of data accumulating that seed blend refuges are accelerating insect resistance in ear-feeding [caterpillars]," Texas A&M Extension entomologist Pat Porter told DTN. "It's not the panacea we thought it would be."

The pests that most concern Porter and a number of his colleagues are the corn earworm, fall armyworm, and western bean cutworm. All three feed on corn kernels during their life span, and the kernels are the weak link of RIB.

RIB is used for Bt corn hybrids that contain two to three Bt proteins, also known as stacked or pyramided varieties. In theory, the pyramided hybrids should be more potent, because the insect is confronted with multiple Bt toxins simultaneously. The 5% or 10% non-Bt refuge corn plants are supposed to provide a place for non-resistant insects to survive, thrive and mate with any Bt-resistant insects that emerge from the Bt corn hybrids.

However, corn plants pollinate each other freely in a field. In most pyramided Bt corn hybrids, Bt proteins segregate in pollen grains, which then pollinate the small percentage of non-Bt corn plants scattered throughout the field. The result are "refuge" corn plants that contain a mosaic of Bt toxins. Instead of supplying an ear of only non-Bt kernels, the refuge ears give the insects "a buffet [of kernels] of moderate or low-dose toxins or no dose at all," Porter explained.

Many ear-feeding caterpillars start their life feeding upon silks and cob-tip tissue. By the time they dig into corn kernels, they are often larger and have a better chance of surviving a low dose of Bt toxin. They can also move to a neighboring non-Bt kernel on a refuge ear and recover from whatever dose of toxin they got in their first nibble. In fact, many studies have shown that insects can detect Bt during feeding and will actively move away in search of another kernel.

The end result is a recipe for allowing insects to evolve resistance to Bt, Porter said. "None of the 'refuge' plants in the field will actually be refuge with respect to these kernel feeders," he noted in an email to the EPA. "They will be low- and moderate-dose cafeterias where the insect is free to avoid toxins or consume them."

"THIS IS NO LONGER A REFUGE"

This effect -- the mosaic of Bt toxins in refuge ears -- has been confirmed by several entomologists over the years.

University of Minnesota entomologist Bill Hutchison initially observed the mosaic kernel phenomenon in a Minnesota sweet corn study as far back as 2001. But Porter's most recent experiments conducted in 2014 and 2015 put actual numbers to the problem.

He analyzed the ears of Pioneer Optimum Leptra, a three-toxin Bt corn hybrid, planted with a 5% RIB. On average, he found that only 38% of the kernels in the 5% refuge corn ears contained no Bt. The rest sported a variety of Bt toxins. Most dangerous were the 27% of refuge ear kernels that expressed just one Bt protein, which gives insects a chance to be selected for resistance, one toxin at a time, within a field of pyramided Bt corn, Porter said.

After a laboratory toxin analysis in cooperation with University of Minnesota entomologist Christopher Phillips, Porter also discovered that the refuge ears produced significantly lower doses of Bt than a pure Bt corn plant would.

"The result was a field where insects encountered Bt toxins in varying doses and at varying frequency," Porter said. "This is no longer a refuge."

RIB is most dangerous in the Southern cotton-growing states, Porter said. There, ear-feeding insect populations produce multiple generations, and these insects often migrate north for another round of selection pressure in Northern cornfields. Bt corn and Bt cotton fields also share Bt proteins, which places additional pressure on the traits.

Growers aren't supposed to grow RIB hybrids in these Southern areas, Monsanto and Pioneer representatives told DTN. Instead, they are encouraged to plant corn hybrids with a 20% adjacent block refuge. However, the EPA permits planting RIB in the South, and growers can and do plant RIB corn hybrids there, Porter noted.

"It's not something we would recommend," Tom Eickhoff, Monsanto's agronomy lead for North America, told DTN. "But we can't stop growers from purchasing seed."

If they do grow RIB hybrids, Southern growers are supposed to plant an additional 20% block refuge. However, industry surveys have shown that refuge compliance in the South has been consistently and dangerously low for many years. "Certainly that's the dilemma we're all faced with," noted Clint Pilcher, insect resistance management regulatory lead for DuPont Pioneer. "Compliance rates have been publicly reported to be lower than 50% in the southern U.S."

Porter said any Southern plantings of RIB -- with or without the additional 20% block refuge -- could have serious consequences.

"It's like a giant crack in the armor of Bt," he said. "Here on the High Plains, nearly every ear of corn has a corn earworm and a fall armyworm. We're giving that population a chance to be selected for resistance, one toxin at a time, at lower doses."

Mississippi State entomologist Mike Caprio has spent the past few years modeling the effect of RIB on insect resistance in ear-feeding pests. Even without Porter's most recent data (which aren't yet published), the results are concerning, he said. "It dramatically alters and speeds up resistance in our modeling," he told DTN.

"The more I have studied this, the more I've realized how problematic seed blend refuges are," Caprio said. "A block refuge will do a much better job of delaying resistance. If we want to have increased durability of these Bt traits, we need a lot more non-Bt seed out there."

Porter said Southern plantings of RIB should be addressed immediately. "What the science is telling us now is that we must keep RIB from being approved by EPA for the South," he said. "The Corn Belt will have to wait for more science."

EPA's Office of Pesticide Programs has been aware of academic concerns about RIB since 2012, the agency told DTN in an email. An EPA entomologist, Jeannette Martinez, was a co-author on Caprio's 2016 paper concluding that RIB could dramatically speed insect resistance. (Martinez declined to speak with DTN.)

In response, EPA has done some of its own research and is planning to convene a Scientific Advisory Panel in 2017 "to address corn earworm (and other lepidopteran) resistance risks in Bt corn and cotton, the additional risks posed by RIB products, and potential strategies to mitigate these resistance risks," the agency wrote.

Seed companies have been less receptive to the academic scientists' research and conclusions, but many are now doing their own internal research on the issue.

Syngenta declined to comment specifically on the researchers' concerns.

Pioneer's Pilcher pointed to a handful of studies produced by Pioneer scientists that concluded that RIB could still be an effective refuge method. The company is confident enough in RIB that it is considering deploying RIB as a practice in the southern U.S. due to low block refuge compliance there.

"It's being considered potentially as an option, knowing that we've been through 15 years of refuge adoption lower than we'd like to see there," Pilcher said. "We're conducting science to understand if that's an appropriate option or not." 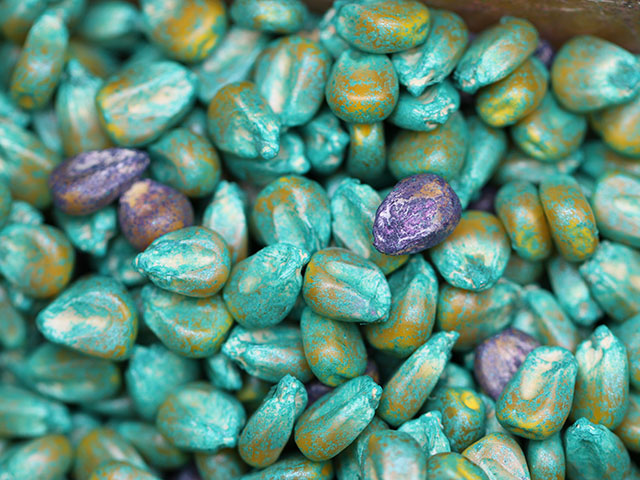