OMAHA (DTN) -- Onion farmer Chris Pawelski's farm near Warwick, New York, is in a regulation no-man's land of sorts. It's a place where any farmer could end up if regulatory boundaries are muddled or existing state law not enforced.

Pawelski can hardly find a government agency to protect his drainage ditch.

He once lobbied Congress against the waters of the United States rule now hung up in federal court. Ironically, Pawelski said he now would give anything for the U.S. Environmental Protection Agency and the U.S. Army Corps of Engineers to provide some regulatory oversight.

Federal agencies have shown no interest in taking a look at work done by a neighbor, Mark Rogowski Jr., who built an access road and wall in the center of a drainage ditch on Pawelski's property under the auspices of an easement dating back to the 1930s. The wall basically wiped out 80% of the drainage capacity of Pawelski's ditch, but he can't get anyone to do anything about it.

"EPA and the Army Corps of Engineers refuse to act in any regulatory capacity," Pawelski said.

The Warwick Township granted a permit to allow work on an access road that severely altered the flow of Pawelski's ditch which drains some 175 acres, including 19 on his farm in a mucky southeast region of the state. If a current dry spell ends, Pawleski said, it could easily lead to some $70,000 in crop losses from flooding on his property.

Given the ferocity EPA and the Corps have displayed around the country going after landowners over Clean Water Act violations, Pawelski is dumbfounded that regulators have chosen to ignore his battle over the drainage ditch.

Pawelski and his neighbor, who did not respond to DTN for this article, have had various disputes over the years.

Pawelski filed suit against the town and the neighbor and continues to explore his legal options. A court has since affirmed the easement is valid, but has left open a possibility the neighbor may have trespassed on Pawelski's property in doing the work.

"Not only does this affect me and my property but it affects all my neighbors upstream and any farmer who relies on these laws and protections to farm. This could happen to anybody."

Pawelski contacted Sen. Kirsten Gillibrand, D-N.Y. She reached out to officials at the EPA and the Corps of Engineers. The agencies responded to the senator in October 2015, according to letters to Gillibrand acquired by DTN.

The Corps said because Pawelski's neighbor has an "established farming operation, construction of this road in waters of the United States is exempt from regulation."

EPA said a permit wasn't needed if the "discharge of fill material is associated with 'normal farming' such as plowing, cultivating, minor drainage, construction and maintenance of farm and forest roads..."

Maintenance of drainage ditches generally is exempt from the Clean Water Act. The new waters of the U.S. rule -- now tied up in federal court -- could put more ditches under jurisdiction if they connect to rivers, tributaries and other waters of the U.S.

The Pawelski ditch drains directly into Quaker Creek, a main tributary of the Wallkill River.

The New York Department of Environmental Conservation did not respond to multiple requests by DTN for clarification about state law.

Paul Ruszkiewicz, Pawelski's representative in the county legislature and chairman of the Wallkill Valley Drainage Improvement Association, told DTN his association is powerless to help Pawelski.

"The Wallkill Valley Drainage Improvement Association, which I chair, does not have any regulatory authority but serves more as an organization to represent the interests of the growers in the drainage district," he said.

"Since we represent the interests of all of the growers in the district, we do not get involved with disputes between growers... The issue is more of a dispute over a right-of-way between Chris and his neighbor... If this project adversely affected the drainage in the area, neighboring growers would be weighing in heavily on this issue. The regulatory authority for the drainage district is the New York Department of Environmental Conservation. Unfortunately, they have a history of not responding to these types of issues."

Michael Sweeton, Warwick town supervisor, http://bit.ly/…, told DTN he is frustrated about the state's lack of action. Sweeton noted a drainage district law created in the 1930s clearly puts the Department of Environmental Conservation in Charge of ruling on such issues.

"They, to date, have refused to act in this capacity in this case," Sweeton said. "The town was the only agency to take any action to ensure the law was followed. I understand Chris' anger but against the town I think it is misplaced."

Sweeton told DTN the easement gave Pawelski's neighbor right of ingress and egress on the land that includes the ditch. The path and use of the ditch, Sweeton said, has changed during the years. The neighbor decided to fill in the ditch initially in an attempt to create a path wide enough for access to his farm fields behind Pawelski's land.

Sweeton said the town is the flood plain administrator according to state regulations. The town required the neighbor to do an engineering analysis and the town accepted the conclusion the project would not impede drainage ditch function.

"All of this was presuming he (the neighbor) had the right to do any work there," Sweeton said. "That right was presented as the easement granted in 1930. Our attorneys reviewed this and opined that indeed it was valid."

The Federal Emergency Management Agency, or FEMA, is looking into the situation since the ditch is in a designated flood plain.

A conservation and management plan for the Wallkill River watershed where Pawelski's farm resides also lays out protections for drainage ditches. The 16,000-acre region was designated as an agricultural drainage district by the state in the late 1930s.

An engineer hired by Pawelski determined the ditch would need to be moved and widened by 20 to 30 feet to match the previous drainage capacity.

The designation allowed for the planning and construction of a network of drainage channels and established legally binding requirements for the maintenance of the channels.

Laying out the local, state and federal laws on drainage districts, Pawelski is angry that no regulatory agency is willing to protect the initial purpose of the drain ditch.

"I keep asking everyone at every level of government, 'where is the adult in the room?'" he said. "Not only does this affect me and my property but it affects all my neighbors upstream and any farmer who relies on these laws and protections to farm. This could happen to anybody." 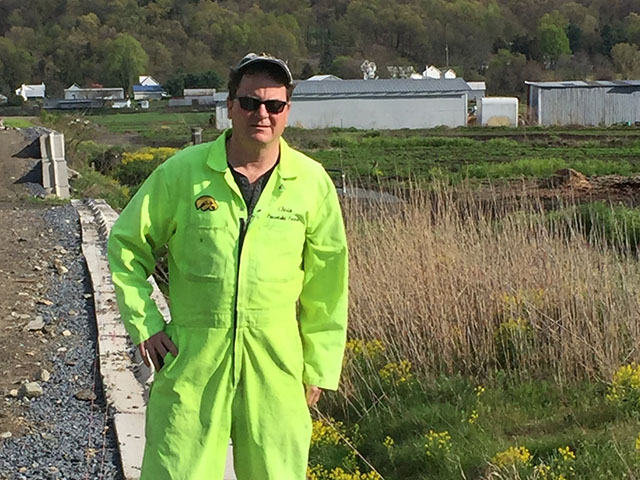