ROCKVILLE, Md. (DTN) -- The corn earworm populations in your cornfield have a dirty little secret.

Many of them may be carrying a damaging sexually transmitted disease (STD) caused by a nudivirus. In its wild form, the virus is capable of sterilizing one-third of the moths who carry it.

Now researchers from the University of Kentucky and a biotechnology firm called ParaTechs have succeeded in developing and testing a mutant version of the nudivirus that sterilizes 100% of the corn earworms it infects.

The scientists behind this discovery believe it could be a game-changing bio-insecticide that could greatly reduce the amount of chemicals required to control the earworm. However, many hurdles stand between them and this vision, including biological concerns, regulatory requirements and an urgent need for funding.

Depending on the crop, the corn earworm is mostly controlled with Bt proteins and insecticides. The mutated nudivirus could ease the reliance on chemicals, said Bruce Webb, an entomologist with the University of Kentucky, co-founder of Paratechs and the scientist who initiated the research project.

ParaTechs research scientist Kendra Steele did the work to hunt down the more damaging mutant version of the nudivirus. She exposed the wild virus repeatedly to chemicals and examined the aftermath for promising genetic mutations, a process known as chemical mutagenesis.

Webb's student, Alonna Wright, then worked with Steele to infect corn earworm moths carrying the wild version of the STD with the mutant version. The results were exciting -- 100% of the moths were sterilized and a vision of an extremely effective bio-insecticide was born.

Much research lies ahead, but past studies on the nudivirus have allowed Webb and his fellow researchers to craft a theory on how the virus could be deployed in commercial agriculture.

"We could release adult insects infected with the mutant virus, and they would sterilize both males and females they mated with," Webb explained. Like a poisonous gift that keeps on giving, the virus could also infect a portion of the eggs carried by female moths, Webb added. "The larvae will survive and have a low dose of viral infection that amplifies as they grow," he explained.

Once they were adults, those moths would be totally sterile but could still infect any adult they mated with -- the benefit of working with a sexually transmitted virus.

"It's like throwing a bomb into a field, but after the initial damage, then the next generation of earworm will have an echo of that bomb," Webb said. "That echo generation could be as big or even bigger than the number initially released into the field," he posited.

The corn earworm is a fairly prolific pest. In good conditions, it can crank out anywhere from two to seven generations. "If we knock out an early generation, that could have a tremendous impact," Webb said.

A common problem with current insecticides, both chemicals and Bt traits, is that insects can develop resistance to them.

But viruses are also living, changing organisms that could likewise evolve to combat insect resistance, Webb pointed out. Fighting resistance is in their DNA.

"That's why viruses are able to persist in populations -- they're in a sort of evolutionary arms race, competing to out-compete the resistance their host might develop," he explained. "We could manipulate the virus by selecting for viral resistance variants."

In order for the mutant STD virus to be used safely, more research is needed to understand how it affects other insects, Webb said. Beneficial insects such as honeybees and monarchs don't appear to be susceptible, but some fellow noctuid moths might be.

Being able to target very close relatives of the earworm could be a bonus. The corn earworm's cousin --Helicoverpa armigera or the Old World Bollworm -- is an aggressive and far more damaging global pest that was recently found in the U.S. The bollworm is known for rapidly developing resistance to insecticides used against it, so growers around the world would welcome a new control method, Webb noted.

However, in order to convince regulatory authorities that the virus is safe to release in the wild, its effects need to be very narrow and targeted, Webb conceded. He believes the virus is unlikely to harm species beyond the earworm and the Old World Bollworm, which have been known to mate with each other.

"There are multiple barriers to transmission between species -- even within the noctuids," he said. "The first is that the virus is transmitted sexually, and insects of different species very rarely mate."

One past study showed that the virus could replicate within closely related noctuid moth species, but it did not show that the earworm could pass the virus on to them or that the other noctuid moths could transmit it within their own species.

"This is something we plan to test but it is not high on our priority list right now," Webb said.

THE SEARCH FOR FUNDING

The virus's potential regulatory pathway -- the bane of many developing pesticides -- actually appears fairly smooth. Because chemical mutagenesis is not considered a genetically modified (GM) technique, the virus wouldn't have to overcome biotech regulatory hurdles.

Early discussions with a USDA regulatory assistance group suggests that registering the virus as a bio-insecticide would require a five-year timeframe once it was submitted, Webb said.

However, before they can tackle these additional studies and regulatory requirements, the team must secure funding, Webb said.

Their initial study was funded by a National Science Foundation Phase I grant. However, an NSF advisory panel declined to continue their funding, citing the dangers and difficulties of releasing a mutant virus into the wild as well as the scientists' lack of business experience.

Webb has been in contact with agricultural companies that have expressed interest, but the team needs more studies before they can prove the value of the virus to them.

He hopes the virus's potential will speak for itself in future funding bids.

"This will be a reduced risk virus, with no biological consequences beyond its target pests," he said. "A lot of features about it have tremendous appeal." 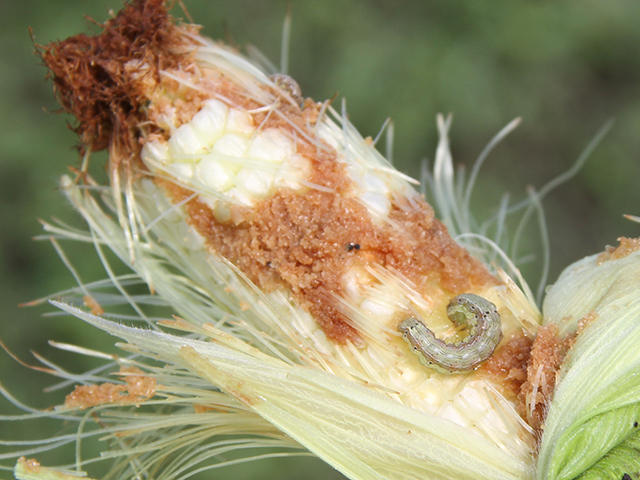