OMAHA (DTN) -- Although the cellulosic ethanol industry has had some challenges, there is hope for the year ahead.

For some Midwest farmers, cellulosic ethanol's launch in the past two years has allowed them to put their corn crops to wider use by providing stover to companies such as Poet-DSM, Abengoa and DuPont.

However, the road to full commercialization for cellulosic ethanol remains rocky even nearly a decade after the 2007 Renewable Fuel Standard took effect. Companies continue to work to hone their technologies despite doubts.

Whether the cellulosic ethanol industry can regain its federal policy footing to promote the further expansion of farmers' markets remains to be seen.

One company, Abengoa, filed for protection from creditors in November 2015 and has until March to file for bankruptcy or announce plans to stay afloat according to Spanish law. The U.S. Environmental Protection Agency expected Abengoa Bioenergy to be a major player in cellulosic ethanol production in the next two years.

With or without Abengoa, industry experts told DTN/The Progressive Farmer cellulosic biofuels will continue to develop if the right federal policy is in place.

DTN/The Progressive Farmer learned that Abengoa laid off employees at its cellulosic ethanol plant in Hugoton, Kansas, in recent months. The company has said publicly operations at ethanol plants in the United States are continuing as normal, but remains mum about the future.

Even if the industry is without the 25-million-gallon production capacity at the Hugoton plant, one industry analyst told DTN/The Progressive Farmer that EPA's decision to allow biogas production to qualify for D3 cellulosic renewable identification numbers, or RINS, means cellulosic ethanol has become a smaller percentage of the overall cellulosic volumes in the RFS.

Recent RFS cuts likely will trigger a reset provision to require EPA to make changes to the RFS statute itself. It's something industry officials say could indicate the agency is moving to further weaken the cellulosic portion of the RFS.

"Changes to cellulosic ethanol production forecasts would have less impact on RFS targets than forecasts for other sources of cellulosic biofuel," he said.

"At this point, we think another rulemaking to reset RFS volumes is not likely to occur during the rest of the Obama administration," Cheung said. "The next administration, then, would be responsible for resetting volumes should it initiate such a rulemaking."

A 2016 election year means the cellulosic ethanol industry might not see any major federal policy changes in the coming months. Innovative companies spooked by the RFS debate announced plans to build second-generation cellulosic plants in other countries in the past two years.

Cellulosic ethanol producers continue to face a number of challenges from high capital, production and enzymes costs, to struggling to establish continuous production.

Brent Erickson, executive vice president in charge of the Industrial and Environmental Section at the Biotechnology Industry Organization, which represents more than 1,200 biotechnology companies, academic institutions and state biotechnology centers around the world, said 2016 is pivotal.

"The technology has reached a tipping point, with the first-of-a-kind plants demonstrating commercial readiness and scalability while allowing for continued technology improvements," he said. "Unfortunately, EPA's two-year delay in finalizing the rule created untenable uncertainty and shook investor confidence in the RFS program."

EPA delays led to an estimated $13.7 billion investment shortfall in the advanced biofuel sector in the past couple of years, Erickson said, in an industry that depends on biofuel producers' willingness to invest additional money to build out cellulosic capacity.

"And for that, they need to see long-term growth in the market that doesn't cannibalize existing capital and market share," he said. "EPA's rule sends a disastrous signal in both regards."

If a company like Abengoa is unable to recover, Erickson said it doesn't necessarily spell doom for the industry. That's because "decades of experience and the expertise that Abengoa has developed will continue to be incorporated in other industry projects," he said.

Abengoa recently contracted with Fulcrum Bioenergy to conduct engineering work on the Sierra Biofuels plant in Nevada. That plant is expected to produce military-grade jet fuel and diesel from municipal solid waste. Though some cellulosic ethanol companies get more attention than others in the Midwest, Erickson said, there are numerous companies with other technologies waiting in the wings.

"There are still a number of technology developers who have been hoping and waiting for the investment window to reopen so that they can reach commercial scale, too," he said. "It's been near impossible -- even for EPA and DOE (U.S. Department of Energy) -- to predict which companies and technologies will win out."

For example, EPA "disregarded" companies like Ensyn and GranBio when setting the cellulosic biofuel volumes in the proposed rule last May, Erickson said, although Ensyn had already generated RINS and GranBio had started operations.

"The beauty of the RFS, as it was designed, was that it provided a large enough market to pull many different technologies to commercial readiness," he said. "EPA needs to correct its methodology in order to continue driving investment and scale-up of the industry."

The good news is the new volumes represent an increase compared to previous announcements, Cheung said.

The new RFS volumes might represent the first time annual average ethanol blending is above the so-called blend wall where total ethanol production exceeds the market, he said. Because doing so could lead to expansion of distribution infrastructure, it might allow cellulosic ethanol room to compete with conventional biofuels.

"Beyond just cellulosic ethanol, the final 2016 RFS represents the highest volumes that EPA has required since the program began," Cheung said. "In general, this means that the market would need to exceed historical maximum levels of ethanol and biodiesel consumption."

The final RFS includes a list of companies expected to produce cellulosic biofuels by 2016 to some degree.

Each year, DTN presents an outlook series on what is expected for the year ahead in various areas of agriculture. This is the 11th story in a series DTN is running that looks at what farmers can expect as the hot topics for 2016 in areas such as farm finance, land prices, ag and the environment, agricultural policy, crop inputs, livestock, transportation and others. We welcome your feedback on what you think the year will be like at talk@dtn.com. 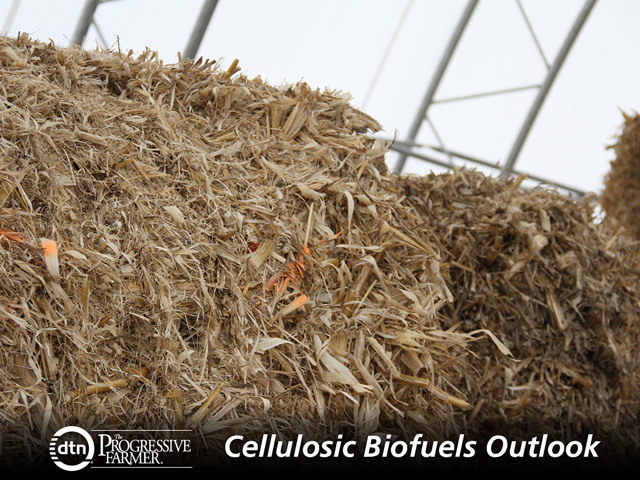