You've heard it said that the one thing you can't change is the weather, and scientists in the Corn Belt have no intention of trying to do so. Instead, they hope to develop more resilient and sustainable crop-management practices to help corn growers respond to increasingly erratic and extreme weather events.

These scientists are working under the umbrella of the Sustainable Corn Project (www.sustainablecorn.org), a five-year program launched in 2011 with $20 million from the USDA National Institute of Food and Agriculture.

"Farmers recognize that variable weather and climate are key factors affecting not just their economics but also the soil and water resources necessary to support and sustain a healthy farm enterprise," explained Lois Wright Morton, the project's director and Iowa State University (ISU) professor of sociology. "The underlying premise of the [program] is that farmers are problem-solvers. With sound science, farmers are better able to identify and develop strategies necessary to adapt."

Researchers are collecting data from 35 sites in eight Corn Belt states to try to pinpoint the effect of extreme fluctuations in temperatures and rainfall on corn plant growth, yields and grain quality under various management practices. In turn, they hope to develop corn-based systems that retain yields but also protect the soil, build organic matter and carbon levels, and reduce nitrogen losses that contribute to water-quality issues and greenhouse gas emissions.

Dennis Todey is the South Dakota state climatologist, based at South Dakota State University, and a principal investigator with the project. He pointed out the causes of climate change are still widely debated, however few farmers deny they're experiencing wide swings of precipitation and temperatures at critical stages of corn growth. That's one reason the project scientists are concentrating on helping farmers handle shifts in climate that are already occurring in the Corn Belt, not on what may or may not happen in the future.

"Across the Corn Belt, rainfall rates and totals have increased," Todey explained. "Variability and increasing intensity of precipitation creates problems for growers. Heavy rains early in the season can interfere with timely planting and seed emergence; in the fall, it creates drying and harvest problems.

"In contrast, crops are still often stressed by limited moisture during the critical middle season of plant growth, adding to the variability issues. By the same token, late-spring snowfalls can delay planting, while extremely high temperatures in midsummer can interfere with proper pollination," he pointed out.

Trying to balance the good and bad of climatic change is one reason researchers are studying several cropping practices. They include winter cover crops, reduced tillage, corn/soybean rotation, extended rotations such as corn/soybean/alfalfa, and drainage water and nitrogen-management techniques.

-- When growing a rye-cereal cover crop in a corn/soybean rotation in Iowa and Indiana, scientists found during the drought of 2012 that the cover crop didn't contribute to lower soil-water conditions. "The rye had no impact on soil-water conservation when biomass was low nor significantly increased soil-water conservation when the primary crop was most sensitive to water stress," Morton explained. In fact, research indicates the mulching effect and shading after the cover crop is terminated could help improve soil moisture under dry conditions.

-- If farming practices known to build soil organic matter show increased long-term carbon storage in field tests, they could provide farmers with options for increasing the fertility of their fields even with reduced fertilization rates. In addition, soil organic matter could contribute to reductions in greenhouse gas emissions.

-- Purdue University scientists are focusing their efforts to better understand the varying impacts of drainage-water management on soil moisture and crop yield, as well as on soil loss and reduction of nitrates into waterways and the Gulf of Mexico.

"Five years is really a short time to draw robust conclusions, but we have a great start," Morton said. "More years of data are needed to account for the high variability in precipitation among years and within the region.

"The baseline methods and protocols offer an important foundation for future researchers to continue to add to the database and develop models and interpretations of our findings that have greater use to farmers as they adapt to changing conditions," she maintained. 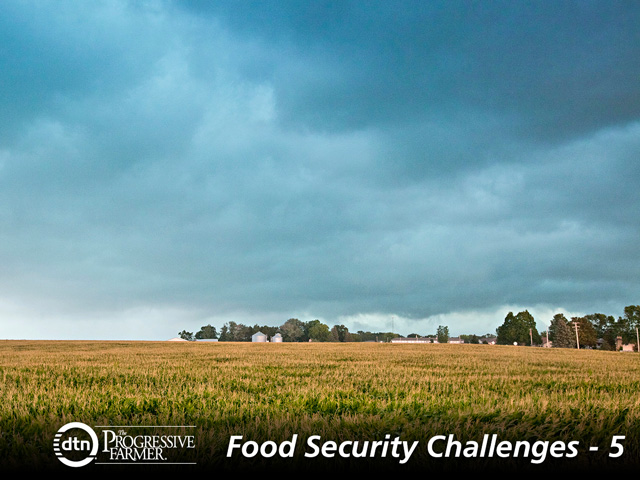