Farmer and entrepreneur Lance Donlon is reminded every day about his intimate connection to agricultural history.

John Froelich, the man credited with building the first gas-powered traction engine in 1892 (later known as a tractor), used to reside on Donlon's farm in Froelich, Iowa. The unincorporated town was named after Henry Froelich, John's father, who seeded a grove of German white pine trees about 150 years ago that still tower over and protect the acreage today.

Donlon operates businesses in Froelich, where John Froelich ran his enterprises. Farming, earth-moving, trucking and equipment repair for Donlon, while Froelich owned a grain elevator and mill, a well-digging business and a grain-threshing operation in the late 1800s. Donlon continually strives to be more efficient, much like Froelich, who knew there was a better way to raise and harvest crops than relying solely on steam and the actual power of a horse.

The desire to be more productive prompted Froelich to invent a machine that changed agriculture forever.

"With John Froelich's invention of the first gasoline-powered tractor that went forward and backward, the mechanization of farming exploded," Donlon says. "He created the next generation of farmers that are very productive, which is needed because there are less and less of us growing food today."

As Donlon cleaned out a bin of soybeans recently using a grain cart pulled by a John Deere 4955 tractor, a distant relative of John Froelich's traction engine, the significance of the community and the invention hit home.

"This is such a special place," Donlon explains. The town of Froelich only has a handful of residents but is aptly nicknamed Tractor Town USA. "Keeping [the town's] history alive is so important ... we don't want to lose it."

Donlon is one of 11 members of the Froelich Foundation for the Preservation of Farm Tractor History Inc. board of directors. The nonprofit operates the Froelich Tractor and 1890s Village Museum, filled with information and artifacts about John Froelich's first tractor -- including two replicas -- and life in the late-19th century.

About 1,000 people annually visit the museum, tucked away in the rolling hills of far northeast Iowa, just off Highway 18, says Denise Schutte, foundation executive director and chief tour guide. "It's [attendance] not a lot, but we're continually working to get word out," she adds.

A 2021 History Channel show called "Tractor Revolution" featured the creations of John Froelich and other ag visionaries. The episode, part of History Channel's "The Machines That Built America" series, examined the development of the tractor and the people behind it. The works of Benjamin Holt, of Caterpillar fame, and Henry Ford were also highlighted.

The TV show provided a brief boost to John Froelich's notoriety and museum attendance, Schutte says. But, she adds, all the information in the program wasn't entirely accurate.

"This is the place people will get the real story. We have lots of information from multiple sources," she continues. "My desire is to help people learn the true story of John Froelich's invention."

Based on museum documents, here is an abbreviated summary of Froelich tractor history:

John Froelich operated a custom-harvesting business in the late 1800s. The 45,000-pound steam engine he used to power his thresher was hard to transport, often got stuck and was a fire hazard in dry fields in Iowa and South Dakota. Finding enough wood or coal to power the machine was a chore.

The inventive businessman decided a lighter gasoline engine such as the ones that powered his grain elevator, mill and well driller could solve the problems associated with steam-powered tractors. And, gasoline, a byproduct of making kerosene, was cheap and plentiful at the time.

In early 1892, Froelich and his assistant and blacksmith, William Mann, went to work on the new gas tractor. The word "tractor" wasn't officially coined until 1903 by the Hart-Parr Co., according to the National Museum of American History.

Froelich bought a new single-cylinder Van Duzen gas engine, which reportedly produced 14 hp. Working in the grain elevator's workshop, the duo mounted the engine on a wood frame and running gear of a steam engine. Many existing shafts, gears and pulleys were used, but Froelich designed and built many other parts to make the tractor work. This included a water-cooling system, front steering and a reversing clutch.

"It was a tractor before its time," Schutte says.

Froelich and Mann took the tractor outdoors as a crowd gathered. At first, they couldn't get the engine started; but Mann had the idea of wedging a rifle cartridge in the priming cup and hitting it with a hammer. The small explosion ignited the gas and oxygen in the combustion chamber to start the motor. Froelich drove the tractor to the delight of the crowd.

After a local threshing demonstration using the new tractor, Froelich shipped the machine that was nearly 17 tons lighter than a large steam engine to South Dakota in September 1892. It provided power to thresh about 72,000 bushels of grain.

The early success prompted Froelich and a group of investors to form the Waterloo Gasoline Traction Engine Co. in 1893 for $50,000 to make more gas tractors. Froelich was named president. In its first year of production, the company only managed to manufacture four tractors, far short of the initial goal. Only two were sold, and both were returned due to starting and mechanical problems. Initial efforts to build a practical tractor failed.

The company reorganized in 1895, now called the Waterloo Gasoline Engine Co. Froelich left the company because it focused on stationary gas engines, not tractors. The company, though, continued to work on tractors and improve Froelich's design. It created the Waterloo Boy model R in 1914 and then the model N, which were both retail successes.

John Deere purchased the Waterloo Gasoline Engine Co. in 1918 for nearly $2.5 million, which is about $40 million today. John Froelich, who died at age 83 in 1933, didn't see a dime of that or cash in on his invention. Today, John Deere is the world's largest tractor manufacturer.

"John Froelich had a creative, inventive mind," Schutte exclaims, noting the 14 patents recorded in his name to improve engines, farm equipment and everyday life, such as a dishwasher. "He did forever change agricultural history."

-- The Froelich Tractor and 1890s Village Museum is part of the Silos and Smokestacks National Heritage Area, in Iowa, which has 115 partner sites that tell the story of agriculture, agricultural history and farm life. Learn more at https://www.silosandsmokestacks.org/…

-- For more information about the Froelich Tractor & 1890s Village Museum, including days and hours of operation, and the Froelich Foundation, check out https://www.froelichtractor.com/… 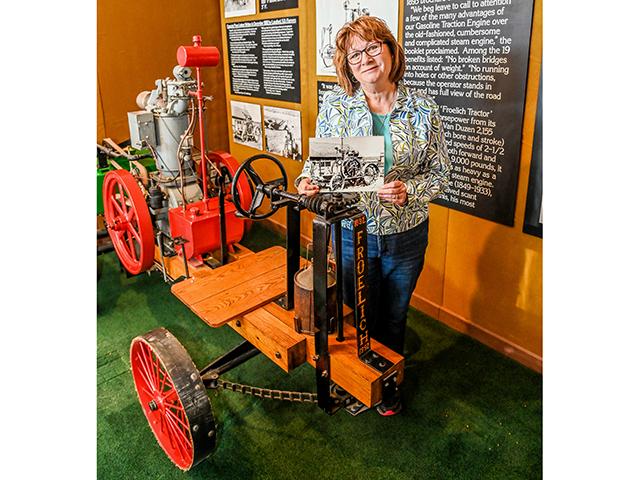