CEO Scott Wine says the CNH tech strategy supports customer-inspired innovation. "We have incredibly, capable, smart engineers," Wine says. "But, we're [also] listening to customers, understand how they use our products and driving that customer-inspired innovation to bring solutions we can sell, they can [use], creating value [for both]." It's a process, Wine says, accelerated with technologies developed by CNH-owned Raven Industries.

For example, CNH and Raven Industries introduced the Case IH Trident 5550 applicator with Raven Autonomy this past fall. The Trident, from development to product introduction in less than a year, combines driverless technology with an autonomous spreading platform. The Trident is operating in North America with limited availability in 2023.

"We're using their capabilities to go faster and do more for our customers," Wine says. CNH sees methane and electricity as important fuels for its equipment and its sustainability strategy. The manufacturer purchased a minority stake in U.K.-based Bennamann. Bennamann's technology converts manure into liquefied fugitive methane (LFM) by transferring it from a dairy farm, for example, to a covered slurry lagoon or tank. There, emitted fugitive methane is captured and converted into liquefied methane.

Here are technology pieces CNH rolled out in Arizona:

-- Driver Assist Harvest Solution: This technology has a Raven Autonomy control that allows combine operators to call for an autonomous tractor with grain cart to come alongside for on-the-go unloading. CNH is demonstrating the system for Case IH and New Holland.

-- Baling Automation: Unveiled as a preproduction technology for New Holland large square balers, this features a LiDAR sensor to scan the windrow for density, volume and direction. Tractor and baler use the input to control steering, speed and baler position. LiDAR determines distance by laser.

-- T4 Electric Tractor: The stylish all-electric New Holland T4 Electric Power unit has 4WD and a 75-hp motor. The tractor's battery pack delivers up to a full day of operation and can be recharged in an hour. Electrical outlets support tasks such as welding, and it doubles as a backup generator.

The prototype tractor combined development work at CNH facilities in the U.S. and Italy, and with collaboration from Monarch Tractor -- an electrified ag innovator based in California. CNH holds a minority stake in Monarch. Production of the electric T4 is expected by the end of 2023. 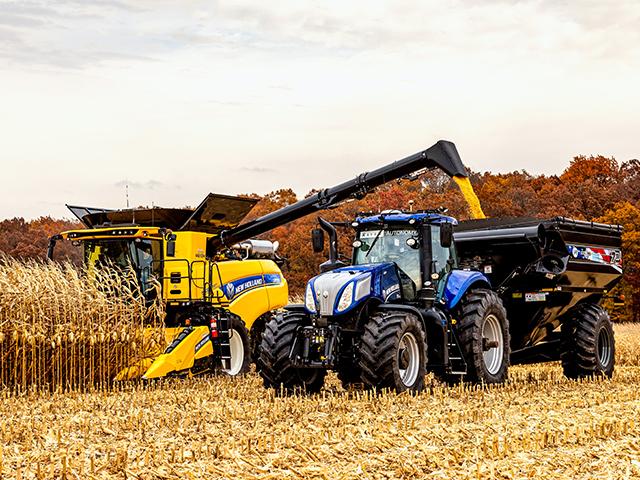