I don't know if you've heard, but the world is about to have a birthday, of sorts. Sometime this November, the world's population will strike 8 billion, and I wonder how many of us will even notice.

I was glad to see DTN Editor Emeritus Urban Lehner noticed. His Sept. 21, 2022, blog on DTNPF.com, "The Techno-Optimist's Dilemma" (see https://www.dtnpf.com/…) discussed some of the challenges we face trying to increase food production when current methods rely heavily on fossil fuels that many contend need to be reduced. Thank you, Urban, for introducing us to the Canadian scientist Vaclav Smil and his book "How the World Really Works."

With supporting help from Google and thanks to Urban and Professor Smil, I'd like to sketch a brief history in appreciation of how we got to this momentous milestone of 8 billion people.

I'll start with Smil's early example from 1801 in the Genesee Valley of western New York, three years before the first billion people appeared on the planet. At that time, all the work of planting and harvesting wheat required 150 hours of human labor and 70 ox-hours per hectare, or, as we would say in the U.S., 61 human hours and 28 ox-hours per acre.

In 1801, wheat yielded 15 bushels per acre, and the only inputs were sunshine, rain and the exertion of muscles, both man and beast. Wheat production in 1801 was not much different than it had been the previous 2,000 years.

Fast-forward to 2021, and Smil's example moves to Kansas, the largest wheat-growing state in the U.S. With the benefit of large machinery, hybrid seeds, fertilizers, herbicides and fungicides, the wheat yield is now 3.5 times larger, or 52.0 bushels per acre. This next statistic sounds low to me, but Smil says it takes less than an hour of labor per acre to produce the season's wheat crop -- no oxen required.

For production on the farm to go from 89 hours of man and beast labor per acre to less than an hour in a relatively short 221 years is simply miraculous. To think that yields have only increased 3.5 times is also mind-boggling, as it shows just how much progress has relied on the contributions of machinery and fossil fuels in several aspects of agriculture.

We don't have statistics on how many of the first billion people in 1801 were undernourished, but it was likely quite high. Smil explains that the United Nations' Food and Agricultural Organization (FAO) estimated 25% of the world's population was undernourished in 1970, a year in which world population neared 4 billion, and there were few tractors in China.

Now, in 2022, with the population set to hit 8 billion, the percent of undernourished has dropped to 10%, up from a low of 9%, reached before the global pandemic. Fifty-seven percent of the population now lives in urban areas, and some of those people work in industries that produce the machinery and equipment modern farms need. Overall, the population is increasingly dependent on a shrinking share of farmers to produce food from arable land that has dropped from 77/100 of an acre per capita in 1970 to 44/100.

To say that we have big challenges ahead is an understatement, and I don't know what the answers will be. The one thing that is clear is that we are going to have to learn more than we know now. At this momentous occasion of becoming a world of 8 billion people headed to who knows how many more, I find it entirely appropriate to pause in gratitude for the miracles of production that have made decent lives possible for so many. As my dad would often say during difficult times, "You gotta have faith." Yes, you do, Dad. You sure do. 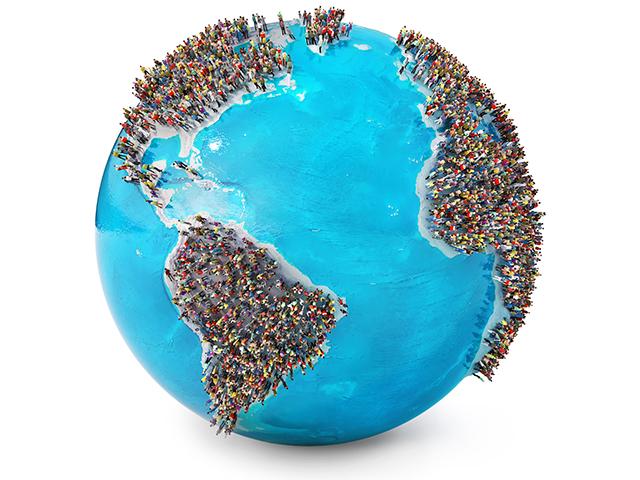