"Traditionally, the need to irrigate has been determined by measuring water availability in the soil and estimates of moisture being pulled through the plant by evapotranspiration -- a function of atmospheric aridity, solar radiation and wind," says Trenton Franz, a University of Nebraska associate professor of hydrogeophysics. He's a co-developer of the algorithm, along with Kaiyu Guan and his colleagues at the University of Illinois.

"Because understanding plant-water relations is a prerequisite for sustainable irrigation water use, we also included a 'plantcentric' variable to the algorithm based on plant hydraulics and stomatal response to moisture deficits and atmospheric aridity," Franz continues.

By monitoring corn plants under water stress the last two years, researchers were able to estimate when stomata in the leaves began to limit in-plant moisture movement and intake of CO2 (carbon dioxide, a vital building block for photosynthesis) at given atmospheric vapor pressure deficits (VPD) to signal the need for irrigation applications. The study showed stomatal water-conservation response had little correlation to soil-moisture levels but was dominated by VPD.

"The innovation of the initial study was to apply the relationship between soil moisture, atmospheric aridity and the corn plant's subsequent response," Franz explains. "We found the proposed method provided a large improvement over existing soil-moisture-only irrigation metrics and, thus, could have significant contributions to sustainable irrigation practices."

The study found the algorithm-guided irrigation scheduling could reduce water use by 24% while maintaining crop yields and increasing profits by 11.2%.

The algorithm, called Supply-Demand Dynamic (SDD), is being tested this year at two locations in Nebraska using data from Nebraska's Eastern Nebraska Research, Extension and Education Center, near Mead, and West Central Research and Extension Center, near North Platte, to calibrate the model tested at other sites.

Versions of SDD are also being evaluated as part of the UNL-TAPS (University of Nebraska Testing Ag Performance Solutions), at North Platte. There, teams of researchers, growers, students and industry representatives test commercially available technology and data to compete with one another in blind-test research studies at one location to determine the best yields, the most efficient use of inputs and the most profit.

"We were very pleased to get the algorithm included in TAPS, because it helps build grower confidence in the tools we're trying to develop to improve water-use efficiency here in Nebraska, as well as for growers in the U.S. and around the world," he adds. "The TAPS results illustrate head-to-head comparisons against other available scheduling methods to show the algorithm's utility."

In 2021 TAPS results, one version of the SDD algorithm saved irrigation water use in corn by 14.2% but showed a 4.7-bushel-per-acre yield penalty. A more conservative model saved 5.1% applied water, boosted yields by 1.9% and showed a 4.8% increase in overall profits.

"Using both supply and demand measurements, and making decisions based on the two systems can be fairly complicated," he continues. "This algorithm combines both water supply and demand measurements simultaneously, along with plantcentric responses to water stress, in a single, simple-to-use tool to better manage irrigation application decisions."

Franz says boosting water productivity and irrigation efficiency is of prime importance in Nebraska, where 90% of the state's agricultural water use is attributed to irrigation. The technology can reduce water consumption in crop production, which is vital across the U.S. and the world.

"Achieving greater water efficiency has growing importance in the face of global climate challenges. If our follow-up testing confirms the easy-to-use algorithm's practical use, the technology could drive improved water efficiency among the 85% of growers who don't currently use soil-moisture sensors," he asserts.

Studies show growers not using soil-moisture probes cited the cost and operational disruptions associated with installing and servicing monitors throughout the growing season as major impediments to their acceptance.

"It's the 85% of irrigators who aren't too interested in using soil-moisture probes who can really make a big difference," Franz explains. "While good probe management and irrigation scheduling might save 4 inches of water, this algorithm might save 1 to 3 inches but over a wider number of growers who may be willing to adopt it."

The tool has been licensed to HabiTerre, a North Dakota data-management firm specializing in optimizing land, water and carbon resources for agriculture.

Nick Reinke, HabiTerre CEO, says his company sees potential in working with major irrigation-equipment suppliers to include the algorithm in their irrigation software portfolios rather than developing a stand-alone product that would work outside proprietary water-use-efficiency products.

"Development of the algorithm is mature and lends itself well to smartphone and center-pivot telemetry, and if the need arises, HabiTerre could have a commercialized product ready for use in six to 12 months," he surmises. 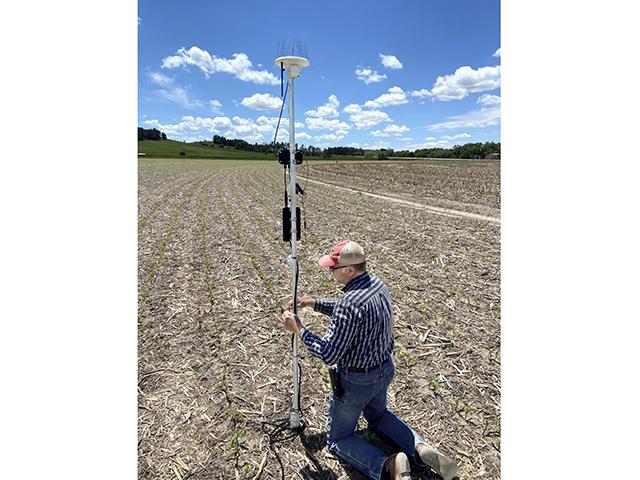