Driving north from near the little town of Freedom and the adjacent Cimarron River, red-dirt hills and canyons covered with thirsty cedars strangle what was once Oklahoma's western boundary of native tallgrass prairie.

But, as you reach the hilltop, near a sign pointing westward to Jackass Ridge Road, an "island of native range in a sea of invasive eastern red cedar" spreads out to the horizon.

That's the vivid description of the Lazy KT Ranch, in northwestern Oklahoma. The view across 1,525 acres is likely similar to the prairie that the Plains Indians roamed before the advent of barbed wire and the moldboard plow.

Today, the ranchland is thriving thanks to intensive management that includes controlled burns and grazing. The ranch, operated by Katie Blunk and her husband, Michael Horntvedt, supports 100 well-fleshed Black Angus cows and typically 30 replacement heifers and 30 private-treaty bulls per year.

Returning the land to production methods for which it was originally suited -- grazing by nomadic animals -- and making sound, scientific and genetic choices on the quality of those animals recently netted the Lazy KT the 2021 Leopold Conservation Award for Oklahoma in recognition of outstanding conservation efforts.

"In the scheme of life, we are not a huge ranch," Blunk says. "But, we have created a very sustainable operation producing desirable cattle we can market for enhanced value while at the same time using them to care for the land."

Cedars continue to dwindle from the pastures, and those that escape cutters and prescribed burns are clustered in draws and nearly inaccessible canyons.

Wildflowers abound in the restored native pastures carpeted with big and little bluestem, buffalograss, switchgrass, Indiangrass and sideoats grama. More than 20 springs have reappeared in the rolling hills, and Moccasin Creek, which meanders through the property, runs year-round with clear, cold water.

The "return to rangeland" hasn't been easy, Blunk and Horntvedt admit. They have made rapid strides in restoring the land to a native prairie ecosystem while establishing a sustainable Angus seedstock business. Improvements were made over the past 10 years in a semiarid climate, where 18-acres per cow/calf pair is a typical stocking rate.

Their restoration began with the cedars. "Eliminating the cedars (actually a juniper) has been the biggest improvement," Horntvedt explains. "They consume so much water and shade so much grassland, they literally choke out the pastures."

As the available water returned to the property, the couple built, recovered or reengineered 16 stock ponds strategically placed to provide easy access to water for the cow herd regardless of where they might be in the ranch's rotation plan.

Also, four new water wells, each equipped with a solar-powered pump, provide a steady flow of fresh drinking water to a gravity-feed system of freezeproof stock tanks located across the western half of the ranch.

Before the couple reintroduced fire to the cedar-control regime in 2016, Horntvedt estimates he spent 1,000 hours in a skid-steer cutting cedars with a shear -- continuing the mechanical removal of the invasive species begun in 1995 by Blunk's mother.

The land has been in Blunk's family for three generations. After a 30-year career as a veterinarian with the USDA-APHIS Veterinary Service in Nevada, she and Horntvedt married in 2009 and moved to the ranch in 2011 just as a major drought gripped the Great Plains. The couple began their second careers on the land when her mother, Rose, now 87 and living in nearby Alva, welcomed their "boots on the ground."

Blunk's mother became active in managing the land in 1995 when her husband died. "She was appalled on her first visit to the property when she realized it was choked with cedar trees and was suffering from years of overgrazing. She immediately began removing cedars and working to restore some of the ponds on the ranch, opening the doors to the couple's conservation efforts.

"We knew the value of prescribed burning and wanted to use the practice when we moved here, but the ranch was deep in a drought, and there wasn't sufficient grass to burn," Blunk recalls.

Horntvedt, who grew up on a grain and timber farm in northern Minnesota, has welcomed the chance to return to land stewardship after a career in financial-planning services. "It was tough having to wait several years to reintroduce effective prescribed burns to the ranch," he says. "We used the time to develop a strategy, build fire breaks and keep our original 23 head of cattle sequestered off the pastures we needed to burn."

The couple lit the first fire in 2016 to renew their grassland and control young cedars and broadleaf brush. Since then, they have tried to use fire on at least a third of the ranch each year.

Working with like-minded neighbors in their prescribed-burn association along with local fire-fighting agencies, the couple has become a driving force in restoration of prairie ecosystems in the area. The return of regular burning -- similar to what occurred naturally when bison populated the area -- has resulted in major improvements to the ranch's carrying capacity over its seven large pastures.

In 2021, the couple adopted patch-burning techniques to strategically burn a mosaic of smaller areas within larger pastures to facilitate more intensive grazing and provide fresh bursts of forage in different areas of the ranch. Such practices also promote the increase of pollinator plants, which provide food and reproductive habitat for dwindling populations of pollinators such as monarch butterflies, bees and other nectaring species.

The fires have also helped the Lazy KT become a prime habitat for the Lesser Prairie-Chicken, currently listed as endangered by the U.S. Fish & Wildlife Service. The habitat enhancement also has been beneficial to other rangeland species such as the Texas Horned Lizard, badger, burrowing owl, white-tailed and mule deer, Scaled Quail, dung beetle, Scissor-tailed Flycatcher and other upland bird species.

Ensuring a dependable and sustainable supply of forage is the foundation -- and the success -- of the couple's decade-long renovation of the Lazy KT.

Just as important, once grass is available, is selling a beef product that consistently provides a clear profit margin.

To command higher returns for their management and labor, the couple invests heavily in genetics from the Gardiner Angus Ranch (a recognized leader in Black Angus breed improvement) and applies technologically sophisticated practices to their breeding efforts.

Using a 21-day fall-calving window, Horntvedt and Blunk wean in the spring and use current grass conditions and expected weather patterns to target herd size for the coming season. They monitor estimated forage production with a set of fenced exclosures to keep tabs on grazing resources across their pastures.

"If we come into a spring where grass is sparse and the weather doesn't look promising for moisture, we can easily pull our numbers back to 60 head to match the stocking rate to grazing conditions," Horntvedt explains. "Because of that, we can avoid running out of grass and the pain of liquidating in a stressed market, and still command a premium price because of our quality." 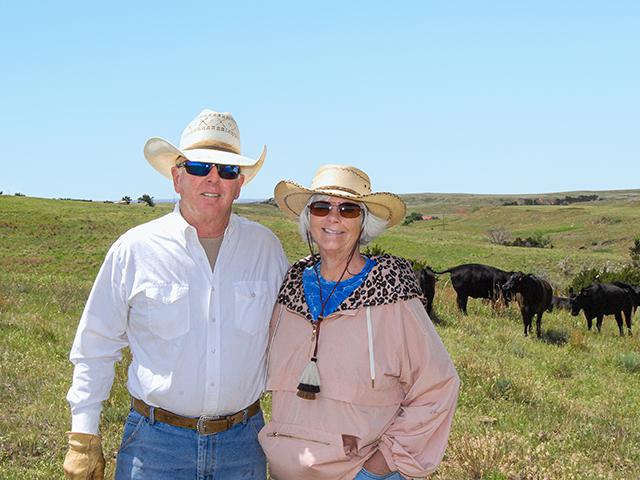