Weeds getting the best of herbicides is nothing new to farmers. But, as scientists dig into how weeds dodge damage from chemicals, they are making some discoveries that could change how farmers control weeds in the future.

This new dynamic was on display when university researchers in Illinois and Tennessee confirmed separate populations of dicamba-resistant waterhemp in the fall of 2021. The Tennessee population was a classic case of weeds evolving resistance in the face of heavy use of a single chemical, in this case, dicamba, University of Tennessee weed scientist Larry Steckel explains.

However, the Illinois population revealed a surprise: The weeds weren't from a field with heavy or regular dicamba use, but they showed five- to tenfold levels of resistance to the chemical. The root of these waterhemp plants' resistance may involve a new mechanism known as metabolic resistance, says University of Illinois weed scientist Aaron Hager. It lets weeds escape herbicide damage by rapid metabolism of a chemical, allowing them to survive multiple classes of herbicides -- even those to which they have not been exposed.

The Illinois waterhemp population was also resistant to five other classes of herbicides, and there is evidence of cross-resistance between its multiple herbicide-resistance traits, adds Pat Tranel, a University of Illinois molecular weed biologist working with this population.

"This kind of cross-resistance really hampers us in our ability to tell farmers what to do," he explains. Here's the rub: Mixing herbicide modes of action will not prevent cross-resistance or metabolic-resistance, and may encourage it by favoring weeds that can survive many classes of herbicides.

In Montgomery County, Tennessee, the waterhemp collected from fields in the Cumberland River bottoms are showing roughly four-and-one-half-fold levels of resistance to dicamba, says Steckel, who worked with Purdue University scientists to confirm his findings. The waterhemp populations are also resistant to three other classes of herbicides.

The Tennessee population of resistant waterhemp is almost certainly the result of widespread, continuous use of dicamba, Steckel says. Almost two decades ago, when glyphosate could no longer control horseweed, dicamba use in Tennessee began to ramp up.

Use of the herbicide soared when dicamba-tolerant (Xtend) crops were uniformly adopted by the state's farmers starting in 2016, he says. In the meantime, the herbicide continued to be used in other row crops such as corn. "We've been priming the pump," he says. "I think that's why we're seeing dicamba-resistant weeds in our state quicker than in others."

"It is what many of us predicted would happen, because we're not starting from scratch with dicamba" with Xtend crops, Hager says. "We've already had decades of selection against it, because we've used it for so long in agriculture."

The situation drives home the need for farmers to keep weed populations as low as possible, Tranel points out. "The fewer weeds that are there, the fewer rolls of the dice for evolution to work and find a solution to the herbicides," he says.

Given the development of metabolic resistance in weeds, nonchemical control options will need to play a bigger role in weed management of the future, Hager adds.

"The closest you can get to zero weed seed at the end of the year, that's the winning strategy," he says. "Maybe that means harvest weed-seed control or maybe hand-roguing weeds."

RESISTANCE IS A ONE-WAY STREET:

There is no simple way to undo herbicide resistance in waterhemp, University of Illinois weed scientist Aaron Hager says. Why? Blame the lack of a fitness cost associated with most of its herbicide-resistance mechanisms.

That means waterhemp that evolves target-site resistance or metabolic resistance doesn't pay any penalty for those traits -- they aren't weaker, smaller or hampered by lower seed production.

"So, there is no reason for those resistant genes to go dormant or disappear in a weed population even in the absence of the herbicide," Hager says. That means if a farmer avoided use of glyphosate on his farm for decades, there is no guarantee glyphosate-resistant traits wouldn't remain in the farm's populations of waterhemp ready to overcome that herbicide if it is used again.

"The only certain thing we have to tell growers is to ensure that by the end of the season, there is no weed seed left," he adds. That will mean adding nonchemical weed-control options, ideally several. "Cultivation, cover crops, going back to hand-pulling, harvest weed-seed control -- they can all help, though no one of them by themselves is the solution," he concludes.

Herbicides work by binding to a target site in a plant, often an enzyme. For example, an ALS herbicide (like Classic or Pursuit) targets a key enzyme in weeds that help them create amino acids necessary for the weed's survival. Without the proper production of those amino acids, the plant withers and dies.

In target-site resistance (TSR), weeds have a genetic mutation that alters that specific target site. For example, the site protein could change so significantly that the herbicide can't bind to the weed and do its work, or the plant could produce so many additional copies of the target-site protein that the herbicide can't overcome them all. Either way, the result is the same: The weed does not die.

The chances of TSR happening become greater when the same class of herbicides is used against a weed population again and again. Think of target-site resistance as the classic, old-school weed resistance. It followed the introduction of synthetic herbicides with farmers battling the first triazine-resistant weeds in the 1960s and 1970s.

The symptoms of TSR are usually straightforward -- for example, a live weed right next to a totally dead one. This is because target-site resistant weeds often accumulate high-dose levels of resistance and are able to survive anywhere from two to 1,000 times the labeled dose of a herbicide.

To avoid or delay TSR developing, scientists have advised farmers to use multiple classes of herbicides against weed populations, ideally in the same tank mix, both before and after weed emergence.

The most concerning type of nontarget site resistance is called metabolic resistance. Here, weeds learn to rapidly metabolize a herbicide before it can kill the plant. Because the metabolic process is not always specific to any one herbicide, weeds with metabolic resistance can become tolerant to classes of herbicides they have never even encountered. That's how researchers believe waterhemp in the Champaign County, Illinois, field may have become resistant to dicamba, in a field with no recent history of that herbicide's use.

Metabolic resistance can be subtle and hard to identify in the field because it doesn't always have the same high-dose levels of resistance seen in target-site resistance (TSR).

So far, it remains a bit of a mystery to scientists, says Aaron Hager, University of Illinois weed scientist. "We still don't understand exactly how this evolved -- we haven't even identified what genes are responsible for it yet," he explains. That makes it hard to tell farmers how to avoid it.

Some weed scientists are beginning to suspect that the methods prescribed to avoid TSR -- using multiple classes of herbicides in the same tank mix -- may have encouraged the rise of metabolic resistance by favoring weeds that could outsmart many herbicides simultaneously. Some European scientists recently published a paper on just this theory. Visit https://www.nature.com/… for more. 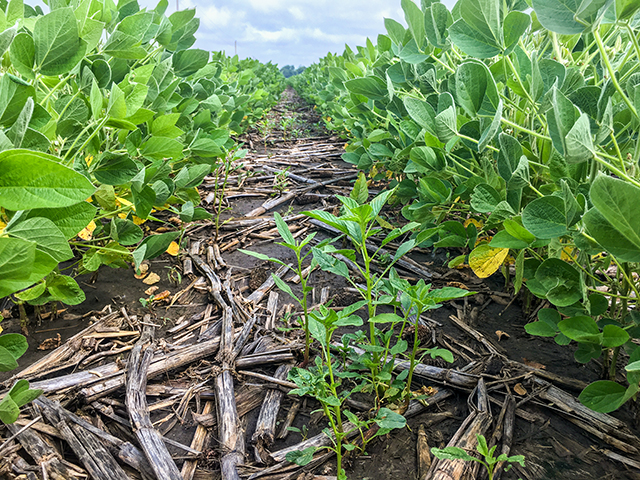