The day is already seven hours old when the Osinga family gathers at 10 a.m. for daily coffee. William and Astrid Osinga sit down at a thick and weather-worn table with William's mother and father, Margie and Auke, his brother Michael, and his wife, Mariel. For mid-July in east Texas, the covered, wrap-around porch catches a nice breeze.

The conversation is light -- family, weather, guest stepping on the German Shepard -- and this farm, W&A Dairy.

A dairy farm, as any dairyman will attest, sucks the hours out of the day. Two milkings daily -- three in spring and fall, cool weather permitting. Every day begins at 3:30 in the morning. The second milking is at noon if the Osingas are doing that third milking, and then at 3:30 in the afternoon. Each milking takes five to six hours. Then, everyday work around the farm.

A coffee break is a welcome reprise.

There is a cool casualness about William on his 500-head dairy, south of Winnsboro, halfway between Dallas and Shreveport, Louisiana, which is hard to square as a visitor finds himself running after William. William mixing feed. William motoring away from the loafing shed. William releasing -- unexpectedly -- a flood of water to clean the lane between the loafing shed and holding pen. William milking cows in his Double 10 Herringbone Parlor with one employee and 110 cows per hour. All this before 7 a.m.

He sums up his work. "No one would ever choose to work seven days a week, 365 days a year, every holiday, and getting paid once a month and not really knowing what you're going to get paid; it would be impossible for most people," William says. "We work with slimmer and slimmer margins. We try to produce the best milk we can." And, he adds, "There is some luck in being a dairy farmer."

The Osingas work the margins and scrape costs down to as low as they can.

-- On equipment. William is an equipment flipper on the side, purchasing old equipment, making repairs and selling them for profit or keeping them for the farm. "I haven't been to an equipment dealer in five years," he says. His most recent project, a once-dead Dresser bulldozer, crawls alive again out of the shed on this July day.

-- On debt. "Our near-term goal is to reduce our short-term debt," he says. "Keeping debt low strengthens our equity, important to our further success."

-- On calves. For seven years, the Osingas have been breeding their cows to Angus, Brangus, Brahman and Hereford bulls. "We take the calves away from the mom once they're 3 days old, after they've had the colostrum, and then we sell them to local buyers by word of mouth," Astrid says. "They put on good weight and have 50% less mortality -- the calves perform better than a straight dairy breed." Each calf is bringing $250 to $350 on the private market compared to dairy calves bringing $50 to $175. The income is good. The management practice is practical. William buys replacement cows for less than he could raise them. "Good springing Holstein heifers generally cost $1,250 to $1,350 delivered with a guarantee. I can't raise a cow for that price on my operation."

AN OFFER OVER COFFEE

William began dairy farming in 2012, a time in the dairy industry when banks did not view dairying as a good investment. For the Osingas, that was an upside: inexpensive cows. They began with 100 Holsteins. "My first month of milk produced $12.80 a hundredweight; feed was $11.75 a hundred. There was little money left over from paying the bills."

But, as milk prices improved, the Osingas had some money to invest back into their prime asset, the dairy herd. The herd grew to 230 cows on a leased farm. William was doing most of the milking to keep labor costs in check.

One day around coffee, something of great significance happened. The Osingas were three years into their lease. "We were over 200 cows. But, we decided leasing was not for us. We wanted to put our family stake in the ground," William says. He and Astrid told William's parents they were going to look for a new place for the dairy, perhaps move to another state. His parents made an offer: "Why don't you buy us out?"

"So, we bought them out, bought our independence and moved up to 400 cows," William says.

Overall, the 320-acre farm is highly productive with cool water just 10 feet down. William typically stockpiles more than a year of forage in a large bunker and under tarp on the ground. He produces enough to sell hay. Rye, wheat, oats and coastal Bermuda comprise their "forage salad." He irrigates a field of BMR sorghum. It's all custom-harvested. The operation runs with two employees.

Topped with an American flag, the shed dominates the farm. The Osingas are proud of it and pleased with the result. The herd average increased 12 pounds per cow per day after the cows moved in.

"My dream was having a loafing shed," William says. "It put our goals for efficiency exactly where I wanted them." The loafing shed is not confinement. "At night, they're outside stargazing," he adds. "When it gets hot, they go inside."

A mixed ration is fed down both sides of the center aisle. Fans and sprinklers disbursing 57°F water keep the herd comfortable in summer.

The Osingas use their never-ending supply of sugar sand as bedding, avoiding straw or other materials. "It's the cleanest bedding you can have for a cow. It makes for clean milk and keeps the cows comfortable," he says.

William and Astrid operate by one word: simplicity. "Simple is not overdoing everything," Astrid says. "A good dairy operation? Keep a basic routine, and keep everything clean," William adds. "We want clean milk and ship a really good product. When people drink our milk, we want them to say that's the best milk they ever tasted."

The Osingas focus is on the milk. "We don't raise our replacements; we don't do our own fieldwork. We will not exceed the efficiency of our farm. It's the very basic point of simplicity," William says.

The daily milk average was 48 to 55 pounds of milk when the Osinga's began. Today, with improved nutrition and improved facilities -- the loafing shed -- the dairy is stabilized at an average of 58 to 68 pounds per cow per day.

William is an eighth-generation Osinga dairy farmer, the first-generation American-born dairyman. His folks immigrated to Texas in 1986 from the providence of Friesland, in the Netherlands. "Tradition plays a great role in my life, from putting in hard work, my best, and being true to myself and family," he says.

Astrid also comes from a dairy family. She and her family immigrated from the Netherlands to Sulphur Springs in 1997. William and Astrid have been married since 2013. Astrid holds a bachelor's degree in nursing. She keeps the books, cares for the calves and works closely with William.

"I love the lifestyle," Astrid says. "It's a yo-yo life, but I love to dairy. The farm is where we want it to be right now." The couple is raising two children. Their daughter, Fenna, is 5, and their son, Thais, is 2.

"To have this kind of lifestyle where we can be at home and raise them, and let them know the values in life being around animals, they're getting a great work ethic," Astrid says. "We want them to get a great education, travel as much as they can, and if they come back to the family farm, if we're still here, they'll be mentally prepared for this."

-- Watch the video at https://spotlights.dtnpf.com/… 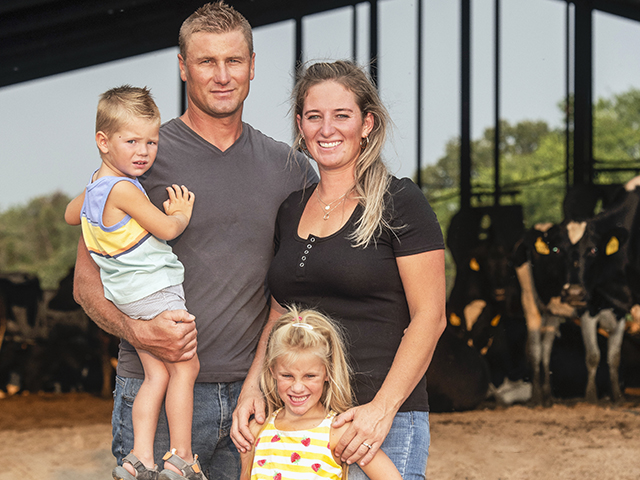