Adam Jones spent the morning talking about his â??farm -- waist-high soybeans, cover crops, low organic soils, vole damage, custom-harvesting â??versus owning your own steel. Now, he is contemplating a future as he drives away from several dozen acres of corn -- an unplanned crop really, corn planted instead of soybeans, the solution to a mistaken custom anhydrous application.

Why are you returning to your family farm? Why are you and your family planning to leave Columbia, Missouri, where you keep a home with your wife, Heather, a middle school science teacher, and where you both are raising three young children, for the family farm, 650 acres two hours away near Maywood, Missouri?

"It's a good question," he says. "I'd say a passion for this farm. There is something about being raised on the farm, and now I have the chance to do it. If I was going out there to chisel-plow everything, that wouldn't appeal to me as much. But, I'll be planting cover crops, working the diversity of the soils. You get to see the fruits of your labor on an annual cycle."

TIME TO GO BACK

After a moment, he adds, "I think the last 18 months has really highlighted the importance of living a more rural lifestyle. This place holds value for me, a value in the generational sacrifices here. The deeper you get into life, the more you respect those kinds of decisions. This is really about impact on this landscape. We like that picture here."

Jones is a University of Missouri graduate with a degree in wildlife biology. He spent 13 years working for the Missouri Department of Conservation, leaving behind a position as wildlife biologist. Jones moved to MFA Incorporated, a Midwest-based regional farm supply and marketing cooperative with 45,000 farmer/owners in Missouri and adjacent states. He is a conservation agronomist, providing support on soil-health practices, integrated weed management and carbon programs. He plans to combine the work of the farm with his position at MFA.

The farm is 360 tillable acres in Lewis County, in far northeast Missouri -- 10 miles west of Quincy, Illinois, and about 35 miles south of the Iowa border. The original Jones tracks were staked out here in the middle 1800s. "That cemetery up there," he says pointing away from a corner of his machine shed, "was taken off a corner of Jones' ground. The church up in Maywood was put out on our land."

Jones Farm has not been farmed by a Jones since 2003. Rather, a neighbor has been farming it since Jones' father, Larry, died. Fall 2021 marks Jones first harvest. He originally left the farm on the advice of his father. "I can remember multiple times my dad saying you can't make a living doing this," he says. Jones did leave. So did a lot of others.

"In northeast Missouri, we did a really good job running my generation off. So, going back? There's a hill to climb. There are growers out here that have been [farming] for 20 or 25 years. They've made those capital investments. I'm trying to make investments from zero, to buy equipment that just won't break down," he says. The plan is to invest in the farm with production from the farm -- not from the couple's nonfarming incomes. Jones is confident that with proper management, it will work. "The farm's got more yield potential in the bank," he says.

THE SOIL AND COVER CROPS

The farm's soil-management challenges mirror the variability of the soils -- silt and sandy loams. River bottom soils line the waterways running to the nearby Mississippi River. Jones' soils are highly variable. One measure of the soil's ability to hold water and nutrients is called cation exchange capacity (CEC). High-sand soils have low CEC values. The measure increases as soils contain increasingly greater levels of clay, silt and organic matter. Jones' soils range from as little as five to almost 25. He has grid-sampled the farm, found areas of low pH and applied lime as he begins to make long-term agronomic investments.

He's currently growing soybeans, a decision he made to control costs and regulate the farm's management commitment. The farm owns a John Deere 4055 tractor, and Jones put together a Kinze 3500 that satisfactorily plants the crop. But, he will pay for a custom harvest. "I would rather invest in building soil than buying iron. There are a lot of guys with big equipment who can cut my 300 acres of soybeans with a couple days' work," he says.

Jones' plans reflect his strong conservation ethic. For one, he is working cover crops into the farm. "I want to play with [cover crops] moving forward, not a real crazy cocktail kind of mix, but I definitely want to integrate cover crops every place I can through rotation," he says. His first cover crop was planted in fall of 2020, 225 acres of cereal rye on 15-inch rows. He planted soybeans into green cover.

"The No. 1 thing we battle with cover crops is moisture retention," Jones says. "This spring was no different. We were superwet. I've seen a lot of mistakes where folks are terminating [cover crops] before planting." The result is a whole bunch of residue and no transpiration. "To get the maximum benefit of that cover crop, I wanted to make sure we weren't keeping the soil too wet. I wanted to leave [the green cover] as long as I possibly could and then terminate it."

Cover crops are his long-term choice. "I didn't just plant it to try to get an extra couple bushel beans this year. Long term, I definitely want to build organic matter," he says. Jones is anxious for the results. "Can we build organic matter, change our yield and most of all the resilience of that crop in lighter soils?"

Jones Farm is shaped by the entire acreage of the farm. It includes a Wetland Reserve Easement, income-generating work with a 25-acre pool, acres of upland native warm-season grasses and a riparian corridor along the Middle Fabius River. It occupies low-lying land that was never highly productive. Jones has planted pollinator habitat -- native grasses and flowering species growing in the "sandbox," a wedge of ground capable of producing little more than natives. He has also taken a chain saw to a wooded area of the farm, trading hackberry for a years-in-the-future cutting of trees with economic value -- white oak being one.

He believes conservation and crop management focused on soil health brings new value to Jones Farm. "I know the benefits and the challenges here, especially integrating cover crops. I want to make it work. If I fail, I'll fail trying."

-- Watch the video at https://spotlights.dtnpf.com/… 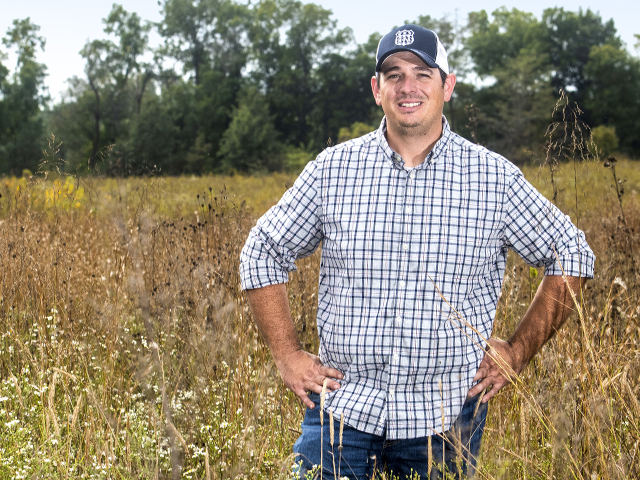