Heavier corn rootworm pressure is possible in fields where volunteer corn was a problem the year before.

Northern and Western corn rootworm activity could increase anywhere corn lodging is an issue, explains Meaghan Anderson, Iowa State University (ISU) Extension field agronomist, based in central Iowa. The 2020 Midwest derecho that flattened or damaged millions of acres of corn is a prime example. Volunteer corn was a problem in 2021 in many derecho-damaged corn fields.

Anderson recommends farmers with volunteer-corn issues not skimp on corn rootworm management in 2022. This includes investing in biotech traits or soil-applied insecticides.

"Farmers would normally be able to opt out of that below-ground trait going into the next season in corn after soybeans," Anderson says. "I think in some of these fields with a lot of volunteer corn, they absolutely should not do that. We recommend a pyramided trait or soil-applied insecticide for corn."

Pyramided rootworm hybrids can be found under brand names such as SmartStax, Qrome, Agrisure Duracade and AcreMax XTreme. For the Handy Bt Trait Table, visit www.texasinsects.org/bt-corn-trait-table.html.

In 2022, there will be one novel rootworm trait, as well, an RNAi trait found in Bayer's SmartStax PRO corn hybrids. It will be in limited availability initially.

Remember that not all Bt traits remain effective because of rootworm resistance. The Handy Bt Trait Table can help note which traits might be compromised. ISU evaluations of various Bt traits and soil-applied insecticides for management of corn rootworm larvae can also be found at www.ent.iastate.edu/dept/faculty/gassmann/rootworm.

Volunteer corn is always a concern, but the Aug. 10, 2020, derecho heightened anxiety about unwanted corn. Winds hitting 140 mph flattened or damaged millions of acres along its 700-mile-plus path, which caused countless ears and kernels to drop on the ground and many fields not to be harvested. Anderson's territory arguably sustained the most damage from the violent storm.

"We saw some pretty hefty populations of volunteer corn left in soybean fields in 2021 in areas affected by the derecho," Anderson says. "Volunteer corn may not have devastated yields in many fields, but it's a host for corn rootworms.

"When I was out in fields in August looking at volunteer corn, that's where all the corn rootworm beetles were, and that's where they are laying eggs," she continues. "They (rootworm larvae) will be there waiting for corn next year."

Among the many reasons why farmers often rotate fields between corn and soybeans annually is to lesson corn rootworm pressure by planting a nonhost crop. If enough volunteer corn exists in a soybean field, Anderson insists it can be a "bridge" to higher rootworm populations in fields planted back to corn.

When corn rootworm larvae hatch in the spring, they begin feeding on corn roots. Adult rootworm beetles feed aboveground on corn silks and can interfere with pollination. The insects have earned the nickname "billion-dollar bug" because of their yield- and revenue-robbing reputation.

WinField United agronomist Andy Dickes agrees that one of the best ways to control rootworms is crop rotation.

He says soybeans, alfalfa and even forage sorghum are all good choices as nonhost crops.

"Not planting corn after corn is the key to control," he concludes.

Storms are the gift that keep on threatening. Parts of the Upper Midwest were hit by multiple severe thunderstorms in late-August 2021, packing strong straight-line winds that caused extensive corn lodging.

Anderson says farmers with lodged corn in 2021 could deal with volunteer corn problems in 2022. As a result, heavier rootworm pressure could occur in 2023 in areas affected by the storms.

It takes a focused effort to keep volunteer corn from acting as a host for unwanted pests. Read DTN's story about volunteer corn management at
https://www.dtnpf.com/… 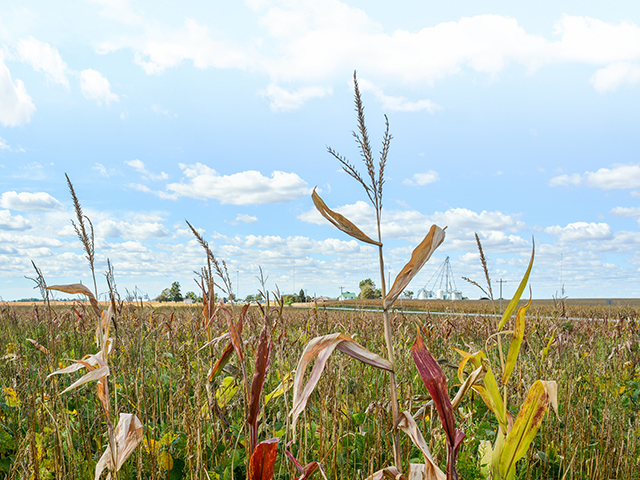