Dennis Pearson is serious about hay, with good reason. "Thirty percent of our income comes from hay sales," the Warrenton, Virginia, producer says. Equally as important, if not more so, it helps fuel his 80-cow purebred Angus herd. So, he tests the rolls he feeds, as well as the small square bales he sells to customers for horses.

Pearson's county agent, Tim Mize, is all for that kind of detailed approach to hay management. "All hay is not the same. It is like EPDs [expected progeny differences]. You can't tell by looking at a bull what his EPDs are. And, if you just look at hay, it won't tell you where it is in quality and how you need to feed it."

Texas A&M Extension beef specialist Jason Banta agrees. "If you test, you know which cutting or lot to feed to which cattle."

For example, if cows are dry, weighing around 1,300 pounds, they can get by with 55% total digestible nutrients (TDN) and a little over 8.5% crude protein (CP). If they calved and are hitting peak lactation, that goes up to 61% TDN and 12.5% CP. Feed them all the same hay, and somebody is either getting short-changed or overfed.

At Pearson's Soldiers' Hill Angus Farm, the orchard grass, fescue and bluegrass hay he grows run 58 to 62% TDN and 8 to 14% CP. The highest-quality bales go to growing cattle, including weaned calves, replacement heifers and young bulls. He supplements lightly with grain, at less than 1% body weight per head per day. Mid-quality hay goes to lactating, fall-calving cows so they'll be in good condition for rebreeding, which includes both artificial insemination (AI) and embryo transfer (ET). Lesser-quality hay goes to the spring calving herd, which is dry during the winter.

County agent Mize handles Pearson's forage tests, taking the hay samples and sending them to a commercial lab. Typically, he gets a near-infrared (NIR) reflectance spectroscopy analysis done rather than the more expensive wet chemistry analysis, which takes longer.

The basic analysis, which currently costs $18.50 a sample, gives dry matter, CP, adjusted crude protein, neutral detergent fiber (NDF) digestibility and mineral content. Estimated net energy for maintenance (NEM) and net energy for gain (NEG) are also included and useful for growing animals such as stocker steers. Mize adds TDN is also in the report but is an estimate.

For hay buyers, Texas A&M's Banta says it's important to ask for nutritional information, and if it's not available, be willing to pay to have the testing done. "Most hay dealers are willing if you tell them you'll pay for it and share the results with them whether you buy it or not," he says.

Whether you're buying hay or growing your own, bale weight is another big variable that is best not left to guesswork. Round bales are usually described by width times diameter. Density also plays into the equation and can make a big difference in the actual cost of hay and/or how often you have to feed it.

On Pearson's operation, it is moisture that makes the difference. His 4- x 5-foot dry bales usually weigh around 800 pounds a roll, while his wet wrapped hay (baleage) averages 1,600 pounds. Because of the variation in weight, even in dry hay, Banta recommends buying per ton rather than per roll. If an 1,100-pound roll and an 880-pound roll are both priced at $45 a roll, you'll be paying $81.82 per ton for the heavier roll and $102.27 per ton for the lighter roll.

Whether his hay is for cash-flow or cow feed, Pearson says he'll continue to keep tabs on key measurements.

"We put a lot of effort and time into our hay so we can sell it, but we want to provide our cattle with the best nutrition we can. It helps with conception rates, milk, gain and performance," he says.

Mize agrees. "Cattle producers really need to know the quality of their hay. If it is high-quality hay, they might be overfeeding and overspending. If it is poor quality, you could be underfeeding and losing production and pregnancy rates. All hay is not the same."

Testing hay is a chore that doesn't take a lot of savvy or bucks. Consider these four basic steps.

1. Get a hay probe. Many county Extension offices have one you can borrow.

2. Take a sample from the center of the bale. Texas A&M Extension beef specialist Jason Banta recommends going in from the rounded side rather than the top.

4. Mix the cores in a ziplock bag, label it and give it to the person sending it in for you, or send it yourself.

Banta says he strongly encourages producers to visit with their nutritionist or whomever helps them with their rations before they send in a hay test. Find out where they recommend sending it and what tests are most appropriate.

"Another consideration is checking for heat-damaged protein, which results from heating if hay is put up a little wet. It shows up in acid detergent insoluble crude protein (ADICP), and unfortunately, many labs don't test for this. If there is heat damage, the lab should provide an adjusted crude protein value." 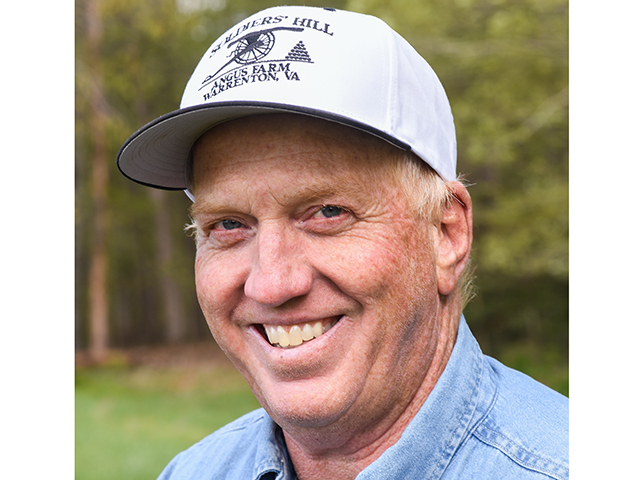