Frustration about weed control may at times seem like pouring money for herbicides into a black hole. But, University of Illinois scientists are working to unlock some of the mysteries in a weed's black box that causes some species to withstand chemical control. Once solved, it will give farmers better, more effective tools for their weed-management programs.

Weed resistance to herbicides evolves in one of two ways.

1.) Target-site resistance. A tiny mutation in the plant's genetic code means the chemical no longer fits in the protein it's designed to attack.

2.) Nontarget-site resistance. The plant deploys a whole slew of enzymes that detoxify the chemical before it can cause harm.

Target-site resistance is easy for scientists. They know what the target protein is, which means they can look directly at the genetic code to figure out the mutation responsible.

A University of Illinois study is the first to open that box in a new way, identifying gene regions responsible for nontarget-site herbicide resistance in waterhemp.

Scientists used a genetic-mapping approach with the reference genome for waterhemp, a species that can cause yield losses upwards of 70% in corn and is resistant to seven herbicide modes of action, explains Pat Tranel, professor and associate head in the department of crop sciences and co-author of the study.

"We were able to narrow it down to two regions of the genome, or about 60 genes," he says. Being able to pinpoint the genes for nontarget-site resistance could enable tools for early detection and herbicide management."

"We eventually want to develop an assay farmers can use to tell if the waterhemp in their field is resistant to a given chemical, either to confirm why a previous application did not work or, before they spray, to see if they're going to waste money," says Brent Murphy, doctoral researcher and lead author on the study.

"Now we know the genes responsible are somewhere in these two small regions of the genome," Murphy continues. "So, we've come to an intermediary step to eventually developing an assay that growers can use to determine whether or not they should be spraying a certain chemistry."

The researchers specifically looked for genes that allow waterhemp to evade HPPD-inhibiting herbicides such as tembotrione (Laudis, for example), a chemical commonly applied in seed corn and other production systems.

To find the genomic regions responsible, scientists mated waterhemp plants that showed resistance or sensitivity to HPPD inhibitors. Then they exposed the grandchildren of those parent plants to HPPD-inhibiting herbicides to see how they fared. Because the complete waterhemp genome is now available, they were able to look for commonalities among plants that survived the HPPD-inhibitor application.

"You basically ask the question, for the resistant plants, 'What part of their genome do they share in common?'" Tranel points out. "And, that gets you to 'What part of the genome is controlling the trait of interest?' Using this approach, known as genetic mapping, we identified two regions of the genome that seemed to be associated with resistance."

Murphy was able to determine which plants had each of the two regions and which had both. This allowed him to rank the importance of the gene regions.

"A lot of times, we know a trait is controlled by two genes. But, does that mean both genes are equally important, or one gene is 90% responsible, and the other gene is 10%? That's part of what we're looking at in the genetic architecture of a trait: the number of genes, where they are and the relative importance of these different genes," Tranel says.

The researchers still don't know which of the 60-some genes are essential to HPPD-inhibitor resistance. They plan follow-up studies to narrow the search even further.

However, they know none of the genes encode P450 enzymes. These have been implicated in multiple studies as key players in nontarget-site resistance.

"While a P450 enzyme might still be involved, our mapping study indicates the change causing resistance is in a gene regulating the P450, rather than in the P450 gene itself," Tranel explains.

HPPD-inhibitors are commonly used in seed corn and other maize production systems. Interestingly, they hadn't been used in the field where the researchers collected the waterhemp for the study.

"There wasn't a previous field-use history of this chemistry. So, it was really interesting to see that our population was resistant to it. How did this develop? Most of the time, you expect resistance to develop as a result of some form of selection pressure. But, here we don't have an obvious one," Murphy explains.

"Why do we have this plant that's resistant to multiple herbicides? Are there some genomic changes in common to facilitate that resistance? It's really important to understand this as we try to give farmers advice about what can they do to mitigate nontarget-site resistance, because it's still a bit of a black box," he explains.

He expects that as more weed genomes become available, genetic mapping will become a mainstay for investigating nontarget-site resistance.

-- Lauren Quinn is a media and communications specialist at the University of Illinois. 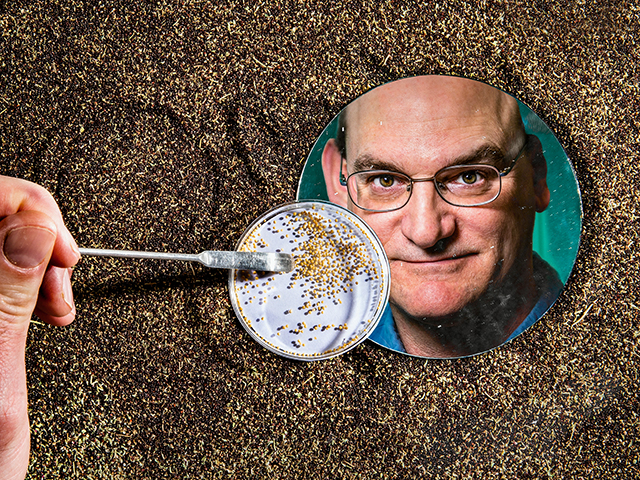