Nearly 6 million people were treated to views of lush, green corn and soybean fields stretching to the horizon and a spectacular sunset with an orange-red tint during the recent "Field of Dreams" baseball game, near Dyersville, Iowa.

It's an impression of agriculture and the Midwest that farmers and ag leaders hope will have a long-lasting positive affect on the industry and the region. It was made possible by Major League Baseball's (MLB) decision to honor the baseball movie "Field of Dreams" by hosting its first game on the farm and in the state that's synonymous with the film.

In a home run fest, the Chicago White Sox beat the New York Yankees 9 to 8 in dramatic fashion. White Sox shortstop Tim Anderson hit a two-run, walk-off dinger. The real winner, however, may have been agriculture.

"It was a fantastic opportunity to put corn and agriculture on a national stage," says Iowa farmer Chris Edgington, who watched the game from behind home plate. "The positives of this will last a long time."

Edgington, who farms near St. Ansgar, in the north-central part of the state, is president of the National Corn Growers Association (NCGA). It partnered with MLB to host the game, according to NCGA's website, which was made possible through the "generous" support of the Iowa Corn Promotion Board and Illinois Corn Marketing Board.

The financial support of the event from the commodity groups is worth every penny, Edgington believes.

Nielsen ratings indicate the largest MLB regular-season TV audience in 16 years, about 5.9 million viewers, watched the game. About 8,000 fans from all across the nation packed the stadium MLB erected in a corn field next to the movie set, which includes the original baseball diamond and white farmhouse.

"Field of Dreams" star Kevin Costner "magically" emerged from the towering corn beyond right field, much like "Shoeless" Joe Jackson and other ghost players did in the movie. MLB players followed suit. In a pregame speech, Costner eloquently said the event, location and corn were "perfect."

Before and during the game, Edgington says MLB employees and out-of-state fans told him they didn't know Iowa and the Midwest were so beautiful. They also asked Edgington and other farmers how corn rows are planted so straight and how plants are spaced almost perfectly apart, along with other production questions. Edgington explained that technologies, such as GPS and auto-steer, play a big role in modern agriculture.

Facts about Iowa agriculture being the top corn and pig producer in the nation were shown during the telecast. FOX announcers often raved about the beauty of the region and corn surrounding the field.

"We (NCGA and commodity groups) work to educate consumers and policymakers on our products ... and production," Edgington says, noting non-farmers are often the ones passing regulations pertaining to farming. "Agriculture looked good."

Iowa Soybean Association CEO Kirk Leeds watched the game from the left field bleachers. He also chatted with fans from New York City and across the country about agriculture.

"I talked about how important agriculture is to our economy, the number of farmers in Iowa and how Iowa helps feed the world by producing the most corn, pork and eggs in the nation, and the second-most soybeans," Leeds says. "I wouldn't say they were oblivious, but pretty close.

"It was a great way for people to get back in touch with the land, agriculture and rural America," he adds. 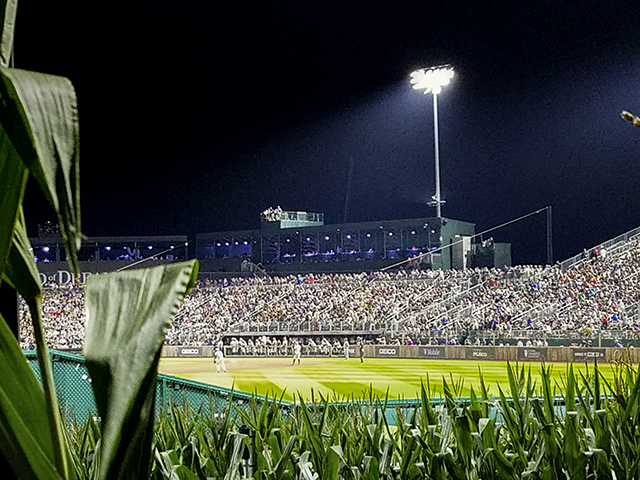