Kyle Benschoter closely checks several forage samples collected from fields of the 2,200 acres of hay harvested on the family's northwest Ohio farm, near Cygnet. Plastic 1-gallon bags contain chopped green alfalfa or alfalfa-orchardgrass mix they've cut, tested, baled and delivered to customers as close as five miles down the road and as far away as North Carolina and New York.

Each bag is marked with the field of origin and cutting. Customers -- and prospective customers -- receive test results verifying the Relative Feed Quality (RFQ) of the product whether it's dry hay or still-damp product wrapped in plastic, known as baleage.

"We guarantee that the product sample we send to you -- that we represent to you -- is the same as the truckload of hay we'll show up with to your farm," Kyle says. "If you don't like it, and it doesn't fit our description, we'll take it back. That's true whether we deliver it down the road or whether we've trucked it to Pennsylvania."

Certainly, the Benschoters don't want to turn around and take a load back. That's why they pay attention to their product, their tests and the particular needs of customers.

"You have to know how a customer is feeding the hay or straw," Tyler explains. "Even if you are selling to two different dairies, their use of your product may fill different needs."

"Customers want to see the test numbers, but they still have to have a large amount of trust that what the tests represent is the hay they will receive," Kyle adds.

The trust is earned over time.

That's the case with Tony Greene, who owns Triple Creek Livestock and Hay, in Hendersonville, North Carolina -- 550 miles from Cygnet. "Their quality is very, very good," Greene says of the semiloads he buys from Benschoter Hay and Straw. He sells the hay by the bale to numerous horse stables and horse owners in the mountainous western part of the state. "I either get straight alfalfa bales or alfalfa-orchardgrass mixed bales. I've been buying from them about eight years." Greene purchases a whopping 25 semiloads from the Benschoters annually, about a truckload every two weeks.

"Naturally, the forage tests tell you a lot about the hay, and I pass that information along to my customers," he continues. "But, I also go off what the Benschoters tell me, as well."

It is possible to grow alfalfa in the South -- just not as easy in the heat and humidity. Greene needs a lot of it, and the Benschoters provide the quantity as well as quality.

The commitment to quality starts at the top. All three Benschoter brothers, Tyler, Kyle and Nathan, refer to their father, John Benschoter, as "boss man," but the elder Benschoter deflects some of that attention.

"I like to say I drive the truck, and I let the boys do what they are going to do and figure it out," says John, who does spend a lot of time on the road making deliveries. "I don't micromanage much."

John's 30-plus-year reputation with some customers is such that there are several buyers, Kyle says, who would be disappointed if John wasn't the guy pulling up to their farm in the truck with hay or straw.

In any given year, more than 50% of the hay the Benschoters bale is sold prior to harvest. And, it is likely 95% of the hay from their operation will be delivered on one of a handful of Benschoter-owned trucks. That means the family works with trucking logistic companies to ensure their trucks are hauling lumber, utility trailers or decorative rock on the return trip.

"That's the goal, to minimize empty trucks on the road," Kyle says. In that regard, trucking provides additional income.

John Benschoter started farming while in high school with the help of a farmer-neighbor. They grew strawberries and tomatoes together briefly, and when 60 acres were coming out of the neighbor's federal set-aside program in 1983, they seeded it to alfalfa. He's never looked back.

"It clicked with me that there was considerable demand and the potential to sell a lot of hay if you had a good product," John says. He purchased a small, used baler and rake, and continued to grow, eventually working in tandem with his father, Kay, who continues to help to this day.

Both hay and straw are sold in 3 x 4 x 8 rectangle bales weighing 1,400 to 1,500 pounds. Hay is priced per ton based on its quality. Each field is lab-tested so the Benschoters know the forage's nutrition value.

Over the years, the demand for wheat straw has increased, along with its use for erosion control on highway and landscaping projects. However, there seems to be less wheat being grown in northwest Ohio, and the competition to harvest the straw is stiff. The Benschoters are grateful to have longstanding relationships with local wheat growers, some of which go back 20-plus years.

While word of mouth has served the family well getting new business, Kyle does advertise with specific publications or websites -- quite often those associated with horses. Additionally, he can and has targeted their Facebook posts (paying a fee) to appear to people online who have shown interest in a variety of topics, including bridles or stables or even farm managers.

In a good year, the Benschoters will take four cuttings of hay -- this year, the first was on May 13 and the second on June 20. Usually, there is about a month between cuttings. Their alfalfa fields will yield roughly 5 tons per acre annually. They pay attention to fertilization levels, and the beginning and end of the season are prime time for more nutrients, such as potash, phosphorus/nitrogen (MAP) and sulfur.

"The boost of energy you give the crop after the first cutting helps production for the second and third cuttings," Kyle explains. "We generally wait until the end of the season, after the fourth cutting, to apply another round of fertilizer. We utilize grid-sampling on all our hay acres so each product can be applied at variable rates."

The Benschoters apply fertilizer in the fall so it has more opportunity to incorporate with the soil through fall and winter, and boosts the ability of the crop to survive winter.

"A farmer could apply in the spring," Kyle says, "but there's a chance the weather may not cooperate, and you might not be able to get fertilizer down before first cutting." In general, the Benschoters' crop rotation is hay, soybeans, wheat then back to hay.

On the farm, John, Tyler and Kyle split duties communicating with particular customers. Kyle, an accountant by trade, handles most of the office duties, while Tyler, a trained mechanic, is in charge of the shop. The youngest, Nathan, is a generalist able to pinch-hit any duty or piece of machinery on the farm.

Given the number of young family members involved -- and a father still in his prime -- the Benschoters will be looking to grow. They've built 80,400 square feet of hay storage, and their primary equipment, three windrowers and three balers, are relatively new.

John has long maintained having good people and good equipment are key. The "good people" includes more than family.

"We rely heavily on our employees that work very hard in the fields and on the road making deliveries," Kyle says. "The same is true of local growers and vendors that keep this business running smoothly."

Adds John, "I certainly didn't see 10 years ago the amount of hay we'd be working today. It comes down to having enough of the right people and equipment, and all three sons have brought different skills to the table. But, I do want them to be brothers first and partners second -- that can be hard to do."

Twenty years ago, the University of Wisconsin and the University of Florida developed the Relative Forage Quality (RFQ) scale that has become the gold standard for comparing the feed value of various grasses and legumes. RFQ measures total digestible nutrients (TDN), a measure of digestible energy and a calculated estimate of dry matter intake (DMI).

An RFQ score above 140 means a particular hay is considered "premium." A score in the upper 200s is outstanding, while a score of 300 or better is possible yet unusual. Recent RFQ scores for the Benschoters ranged from 95 to 295.

"If you get 180 to 200, that's really good," Kyle Benschoter says. "The proteins matter, too. It depends on the market you are selling into." The RFQ for alfalfa is so high that feeding it alone isn't necessary or desirable -- it is generally used as supplement. Horses ridden occasionally don't need as much alfalfa/energy as dairy cows producing milk. The 2021 RFQ range for the Benschoters is 63 to 245.

A planting of alfalfa generally has a five-year productive life. After that, yields decline. Alfalfa fields can't be immediately planted back to the same crop. Alfalfa produces an autotoxin, a chemical that suppresses its own seedlings from developing nearby an alfalfa plant. The toxin creates a zone of about 3 feet that prevents a new seedling from growing. It takes about a year for the zone to dissipate. 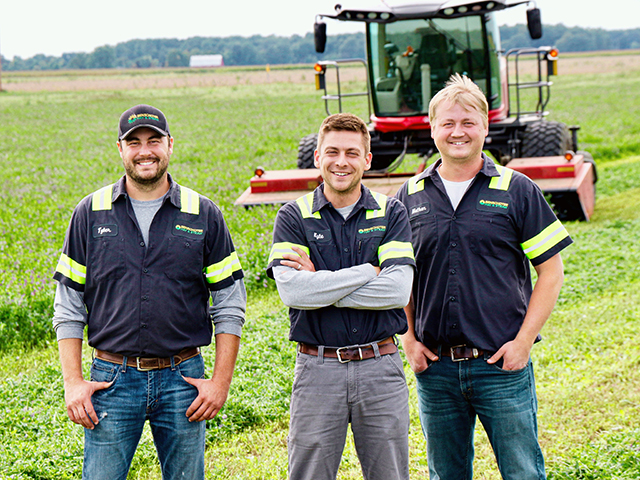