The '80s rock band The Fixx likely did not have soybeans on their mind when they belted the hit song "One Thing Leads to Another." Still, the tune seems appropriate when considering news from The SCN Coalition that soybean fields infested with soybean cyst nematode (SCN) are at increased risk of sudden death syndrome (SDS).

By the time SDS rears its head in the fall with those characteristic leaves with yellow blotches between the leaf veins that eventually turn brown at the center, soybean roots have been infected for months. SDS begins in wet springs when the pathogen, which is present in the soil, infects soybean roots. Rain during the reproductive growth stages allows the pathogen's toxins to move from the roots to the leaves.

However, it's possible that the fungal pathogen that causes SDS (Fusarium virguliforme) and SCN are working together belowground in a one-two punch that doles out yield losses. In a 2019 Michigan State University study, researchers concluded that SCN has significant association with SDS development.

SCN reproduction thrives in dry soils, while SDS prefers cooler, wetter conditions. However, Martin Chilvers, a Michigan State University plant pathologist, says soybean farmers need to understand that no matter the weather, these two pathogens appear to compete for nutrients within the root, either directly
or indirectly.

"The data from the 2019 study reveals the added pressure of SCN can increase the risk of developing severe SDS in a density-dependent manner. In other words, SCN can exacerbate SDS," Chilvers said in The SCN Coalition release.

Severe SDS can also develop in the absence of SCN, but soybean producers who detect SDS during the growing season or have fields that have shown SDS in the past are encouraged to add SCN sampling to their list of fall management chores.

"I want to stress that SDS worsens as SCN population densities rise," Chilvers says. "We want soybean growers to understand this relationship, and I hope this gives them another reason to test soil for SCN."

Chilvers is hopeful that a soil test assay will also be available to test for Fusarium virguliforme in the future. "The study that we conducted was a proof of principle, which demonstrated that our assay could detect hot spots of SDS within a field. We are now collaborating with others to expand the application of our assay to many soil types and locations to see if the assay can be routinely used as an SDS risk prediction tool, which would aid as a decision tool for the selection of SDS-resistant varieties and SDS-specific seed treatments," Chilvers explains.

Beyond checking population densities, fall soil testing for SCN can indicate whether varietal resistance is holding. In areas where the most common source of SCN resistance, known as PI 88788, has been used for more than 30 years, SCN populations are reproducing and having a negative impact on soybean yields. Research from 15 years of variety trial experiments in farmers' fields in Iowa showed as SCN reproduction increases on PI 88788, yields decrease by as much as 14 bushels per acre -- equivalent to a 23% yield reduction.

"I urge growers to work with their agronomist or crop consultant to fine-tune their SCN management strategies," he says. In addition to testing soil for SCN, he encourages soybean growers to rotate varieties with different sources of SCN resistance, rotate to nonhost crops such as corn and wheat at least every other year, and consider using a nematode-protectant seed treatment.

That consultation could be more important this year than ever if conditions were hot and dry this season.

"We have data verifying that SCN is worse in hot, dry years," he says. "The nematode is reproducing much quicker, raising population densities.

"Many soybean growers have faced back-to-back years of hot and dry conditions," Tylka adds. "Once again, I would expect SCN soil samples collected this fall to reveal higher SCN population densities. In a traditional corn-soybean rotation, accelerated nematode reproduction would be a consideration the next time you plant soybeans." 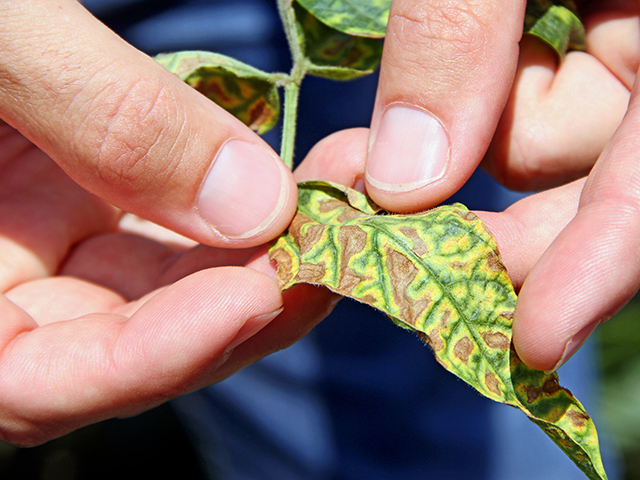