Whether it's called "management intensive grazing" (Barthe's preferred term), intensive rotational grazing or even mob grazing, this Norwood, Louisiana, grazier says the idea is to put a lot of animals in a small space for a short time and then move them. He gave management intensive grazing (MIG) a trial run at his small place in Mississippi before bringing it to the family farm in Louisiana in 1989. In that trial, he bought 250- to 300-pound calves and stockered them on three 5-acre plots of ryegrass at approximately 800 pounds per acre. "They gained like crazy," he recalls. As for his neighbors, he says, "They thought I was one crazy Cajun."

The fundamentals of Barthe's program start with understanding the need to rest forages. "The rest period is more important than the grazing, and it changes across the year. It depends on water, temperature and how many animals are on it. That's a difficult basketball to dribble across a dirt floor," he laughs.

On 250 acres of pasture he manages with his brother, Sammy, that rest period can go from 30 days in the winter down to 16 or 17 days in the summer.

"Quality of grass depends on maturity, and that depends on temperature, water and age. When bahiagrass reaches seed head stage, it's done," he explains. "MIG is nothing more than a high-quality haying operation. If you manage for hay quality, you cut it every 28 to 35 days, then rest it for that long."

2. TAKE HALF, LEAVE HALF

Barthe says they used to graze down to the deck but learned it handicaps grass. "That forage is your solar panel," he says. "Now, we leave 6 to 8 inches."

University of Georgia animal scientist Jennifer Johnson Tucker says the rule they use is take half and leave half. Carbohydrate reserves are in the roots, and they spark regrowth. Deplete them, and regrowth takes longer. She adds this is species-specific.

"The summer annuals like sorghum-sudangrass and native warm-season grasses like eastern gamagrass should be grazed higher. You can go in when they're 18 to 24 inches tall, but you need to come off when they're down to about 10 inches. Bermudagrass and bahiagrass are more tolerant of shorter grazing and can withstand pressure down to 3 inches."

"We like to have 25,000 to 30,000 pounds of animals per day on a paddock. I don't believe grass really responds with less," Barthe says. His average paddock size is 90 feet wide and up to 300 feet long, depending on the amount of forage available and how many animals are in a group. Cattle are normally only in a paddock one day before they move.

At one point, Barthe didn't use electric fencing, but a few bulls changed his opinion. "In 1989, we had Brangus bulls and longhorn bulls, and they were out more than they were in," he recalls. He took a tip from grazing gurus like Allan Savory, R. L. Dalrymple and the late Allan Nation, and gave electric fencing a try.

"We've been using it ever since. We won't put a piece of barbed wire on this place. If we have a cow that doesn't respect it, she goes on the trailer."

They carry four herds totaling around 85 Angus-Brangus cows and replacement heifers. Perimeter fences are six to eight wires; permanent interior fences are three wires. They use temporary posts to keep around 150 paddocks in place.

Rather than trying to get water to each paddock, they use lanes to get cattle to water. Two herds water out of ponds, the rest drink from troughs using piped-in water. "That's the most expensive part of the system," Barthe notes. They use 2-inch pipes for trunk lines and storage, and 1-inch pipes for the branches.

Cattle take care of fertility on most pastures, but the exception to a "no commercial fertilizer and plowing rule" is a 20-acre field of ryegrass for replacement heifers. Heifers graze rye by Dec. 1. Cows often won't get into green grass until sometime in January. Starting heifers earlier helps with body condition and conception rates. On paddocks where they aren't in as much of a hurry, they broadcast ryegrass seed. A chain harrow pulled in one direction then 90 degrees back across is enough to incorporate it.

During the gap between when the summer forages will go dormant and winter grazing becomes available, Barthe and Sammy hand-feed purchased supplements at 15 to 20 tons a year, and around 300 rolls of hay.

"We rarely spray a weed," Barthe says. "As soil begins to work, there is a symbiotic relationship between soil organisms. They make good grasses stronger."

As for insects, Barthe puts a lot of store in dung beetles. They feed on fly larvae in manure, keep fly populations down and eliminate a need for insecticides.

They do a lot of summer stockpiling here -- mostly bahiagrass, bermudagrass, smutgrass, broomsedge and weeds. They start stockpiling around the first of July and don't use it until first frost. When feeding stockpiled forage, they portion out a 300-foot-wide paddock and give cows around 6 feet a day with no back fence.

Pelvic measurements are done on all potential replacement heifers. The minimum they keep is 130 square centimeters, and Barthe says they've kicked out a 230-square-centimeter heifer. "You can't grow enough grass to fill up a cow over 1,200 pounds. Heat wise, they can't take it either." 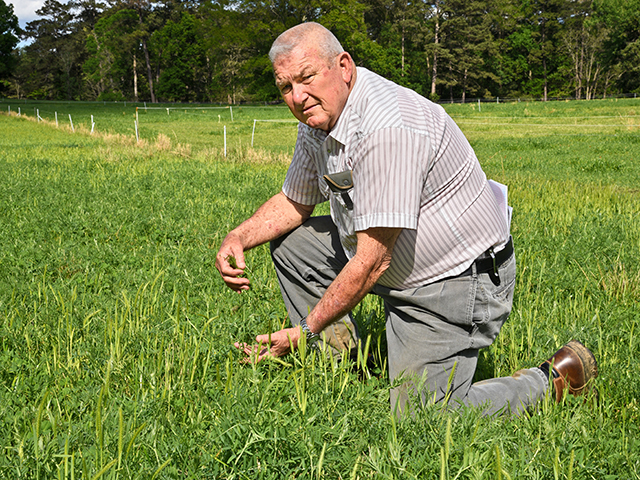