For nearly 50 years, Ed Koger has practiced land-management principles he learned from his grandparents on his family's historic ranch in south-central Kansas. During that time, he has developed an "almost genetic," deeply instilled sense of responsibility to protect the prairie.

His work is obvious, even on a dry, late-August drive through the Hashknife Ranch, eight by 10 miles of unbroken native tallgrass pastures. Koger's Ram pickup travels familiar trails, flushing quail ahead of it. As the trail leads to high ground, one can gaze the landscape in nearly any direction and see pastures of varying shades of green, dotted with Koger's 1,100 high-quality Angus cows, and up to 1,500 yearlings.

Not as obvious is a diverse population of wildlife, a resource with an important role in the ranch's economics. "When I first moved here from the Flint Hills in 1974, 30% or more of this ranch was covered with Eastern red cedar and other brush," Koger explains.

As a member of a Kansas ranching family with roots in the Flint Hills region since the 1850s, Koger was no stranger to burning pastures. "My grandfather taught me fire was the best tool we have for the natural regeneration of the prairie and various species that live there," he explains. The prairie ecosystem depends upon the climate, grazing and fire to remain vital and sustain life. "You cannot eliminate any of the three and preserve the prairie," he says. The climate provides sunlight and rain. Grazing has always been a part of the prairie, as various ruminants -- bison, elk, deer, antelope and, more recently, cattle -- depended upon the grasses, and through their migration and foot traffic, they recycled nutrients. "Fire is a disrupter that complements the grazing by removing invasive woody species, speeds nutrient recycling and provides for lush new growth," Koger adds.

He prefers the "patch burn" method that involves only specific parts of a given pasture within the ranch on a rotational basis, although he still tries to get fire on every acre at least every five years, if possible. "Our biggest pastures are about 4,000 acres, and the smallest is 1,200 acres, which we split into a pair of 600s and rotate burns there," he explains. "We usually start burning in April and continue through early summer. I want some green growth started before we burn."

By burning smaller sections of pastures, Koger says the "rested" areas develop a higher level of plant diversity and populations. Grasses two to three years after a burn grow thicker and provide more cover for wildlife and winter forage for cattle. "When you burn whole pastures, you can do some harm to wildlife," he says. "When we did that, we'd find a number of turtle shells in the aftermath of a fire. Now that we're burning smaller areas at a time, we seldom see that kind of thing.

"When you leave an adjacent pasture to rest, quail, prairie chickens and turkey have access to cover from predators where you stopped burning. Like the cattle, they also prefer to feed on nearby burned areas as the grasses begin their flush of growth. With that growth comes populations of insects, feed for upland birds."

Koger says he's learning more about patch-burn tactics and how to use smaller fires in stocking his pastures. "Through the years, we noticed after a fire, leadplant, a prairie legume, flourished. We also noticed yearling cattle wouldn't touch it, but mature cows would eat it readily," he explains. "So, now we coordinate fire plans and stocking decisions to ensure the leadplant gets several years of rest between grazing and burning."

Koger's prescribed burning has been a management mainstay on the Hashknife since 1977. The results include many things besides improved cattle performance. "We have seen better breedback percentages and better weaning weights as we've progressed. And, a pen of 300 of our cattle in the feedlot will grade 100% Prime or Choice consistently, so we're doing something right," he says. "One telltale sign the cattle prefer burned pastures is we'll typically find them on burned acres 80% of the time."

Not so obvious are the lack of windmills and watering tanks on the Hashknife Ranch.

"This ranch used to have a lot of windmills," Koger explains. "We don't need them now that we got rid of the cedars. We gradually noticed more running water on the ranch as the springs reappeared with the restored natural water table. The ranch has lots of draws now with stands of cattails and wet spots that didn't exist before we started burning."

Diversity in plants and bird populations has benefited from Koger's rotational patch-burning practices. In a recent Kansas State University inventory of the ranch in conjunction with the Lesser Prairie-Chicken Initiative, the Hashknife Ranch is home to 125 bird species, 58 grass species and nearly 150 species of forbs, which also account for 30 to 40% of the cattle's diet.

Quail numbers, too, benefit from Koger's management. Overall numbers on the ranch have remained stable, with a 50-50 mix of carryover versus "new hatch" birds during the past 10 years. "I think the habitat of older pastures next to burned pastures is responsible for our consistent quail numbers," he says. "I clean a lot of quail for customers, and even well into the cold-weather part of quail season, we see they are still eating lots of insects."

The Hashknife Ranch has been hosting deer, quail and wild turkey hunters for 19 years. Hundreds of Rio Grande turkeys thrive on the patch-burn pastures, and Koger estimates the ranch is home to more than 300 Lesser Prairie-Chickens -- up from a few birds in the mid-1980s. "We've found land management that's good for our cattle business is also very good for wildlife. We have cultivated an enviable presence of well-nourished and developed white-tail deer."

Through the years, several of Koger's neighbors have begun managing their ranches with fire across Kiowa, Comanche and Barber counties southwest of Pratt, Kansas. Last year, the area saw 28,000 acres of prairie treated with controlled burns. The widespread use of controlled burns also has slowed the spread of wildfires.

Asked about local public perception of frequent controlled burns, Koger took out his smartphone and played a recording of a local emergency dispatcher calling to alert his crews of an impending wind change in the area of a burn in progress. "That's good PR anyway you look at it," he smiles. "The people who live in this area for the most part respect the prairies and know we have to burn to take care of them." 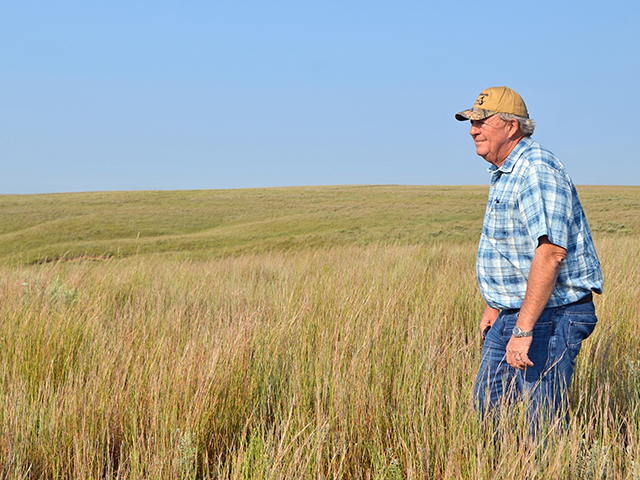