As we go into late spring, many of the top crop-growing regions of the world have favorable weather conditions.

Europe had a wet fall and winter, followed by good rain in early spring to boost the yield potential of winter grains and soil moisture for summer crops.

Russia saw a turnaround in moisture patterns from a concerning dry stretch at the end of 2020 to frequent snow and rain during the first quarter of 2021. It has improved soil moisture for both the final stages of winter wheat, as well as summer crops.

Australia has had periods of heavy rain in eastern crop areas, causing flooding and damage to the southern hemisphere summer crops but also boosting moisture for the next winter wheat crop.

In the U.S., record early-spring precipitation in the Central and Southern Plains, and heavy amounts in the Midwest offer improved moisture for row-crop planting and winter wheat development.

Not everyone is sharing in this moisture trend. In North America, drought has been a primary feature from the U.S. Northern Plains north into the Canadian Prairies and west to the Pacific Coast.

In North Dakota, the 2020-21 winter season was the third driest on record. (Weather recordkeeping uses December, January and February for the winter season.) Also, the six-month period of September 2020 through February 2021 was the state's driest on record going back 127 years to 1894. This sets up the possibility for crop-moisture concern through the 2021 growing season, because soil-moisture recharge is hard to accomplish during the warm-season months.

Farther west, drought is at extreme or exceptional levels according to the U.S. Drought Monitor and is likely to be a feature through the rest of the year.

Crop acreage will be affected. For example, even before planting season, prospects for reduced acreage of extralong staple (ELS) cotton from 10% to more than 25% were noted in California and Texas because of concerns about water availability. Besides crop-moisture issues, moisture for pasture and hay, along with livestock water could force ranchers to sell cattle because of a lack of forage and available water. We already saw that occurrence a few years ago in the Southern Rockies-Intermountain West cattle business.

One other large area of dryness potential is in central Brazil, as its second-crop corn (safrinha) season winds down. Central Brazil has two seasons: wet and dry. The second-crop corn needs an extended rainy season this year to reach full yield potential. Production could be notably crimped if the dry season does not hold off. 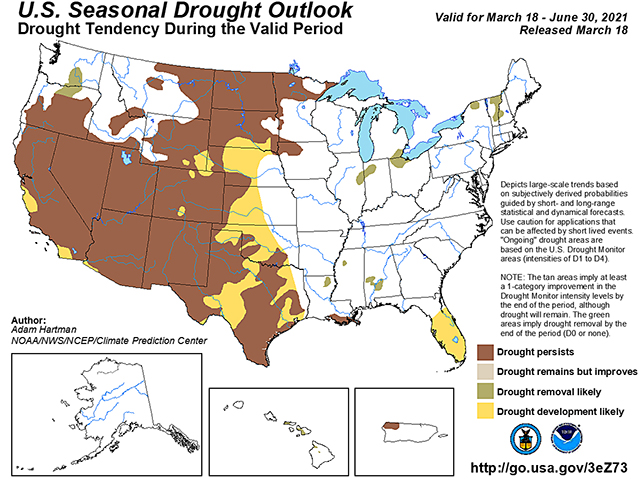