Brought to You by Nutrien Smart Nutrition MAP+MST

To unlock higher yields and spur protein levels in soybeans and wheat, pay attention to your nitrogen:sulfur ratios.

Deciding when and how much sulfur to supplement can be tricky, since soil testing for predicting sulfur response is not always reliable, and in-season tissue testing is better utilized as a diagnostic tool.

One option for determining sulfur application rate is utilizing the ratio of nitrogen to sulfur based on nutrient removal in the grain, says Cristie Preston, senior agronomist for Nutrien.

Both sulfur and nitrogen are critical for plants to synthesize chlorophyll and protein. In the right ratios, sulfur increases the efficiency of nitrogen. "That's why adding nitrogen to fix a sulfur deficiency is a misconception. It doesn't work, and you'll wind up limiting yields and protein," Preston adds.

RATIOS BASED ON GRAIN REMOVAL

For example, a wheat crop that produces 60 bushels per acre removes roughly 90 pounds of nitrogen per acre in the grain, continues Preston. Using a 15:1 ratio, growers looking to topdress wheat this spring should apply 6 pounds per acre of sulfur.

Soybeans, given a similar 15:1 ratio, usually remove 200 pounds of nitrogen for a 60-bushel-per-acre yield. "Since soybeans are a legume, most of that nitrogen comes from nitrogen fixation in the roots. However, we need to make sure this crop gets at least 13 pounds per acre of sulfur," she says.

As soybean yields climb higher, land-grant university research aims to avoid lower protein levels, often found more in soybeans grown in the northern regions of the U.S. "As farmers continue to push for higher soybean yields, researchers find that the symbiotic relationship of nitrogen fixation cannot supply enough nitrogen to reach these higher yields," Preston says. "They are testing late-application of nitrogen around the R1 growth stage, along with making sure sulfur isn't limited, to increase protein levels." This research on the need to supplement soybeans with late-season nitrogen is ongoing.

In corn, a 200-bushel yield removes 135 pounds of nitrogen and 16 pounds of sulfur per acre. This rate provides a baseline to make sure you're applying at least this minimum rate. As you add more nitrogen, be sure to calculate sulfur at a 6:1 to 8:1 ratio.

As the soil warms up, organic matter begins to decompose and release both nitrogen and sulfur for plant uptake. For each 1% of organic matter, calculate 3 to 5 pounds per acre of plant-available sulfur every year.

Adding Sulfur To Your Fertility Program:

Sulfur is widely recognized as an important component of a balanced crop nutrition program. Growers currently have options to apply sulfur as liquid or solid fertilizers, either in the form of sulfate, which is mobile in the soil, or elemental sulfur, which is immobile until it is oxidized. A newer option on the market is Smart Nutrition(TM) MAP+MST(R), a homogenous, co-granulated fertilizer product from Nutrien, utilizing micronized sulfur technology. 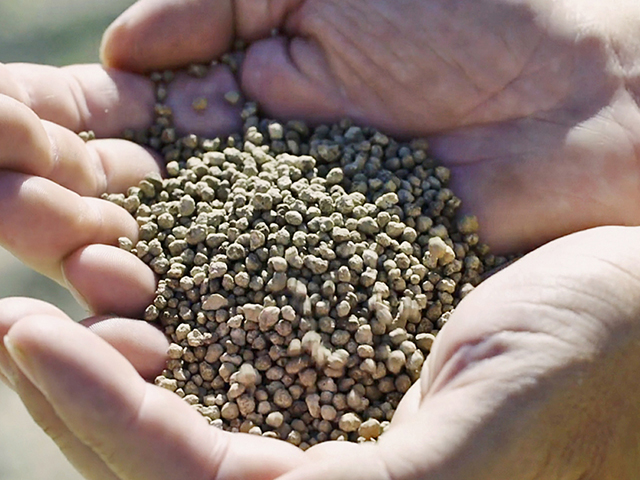