The western High Plains of Kansas spread out in a block quilt of varying shades of green mixed with tawny, already-harvested wheat fields. We're 140 feet up with Eric and Heather Purvis on the scaffold walkway near the top of their grain storage bins at E&H Farms.

"What you see there is really a two-fold strategy," Eric says, gesturing to a 200-plus acre circle of crops covered by a center-pivot irrigation rig. "One piece of this is water management while the other is conservation with diversification."

The "pie" of this irrigation circle is divided into three nearly equal pieces growing corn, wheat and edible pinto beans. The three crops benefit by being in rotation together but don't overly tax the farm's irrigation wells, because they require water at different times. That's important because water is gold in this region that averages only 16 inches of rainfall annually and relies on the huge but dwindling Ogallala Aquifer for irrigation.

Water, or the lack thereof, is only one of the challenges the Purvis family faces to maintain its three-generation operation into a fourth and beyond. As you might guess, in Weskan, Kansas, just a few miles from the Colorado border, they don't benefit from close proximity to many markets. The remote location also makes it difficult to find employees. The same dearth of people, amenities and a social life also presents an obstacle should any of their six children desire to return to the farm.

Four of the six are now with their parents back on the ground as we get a tour of their facilities. Heather, who grew up on a much smaller farm in central Kansas, met Eric at Kansas State University. She knew this place would be her home the first time Eric brought her here and turned up the farm drive.

Will the decision be that easy for their children or their significant others?

"You have to be picky who you bring back here," Heather says. "If you're a single man here, there are few single women. If you're a married man, there's a better chance of you staying to work if your wife also has a job or you have children involved in school."

Matters of the heart they can't control.

The Purvises can decide what they grow, how they grow it and how they sell it. They've sought out value-added markets. Some of their wheat is sold as certified seed, and still more is sold to specific millers and bakeries because it tests well for traits prized for making dough. They raise pinto beans as members of a cooperative, 21st Century Bean. The couple helped establish that business more than 20 years ago. Cooperative members grow pinto beans, black beans, lima beans and kidney beans, among others, which are marketed nationwide.

As for how they grow, conservation tillage has been used for several years, and they ratcheted down the amount of water they use through conservation methods that apply water closer to the ground or subsurface to lessen evaporation loss. As it is, only 3,000 of the 15,000 acres they farm is irrigated.

It's not like they wouldn't irrigate more if they could.

"In Kansas and Colorado, by law, you can't drill any new wells," Eric explains. "You can repair an existing well. Even so, the Ogallala Aquifer continues to drop 2 feet per year on average."

In the past decade, irrigation use in the region has averaged only about 25% of the amount of water authorized to be pumped because of declining well capacities, says Kyle Spencer, manager of Western Kansas Groundwater Management District 1. It represents district water users at the state level and includes most or parts of five counties.

"Without additional conservation measures, we have very few areas remaining in the district where the estimated saturated thickness of the aquifer projects a useful irrigation pumping life beyond 20 to 25 years," Spencer says. "There are wells that used to pump 1,000 gallons per minute or more that now pump only 100 gallons per minute or less."

Water districts promote water-conservation technology and have offered cost-sharing to implement water-saving methods. "What happened in the early days of irrigation out here doesn't have to continue," Spencer says. "Many producers, such as Eric's family, have made changes and are doing a much better job over the past decade or two, just not enough of them yet."

As often as possible, the Purvises want to use irrigation on the highest-value crops and the best-producing land. In a given year, they will grow about 500 acres of edible pinto beans for 21st Century Bean, based in nearby Sharon Springs, Kansas.

"They were tired of bean companies ripping them off," says Stacey Masters, general manager of the cooperative, when referencing the 76 growers who founded the business in 1998. "We try to make sure they get the price they need."

Until the past couple of years, the market in edible beans had waned, and membership in the cooperative had shrunk to 27 growers. Nearly 90% of the cooperative's sales were 2-pound bags for USDA's national food bank program. Interest in growing beans in the region has increased again -- from 10,000 acres the cooperative purchased two years ago up to 20,000 acres in 2020, Masters explains.

"The increase was mostly due to producers in this region kind of jumping off some corn and milo acres because of poor prices," she says. Then the COVID-19 pandemic hit, and the interest in shelf-stable foods such as beans exploded. "People were buying beans like crazy," she continues. "We shipped double our normal amount in March."

Eric says they sold pinto beans at harvest the last quarter of 2019 for $22 cwt, and by May, the prices were up to $48 cwt. "Part of the reason was that the supply was down anyway, and now the demand is huge." The demand increase comes as 21st Century Bean was expanding into bean sales (4-, 10- and 20-pound bags) to grocery store and restaurant-supply companies, as well as sales to individuals online.

The moves to diversify income streams at 21st Century Bean reflect Eric's thinking on the cutting costs-versus-seeking-value-added-revenue dilemma on their farm. "You can only do so much to control costs," he says. "The bigger gains are to be made on the revenue side, and we're trying to find the opportunities everyone else is passing up."

To this end, E&H Farms has been working with another Kansas-based business, Farm Strategy, that connects wheat growers with specific milling and baking customers whose needs aren't being met on the commodity market.

"The functionality of the grain for specific baking purposes isn't conveyed in commodities," says Andrew Hoelscher, owner and founder of Farm Strategy. "I can buy a railcar of wheat that has all the typical desired specs for moisture, protein and vomitoxin," he says, "and that tells me nothing about what type of flour we'll get from that wheat."

Farm Strategy does in-depth testing on the grain for traits like stability and absorption rate, qualities that make for excellent commercial baking flour. The company then "lubricates the supply chain" so the wheat can find a buyer that desires the added-value crop. The premiums have ranged from 10 cents to $1 per bushel above the commodity market.

The Purvises don't grow this premium wheat by accident. Variety, crop rotations, agronomy and nutrients are fine-tuned to produce the desired traits.

"Andrew has given us the opportunity to sell wheat for a premium, and the buyer even paid to pick it up and transport," Eric says. "This was significantly better than anything around."

The desire to add value to products, contain costs and improve agronomics has been ingrained in 21-year-old Emma Purvis since she could walk. The third of the six Purvis children, she is the one with the long-stated interest to make the family business her life. A graduate student working on a master's degree in plant breeding at Kansas State University, she is determined her academic work be practical.

"I'm looking into the protein gene that affects the end protein in wheat and how that is affected by nitrogen rates," Emma says.

She is equally realistic about the future, echoing the concerns of water-management officials. "Personally, I think we'll lose the Ogallala as an irrigation source in my lifetime," Emma says. "We can grow all dryland crops. But, we need to keep finding our niches that allow us to highlight the quality of what we're selling, our brand."

She is confident but slightly daunted by the task. "When I look at what my Dad's done to build the farm and lead it to where it is, well, those are some big shoes to fill." 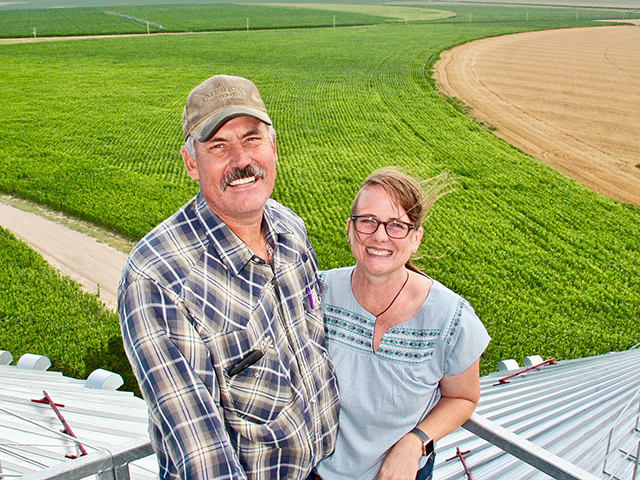