John Karlin's concern was harvest, because during storm-strewn Kansas summers, the prime window to cut wheat can come and go with one passing cold front.

Still, even with the stress of a looming harvest clouding the air, the history beneath his feet is never far from his mind.

There isn't much left of Walker Army Airfield, where Karlin headquarters his wheat, corn, soybean and milo operation; but in 1944, it was the site of a great, albeit forgotten, battle of World War II. Engineers scrambled through high prairie blizzards to turn one of America's greatest potential weapons, the Boeing B-29 Superfortress, from failure-prone lemon to war-winning bomber.

Today, there's still one hanger standing and the remnants of another. There are concrete foundations of dozens of buildings and miles of runway, the skeletal remains of the American home front.

Seventy-six years later, Karlin and his son, Jake, tackle a bumper wheat crop with a pair of Case IH combines.

The ground on which America's bomber boys learned to fly more than 75 years ago is "pretty good" for farming, says John, who went in with his father, Wilfrick, to purchase the plot in 1991. They were attracted by the potential of 2,100 acres all in one big chunk. The history was a bonus.

Walker Army Airfield was one of hundreds of facilities built in America's heartland during the rush following the country's entry into the war in 1941. There were 15 major army airfields in Kansas alone, but four took on a special role. Those in Pratt, Great Bend, Salina and Walker were the first training locations for crews of the B-29.

AT HOME ON THE RANGE
Now, interstate highway construction can grind on for years, but in 1942, it took just seven months for the wide swath of ground a mile north of Walker to go from wheat field to airfield.

Thousands of airmen and support staff flowed in, forever changing the small, agrarian towns even as the bases quickly became small cities themselves.

The bases had 500-seat theaters featuring three movies a day, as well as dramatic productions and orchestra performances. Bob Hope played in Pratt. There were churches, bars, baseball teams and even newspapers such as the "Walker Talker."

There were some incidents. Farmers complained their chickens wouldn't lay eggs when the planes flew over. Another was nearly killed when a dummy bomb landed 20 feet from his tractor. But, the bases employed hundreds of locals and welcomed the soldiers. "No one was left without 'family' for Christmas," Pratt resident Dorotha Giannangelo writes in a history of that base.

The B-29, the most expensive U.S. weapon of the war, was designed to fly farther and carry more than any other bomber. But, it didn't work.

The new Wright R-3350 engines were prone to catching fire. The plane's extreme altitude and pressurized cabin led to problems with window seals. Electrical systems failed, and the remote-control defensive gun system had glitches. Even the wings needed work.

General Henry "Hap" Arnold was dismayed to find during a January 1944 tour of the Wichita factory and area bases only 16 airworthy planes of the first 97 built. Fixing the bomber became a national priority, and Boeing engineers were rushed to Kansas.

"Planes, trains and trucks came in droves," writes Steve Birdsall in the book "Saga of the Superfortress." "Most of the work had to be done in the open, in blizzard conditions. It was five backbreaking weeks of fatigue, confusion and bitter weather."

Workers were limited to 20-minute shifts in the biting cold, but it paid off. Crews were soon able to train, often flying from Kansas to Key West and back in a day to practice. By June 1944, Kansas-trained B-29 crews were bombing mainland Japan from Chinese air bases.

Eighteen months after teams worked through the snow to make the bombers fly, a pair of B-29s -- trained in Utah -- dropped atom bombs on Japan, ending hostilities.

"Those four air bases in Kansas won the war," says Keith Goetz, who grew up in Walker and runs a Facebook group dedicated to sharing stories from the airfield.

ETCHED IN THE FIELDS
The spotlight faded quickly for towns like Walker, and it and other bases shut down almost immediately after the war.

The Japanese surrender was formalized on Sept. 2, 1945. Walker was largely closed before Thanksgiving of that year. The airfield has been slowly melting away ever since.

Other fields fared better. Pratt and Great Bend were larger, and the airfields were closer. Each purchased the property for $1, and both fields, in part, still serve the communities as municipal airports and industrial parks, even feedlots.

Buildings and equipment from all the fields were sold off.

"A lot of farmers actually bought them," says Milt Martin, who helps run a B-29 museum in Pratt.

The town of Walker, meanwhile, had just a few hundred people in the 1940s. It didn't need an airfield, even for $1. Larger cities nearby like Russell and Hays passed, as well.

A local businessman bought the ground in 1958 and played host to everything from crop-dusting to drag racing. Still, three of the massive hangers burned, and another collapsed. The remaining hanger has been used to store equipment and grain, but it, too, is now severely damaged. The hastily constructed buildings were made to last a war, not a century.

"I'd love to rebuild that hanger," Karlin says, "but what do you do? It would cost a fortune, and we just can't."

Some elements of the field, however, live on. The Karlins pull up and crush concrete from the runways to sell around the region, spreading little bits of Walker Army Airfield near and far. They plan to leave some runway sections, too, and still work daily on the airfield's large apron.

It all may not last much longer, but it's also not likely to entirely disappear.

Some war-era airfields today have plaques and some have Facebook groups, but even those completely abandoned, hangers collapsed and concrete crushed can be made out from above. Their runways remain faintly etched on the flat expanse of the Great Plains.

There, golden wheat fields wave atop one of the great forgotten fronts of the Second World War. 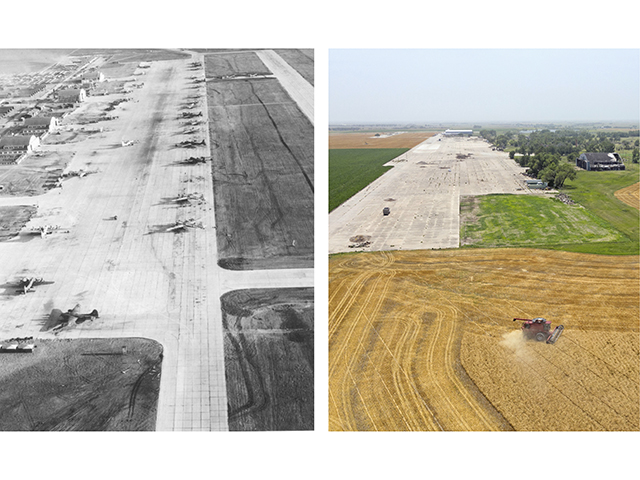