Wade Lenz was looking for a way to stretch his irrigation water and improve overall corn yields on his farm in the northern Texas Panhandle. He wrestled with highly variable soils on fields with rolling topography. His move to more efficient watering schedules and variable-rate irrigation (VRI) solved his problems; plus, he's saving money every year.

A longtime irrigator and corn producer farming near Hartley, Lenz oversees 28 sprinklers on his farm and those where he does custom work. Most of the wells supplying his pivots are drawing water from the Ogallala Aquifer at depths ranging from 580 to 640 feet with a 50:50 mix of electric and natural gas-powered pumps.

"Our home farm has a wide variety of soil types and some fields with several feet of elevation difference," Lenz explains. "We have heavier clay soils that hold water well alongside sandier, lighter soils that require more water. Variable-rate irrigation offered us a solution to the uneven watering problem."

"We also installed CropMetrics soil-moisture monitors in every field to get a better handle on our actual water needs," he explains. "That was four years ago, and we've saved water every year.

"By monitoring the soil-moisture content down to 36 inches in our fields, we've been able to eliminate one to two waterings at the end of each season, and in the spring, we're much better able to time our first irrigation for optimum crop performance," he says.

Lenz says on 800 acres he has been watching intensely, the savings of avoiding two irrigations amounts to $8,400 per season.

"We usually apply 1.5 inches per irrigation, and on my farm, it costs $7 to apply an acre-inch of water," he explains.

He also says "across-the-farm" yields of 235 to 255 bushels per acre are much more consistent with his NC+ hybrids under VRI.

"With VRI, we can apply extra water to areas that don't retain water well while not overwatering soils that don't need it," he says. "We can change the application to better match the soils by speeding up the pivot or slowing it down. I realize we're talking about 2- to 3-acre 'pie-shaped' sections, but it has still made a noticeable difference to us.

"The system adjusts the speed of the pivot to apply our typical 1.5-inch rate, and over the years, we've noticed watering an entire field won't vary by more than half a day."

Alliance Irrigation owner B.J. Ward says Lenz's upgrades are typical of a growing interest in the North Plains of the Texas Panhandle, where growers face declining water supplies and the need to save money.

"Where Wade's machines are now nozzled for 4 [gallons per minute], several years ago growers in our area were averaging 5.25 gpm; so the move to VRI is becoming necessary if farmers want to continue irrigating efficiently," he explains. "Also, with rolling fields, VRI can address the problems irrigators have with significant pressure differences encountered when a sprinkler moves downhill."

Adds Lenz, "You can speed up over less-productive soils and concentrate on the soils that will naturally produce more corn."

His CropMetrics system is based on 3-acre zones determined by electrical soil conductivity and topography along with a soil-moisture monitor in each field.

"We install the monitors on a representative spot in each field at the corn's 4 to 5 leaf stage and then remove them just before harvest," Lenz explains. "I chose the CropMetrics monitors because of their 'press fit' design.

"Many monitor suppliers dig a hole, install the monitor and backfill the hole with a slurry of the soil that came out of the hole. That changes the environment surrounding the monitor, and I don't think it provides an accurate representation of the field's soil structure," he says. "The CropMetrics monitors are simply pushed into the soil, leaving the surrounding soil undisturbed."

Another yield-boosting benefit of VRI for Lenz has been the ability to apply up to 65% of his crop's nitrogen (N) through the sprinklers. His fertility rates are based on yield goals and annual traditional soil-sample analysis.

"We normally use about a pound of N per bushel of our yield goals and try to apply as much as possible with the sprinkler," he explains. "We run a starter band with 45 to 50 units of N preplant and then apply additional nitrogen with our preemerge application. The rest we spoon-feed with the sprinkler from knee-high corn to the blister stage."

Lenz's fertigation pumps run at a constant 25 [gallons per hour] rate, and the sprinklers' speed variations seem to match the fertility needs of the various soils.

Overall, he says the split nutrient applications and VRI fertigation allow him to produce a bushel of corn for about 0.8 to 0.9 pounds of N.

"On some of the custom farms we work, blanket nutrient applications regularly take 1.1 to 1.2 units of N per bushel," he explains. "I just think the extra precision of the VRI fertigation and our split early-season applications help us save the additional nitrogen."

In Dalhart, Ward says the improvement in nutrient management with VRI and fertigation is typical for growers who combine the two systems. "It just seems to provide that side benefit in addition to improving yield consistency."

Overall, Ward says the move to better scheduling and more efficient water application through VRI is becoming more popular in the Southern Plains.

"With our declining water table, these technologies are no longer 'just nice to have,' they are becoming necessary to stay in business," he explains.

He's following new developments from CropMetrics, Lenz says, particularly a "virtual predictor." It relies on mapped soil profiles, localized soil-moisture data, computer modeling and agronomist insights for irrigation scheduling -- rather than relying on actual moisture monitors. For now, however, he's quite satisfied with the changes he has made. 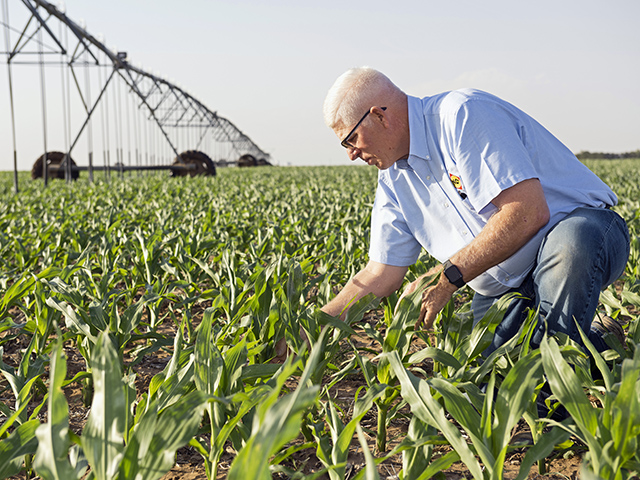