Farming in North Dakota can be an exercise in efficiency.

Consider what it takes, solely from a physical standpoint, to get through the harvest of sugar beets, a labor-intensive but alluring crop that demands a 24-hour effort when the crop is ready.

"You grab a few minutes of sleep wherever you can," says Joe Morken, who farms soybeans, corn and sugar beets outside Casselton, west of Fargo.

Waiting for an empty truck at 4 a.m.? Close your eyes, even if you'll just get five minutes.

Efficiency is often the difference between profit and loss, between making it and not, especially with that harsh northern winter that cuts into the growing season and erases four, maybe even five, months of that precious time per year. Efficiency is at the heart of every decision Morken makes.

"It's just different up here," says Morken, who's gotten to know farmers around the country since joining the North Dakota Soybean Council.

"Our window is so short for harvest, and you have to go nuts until you get everything off," he says. "I talk to some of the southern boys, and they work hard. They're working 12-hour days. But, it's not quite the grind. They want to get their crops off in great condition, but we have to get the crops up and have the field dug before it freezes solid."

That often puts a deadline of early November for all fieldwork on each season. Last year, however, early snows brought things to a screeching halt midway through October, even before much of the corn was out of the field. Wet conditions gave way to frozen ground, and there was nothing left to do but dream of spring.

And yet, Morken loves it -- maybe not when the temperatures dip below minus 20°F, and not when he can't harvest the corn before the snow. But, farming in North Dakota works for him and his family in a way that may not be apparent from the outside.

"From a climate standpoint and a growing window, to be further south or to be in the I states, that would be pretty good," Morken says. "But, this valley, the soil that was created and left behind, boy, I find it hard to believe there's any dirt better than right here."

Generations of Morkens have prospered farming the Red River Valley, 15 miles north and west of Fargo, and now Joe, his wife, Robin, and their two boys, Hayden, 9, and Corbin, 7, farm 3,400 acres with Joe's parents, Harvey and Mary.

They make it work by squeezing everything they can out of what they have, be it land, weather, equipment or even themselves.

That's meant a gradual shift in crops and practices since Joe came back on board after graduating from North Dakota State College of Science in 1999. The Morkens phased out wheat, once one of two staples, when the crop became a struggle financially, and they've tried plenty of other crops on their ground through the years.

Now, they focus on what works in that soil and for the pocketbook: corn, soybeans and beets.

Getting the last drop has also meant a focus on conservation practices, creatively at times.

That short growing window means postharvest cover crops usually won't take, but the Morkens have experimented with air-dropping cover crop seeds in August to give them a chance to get started before harvest.

"It's just the climate. It kills the mosquitoes, but it also makes some things difficult," Joe says.

The farm has expanded in the two decades since Joe came back; but, he says, as some others may look to continue gobbling up ground, he's happy to stick with what he has.

It all comes back to efficiency.

"We could probably add a few more quarters and still be OK, but anything more than that, and we'd need another combine. We'd need more equipment," he says.

There's even an eye to making things work efficiently in the future. It may be 15 or 20 years before Hayden and Corbin decide whether they want to come back to the farm and get in on the family business, but the potential for that decision drove the Morkens' most recent land acquisitions.

"We had enough ground but took on more with hopes the boys might come back. We had to think about how we'd support three households," Joe says. "You have to take it when it comes."

So it goes when farming in North Dakota. You have to strike when the window's open. It's not always long, but, the Morkens agree, it is a beautiful window.

> Watch the video at https://spotlights.dtnpf.com/… 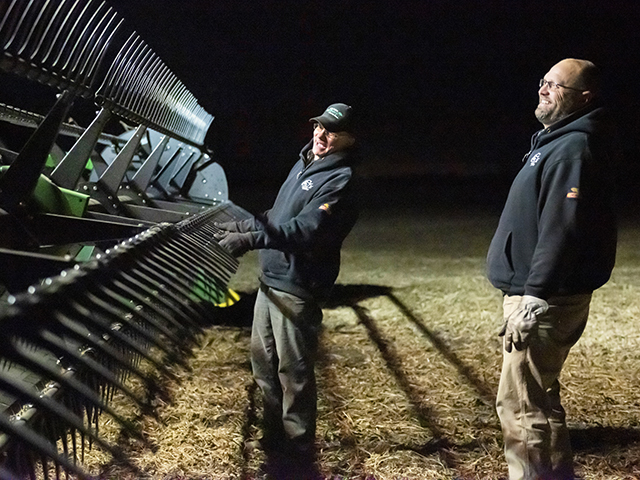