Dustin Edwards is nothing if not flexible. He could, for example, expand on the 3,000 acres he currently farms. But, he's having a hard time imagining how that would work right now.

"My big thing is doing more with less," says Edwards, 38. He is a busy man, putting a lot of miles on his truck thanks to rental farmland spread out over more than 90 miles north to south in eastern Kansas.

This isn't idle chatter on Edwards part. He's seen the other side of the fence, and it wasn't what he thought it would be.

Five years ago, Edwards was farming 5,000 acres. As commodity prices declined in the doldrums of 2014 through 2016, he chose to shed acres -- mostly where landowners were reluctant to lower rents or shift to a crop share type of lease.

He also cut overhead. The past three years, Edwards used one tractor for everything. "We put 750 to 800 hours on that tractor each year," he says. "There isn't much room for error when you have less equipment."

He worked the operation to be more efficient in moving equipment from one location to another, making the most out of a trip. He even cut out most of those runs for takeout food for the harvest crew.

"We pack our lunch most of the time now," Edwards says. "Three years ago, we bought lunch every day. Now, we have our own cooler and spend $50 at Walmart on food to make lunches, and four of us eat for a week."

In 2021, would he farm additional acres if the opportunity was presented? "I won't kid you," Edwards laughs. "I have the typical farming spirit, so if someone came along and said, 'I have 3,000 acres, do you want to rent it?', then yeah, I'd have to be interested."

But, he adds he doesn't want additional acres just for the sake of growing. "I'd have to determine whether it could be profitable while gauging whether I'd need much additional equipment," Edwards says, noting corn and soybean prices would need to be improved. "You can't make much money with $3.20 corn."

There are a lot of producers with Edwards' mindset. Given today's crop prices, who is really in a position to expand?

"An individual that has quite a bit of capital," says Allen Featherstone, head of the department of agricultural economics at Kansas State University. "You'd have to have well above average income statements -- in the upper third or quarter of all producers -- to be able to cash-flow anything new.

"The way they get in that position is by trying to hold onto equipment longer than they normally would," he says.

Another help, Featherstone explains, is a shift to some type of crop share rent as opposed to straight cash rent.

"This involves more equity-sharing of profits," he says. "The trick is finding a landlord who wants to do that."

Edwards can check both of those boxes. His equipment purchases have almost universally been used. His rents have nearly all been converted to crop shares, with landowners essentially receiving one-third of the crop while paying a third of the fertilizer bill.

It's share rent that allows Edwards to avoid having to pay cash up front prior to the season. That is a big advantage for him when it comes to risk.

"My landlords can make more money on shares, and it takes a lot of risk off my table," Edwards says. "This is probably the most important change I've made."

He also stresses that in today's market, there's a lot of really good used equipment available, with the difference between that and new being in the tens of thousands of dollars on every piece.

There are several other areas Edwards has focused on to become more efficient and improve profits.

He treats soybeans with the same love as corn. He switched from 30- to 20-inch rows to help generate a better canopy to squelch weed growth between the rows. He aspires to make his soybean fields as weed-free as possible by starting with preemerge herbicides in the fall and spring. "The easiest way to kill a pigweed," he says, "is to never see a pigweed."

When it comes to fertility across the farm, urea is the preferred nitrogen fertilizer source whenever possible. Urea is cheaper than anhydrous ammonia, and Edwards doesn't have to use another piece of equipment to apply it.

A common way to boost income for many farm families is to pick up additional work when possible and profitable. Edwards does some custom-farming operations for others on occasion.

He also benefits by getting part-time labor help from his brother, who, in return, can use Dustin's equipment to farm his own 500 acres. The brothers also trade labor and machinery to help farm their father's farm -- another 800 acres.

Questions about farm size and how much he wants to grow the operation factor in how important it is to spend time with wife, Ashley, and their three young children: Jett, 10; Emma, 7; and Eli, 3 1/2.

Edwards says he's grateful for the flexibility of a farmer's life.

"This past summer, I wanted to drive to Illinois to get a look at a used combine," Edwards says. The catch was that the two younger children wanted to go with him. So, they loaded into the truck with Dad, toting blankets and iPads, and made the 12-hour round-trip excursion in a day.

Back at home, the children gushed to their mom about the places they ate (mostly drive-throughs) and the things they saw. They had crossed the Mississippi River -- "the biggest river in North America" they informed her.

"This job allows me to take the kids with me on numerous occasions," he says. "These are things they will remember for the rest of their lives."

To date, about $30 billion has been authorized for Market Facilitation Program (MFP) payments to U.S. farmers to dilute the effects of the U.S. trade war with China. The program has particularly affected the soybean market, where China has historically been a significant buyer. That these MFP payments have been helpful the past couple of years isn't in doubt.

"A lot of farmers would be in really bad shape without them," says farmer Dustin Edwards, of Lebo, Kansas.

"Without MFP, Kansas farmers could be looking at that farm income dropping to about $20,000 in 2020," Featherstone says. Another round of MFP payments has not been authorized for 2020. He says China has been more aggressive in crop purchases in 2020. In general, U.S. farmers received government payments that were more than the short-term price effects of the trade war, according to an economic analysis by Kansas State University economists Joseph Janzen and Nathan Hendricks. In particular, the pair found that payments for cotton and sorghum were substantially higher than the price damage inflicted by the trade war.

Even with the MFP payment, 18% of Kansas farms lost money in 2019. In 2020, an estimated 40% of those farms will lose money, the Kansas State University economists agree. Nearly 70% of farms will earn a net income below $50,000, which is far below the typical family living needs. 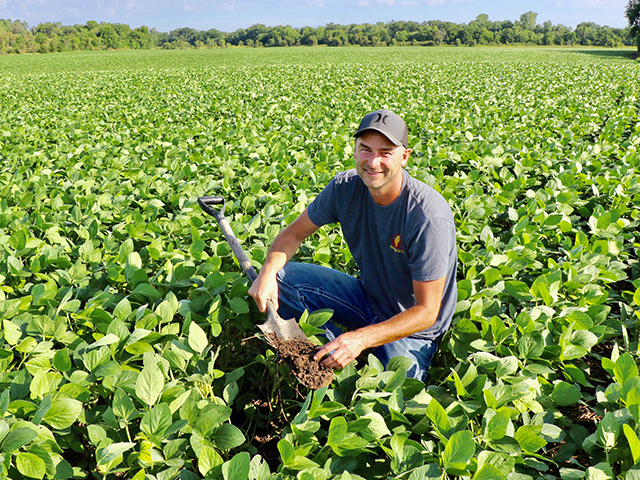