When Jake and Abbey Sass want to sample the fruits of their labor, they can drive into nearby Fountain, Minnesota, and quaff one of several beers at Karst Brewing. The beers are custom-made using hops grown on the 1,300-acre family operation in this hilly southeast corner of the state.

The experience is a satisfying one. Like Karst Brewing, the Sasses' is a small business looking to add value to its products when and where it can while cultivating a loyal and local customer base. In this instance, the two businesses are doing it together.

In the fall of 2017, that wasn't a given. Karst Brewing owners Eric Luoma and Sandy Seha, who had only opened their doors four months earlier, bought some of the Sasses' freshly harvested, first-ever hops crop. They made what's called a "wet hop" beer to release on a September Sunday afternoon. This would be the first real test of whether the Sasses' new venture could help make a good product, generate customer interest and become a mainstay crop.

"We knew it would be a great beer because Eric is a terrific brewer," Abbey says, "but a wet-hopped beer has a different taste, a different mouth feel."

The Sasses, along with Luoma and Seha, promoted the event on social media, set up tents at the tiny brewery, made sure there was music, sampled the product and crossed their fingers.

Then the crowd rolled in. Most from the Fountain and nearby Chatfield areas, more than 200 people showed up. The tasting was a huge success. "I was pleasantly surprised by how many drinkers of more typical beers were supportive of the wet hop beer," Abbey says. The Wet Hop day is now an annual event at Karst the third Sunday in September.

The move to grow hops was part of a plan by the Sasses to create new or value-added revenue streams that will eventually allow them both to farm full-time. Jake is business development manager for a medical technology company and does much of his work from home. Abbey handles many of the daily administrative duties of the farm, while both handle the labor.

While hops is the sexy new crop, it's still only a small part of the operation. The rest of the farm is devoted to corn, alfalfa and 200-plus head of cattle. The family runs a cow/calf herd and has ventured recently into custom finishing. The success with hops has them exploring demand locally for branded beef.

"We hope to take the farm to a more customer-facing type of business model," says Abbey, an interior designer and former Miss Rodeo Kansas. She met Jake at a wedding in her home state six years ago. "There is a booming market for craft beer, and it seems the demand isn't going away."

The seed for hops was planted when Abbey, as part of her Rodeo ambassador duties, visited a hops farm in Oregon. She found the crop to be "beautiful and fascinating." As it turned out, the hops farmer Abbey met that day is now a mentor and adviser to the couple's new business, Civil Sass Hops.

"We want to develop two product lines," Jake explains. "Hops will scale up with the maturing brewery industry around us, while direct-sale beef will take a redirection of our cattle value chain. In the end, who doesn't like beef and beer."

There are several things to consider in a successful generational transition, says Melissa O'Rourke, Extension farm and agribusiness management specialist at Iowa State University. Among them are building the farm-management team while taking into consideration the interests and the value of assets for minority and off-farm owners.

She notes that when multiple parties with varying interests are involved, it's vital to have regular, planned meetings to communicate and update one another on financial and operational developments.

In the case of the Sasses, parents Scott and Barb Sass have generally relinquished day-to-day management to Jake and Abbey. Both couples have ownership interest in the farm, as does Jake's brother, who does not farm.

As ownership interests transition through the years, "periodic appraisals may be necessary," O'Rourke says. "The owners may agree upon an updated, renegotiated fixed price based upon an inventory of all assets in the farm business." Provisions that govern first option and buy-sell agreements can help protect minority owners.

For the Sasses, Scott took an off-farm job more than a decade ago that would allow him to eventually either sell or rent the farm if Jake didn't return, or step aside if he did return.

"We couldn't be happier that Jake has come home to farm," Scott says. "There were plenty of times when we wondered if he'd ever come home at all." You can hear the catch in his voice as he speaks.

Following high school, Jake served nearly 12 years in the Army after an appointment to the United States Military Academy at West Point. An officer in combat during several tours in Afghanistan, Jake also served as a commander with the Army Rangers at Fort Riley, in Kansas. He met Abbey during this assignment.

"My military service took every ounce of courage and conviction I had," Jake says. "This farm evokes the same attributes. When I transitioned from the military, I needed the farm more than it needed me."

The young couple benefit by being able to use Jake's parents' equipment and buildings. Replacement machinery or anything additional -- like a recently purchased used hops harvester -- is on Jake and Abbey.

The young Sasses are building their own cattle herd a few head at a time with new heifers from Mom and Dad's animals. "The plan is after five years, they'll have all the calves," Scott says.

Though small in acreage, hops offer additional opportunity. The Sasses can produce about 1,500 pounds of pelletized hops per acre (nearly all hops in brewing are used in a pelletized form). Depending on the variety, you can sell it for about $12 per pound. After expenses, the Sasses can net $11,000 per acre.

The couple have tripled production in two years, from 1 acre to 3. The number of customers has increased to 10 to 12 from two. More than 95% of all hops grown in the U.S. are produced in Idaho, Oregon and Washington. Brewers in Sass's region like the idea of sourcing them locally as long as the quality is high.

"We're obviously not a big hops operation, so we're not into servicing huge contracts," Jake explains. "I can tell a brewer they are going to get our premium quality hops, because at our size, that's all we have."

The purchase of a harvester along with the construction of a drying/storage facility at the farm raises the possibility other farms might grow the crop. "We've entered into some nice conversations with other potential growers about harvesting and processing their crop," Jake says.

Near the end of the day, Jake and Abbey hike up the pasture across the road from their house to check on a couple of pregnant mama cows.

"Seeing all that life that depends on your work makes us humble," Abbey says. "We feel part of something bigger than ourselves." 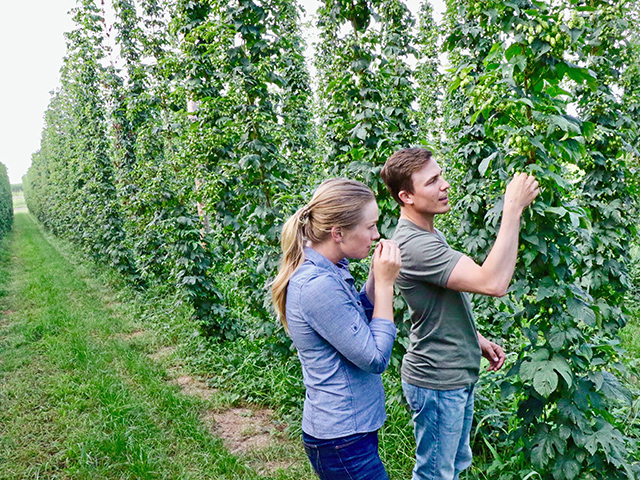