Paul Hodgen is applying UAN (urea-ammonium nitrate) 32% fertilizer in the last week of June and is actually in a pretty good mood. In a more typical year, this fertilizer application would have taken place at least a couple of weeks earlier.

Unlike a number of farmers in his area -- and even large parts of the Midwest in general -- he has been able to plant every one of the near 6,000-acre family operation in central Indiana, near Roachdale. That wasn't true for many farms, as seemingly near-constant rains kept machinery out of the fields to nearly unheard-of late dates.

"Normally, I would be done by now," Hodgen says of the fertilizer he is applying on corn rows 20 inches apart. "In an ideal year, the corn would be tasseling or close to it."

Hodgen, an agronomist with a doctorate from the University of Nebraska-Lincoln, is a stickler for making research-driven decisions. Often, those decisions are based on his own on-farm experiments. Admittedly, the weather eliminated much of what he had planned for 2019 in regard to field research.

Asked if this past year taught any lessons, Hodgen says the biggest educational experiences haven't been agronomic: "I've learned more about marketing corn this year than I thought I would. Had you asked me a month ago that I would see basis levels this high on old-crop corn, I would have laughed."

That said, Hodgen says he still bases a lot of what he does on the farm on what works in their specific fields.

Take for instance his nitrogen management. He's moved mostly away from preplant nitrogen applications. For example, he mentions a farm he was offered to rent at the 11th hour in 2018 -- so they didn't have time to incorporate nitrogen before planting.

"We found out we could manage a crop and raise a profitable crop off of sidedressing as much as anything else," Hodgen says. In mid-June, he also blew urea over the top of a 200-acre corn field. In 2019, they handled the entire farm with these methods while avoiding the use of any nitrogen applications before planting or the previous fall.

"We're glad we weren't applying nitrogen in the fall in 2018 prior to the arrival of numerous heavy rains," Hodgen explains. "It would have been like burning $100 bills."

Hodgen is meticulous at testing corn hybrids and soybean varieties -- and keeping track of the desirable core traits -- even after particular hybrids and varieties are changed every five years or so.

"This is one of the biggest things we do," Hodgen says. "As fast as they change, we need to be on top of knowing how the seeds will perform on our farms and get the best ones for us in the rotation. We can't afford to miss out on one. A couple of bushels per acre is important."

To this end, Hodgen does a lot of reading and keeps in touch with technical agronomists with several seed companies. The necessity to do this is doubly important because he is increasingly growing more in-demand, non-GMO soybeans. He wants to capture that premium but also has to stay on top of the genetics in the non-GMO realm.

Hodgen has also conducted some tillage research with an interesting result. In the fall a few years back, he purchased a vertical-tillage tool with the idea it might open up the soil and boost soybean yields. He replicated trials in three fields on 30 acres in each field.

Certainly, the soybeans looked better the next year, but there was a catch. At harvest, the yield was 2 bushels less per acre than the previous year.

"Trust your farm data," Hodgen says. "Just because the crop looks better doesn't mean it is better. We produce the math, that is the truth-sayer going forward."

But maxims aren't always hard and fast. On vertical tillage, "We will do it in the right circumstance when the soil is really compacted or very poorly drained that needs to be opened up," Hodgen says.

Speaking of drainage, he concedes that it may go without saying, but the installation of subsurface drainage is likely the "best use of capital in a farming operation in the eastern Corn Belt." The yield monitor is the proof.

"We've seen 30- to 40-bushels-per-acre improvement right off the bat after installation of a full pattern tile system," Hodgen says. "Before, I never thought a full system on 50-foot centers would pay for itself, but the return is clear."

The Hodgens (Paul farms with his father, Abe) cost-share the expense of drainage tile systems with landowners and, in return, generally get a five-year lease agreement. "You get a level of certainty with this improvement," he says. Tiling isn't a guarantee of increased yields but has worked more often than not.

They have also increased the maturity range of seeds they use on their farm. Prior to his return to the operation in 2012 (Hodgen worked for Monsanto's seed business after college), his father would have never used 118- or 120-day maturity corn. He believed 113-day corn would have been the desired maturity for their geography.

"I knew from working at Monsanto that there was some good germplasm in those hybrids with longer maturities," Hodgen says. "We've expanded the range we are planting maturitywise. We planted 118-day at the end of May this year."

So, how did the corn turn out? Harvested the last week of November, the 118-day corn had a yield of not quite 200 bushels per acre with 20% moisture. "The fuller-season stuff often has more potential," Hodgen explains.

What did adverse conditions teach Hodgen in 2019?

"Stick to your agronomy plan and work your plan," he says. "Get the full-season maturities in the ground as soon as you can, even if later than desired." The longer maturities -- even in a shorter season -- generally outperformed the shorter-season crops.

As for 2020, Hodgen focused on several research projects, which went by the wayside in 2019. They include testing variable-rate seeding on soybeans and continued work with nitrogen management.

Based on soil types, geographic conditions and previous yields, the soybean seeding rates may run anywhere from 80,000 per acre to 180,000. "We want to get an adequate stand to maximize yield without so many plants that lodging could be an issue."

He also continued to experiment with the use of high-clearance machinery to spread urea over growing corn. "There is a way to work that into our plan and use a bit cheaper nitrogen source," Hodgen explains. "We did it this past year, but that was purely out of necessity. Now, we might experiment with it in a more deliberate way."

He recommends doing experiments in blocks in the field rather than long strips. His blocks are generally 10 to 15 acres in size in two or three fields.

"With one or two strips across the field, it is easier for some external anomaly -- like a wet spot -- to skew the results," he says. "You want a large enough area that if the response is true, you will see it definitively.

"The biggest thing to remember is to have untreated checks at those sites as well to make a real comparison," Hodgen continues. Everything done in the experimental block should be identical to untreated checks except for the treatment in question. 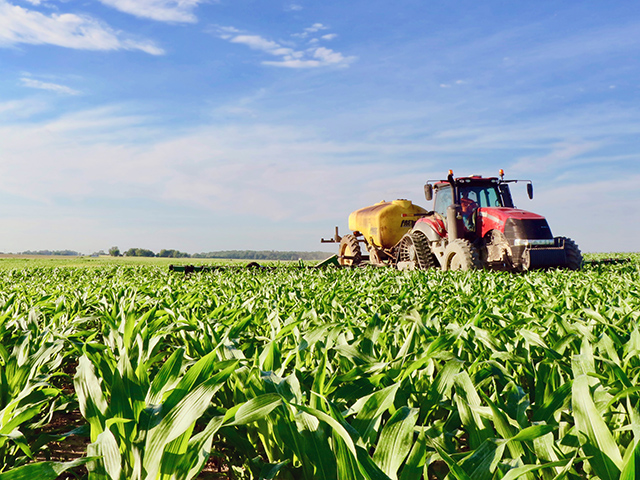