A group of farmers and landowners in northwest Kansas are spearheading efforts to test the water on saving water.

Like other irrigated farmers on the Great Plains, the 110 members are saddled with the dilemma that the depletion of the Ogallala Aquifer appears inevitable, but to cut back their water use to save it would lead to their rapid demise. However, both fears have been eased according to results of a recently completed five-year effort.

In 2013, neighbors in the 25,000-acre Sheridan No. 6 area of Northwest Kansas Groundwater Management District No. 4 (GMD No. 4) utilized new state legislation to write their own water-use regulations by forming a Local Enhanced Management Area (LEMA).

In a series of 13 meetings, the group agreed to ask the state to enforce a five-year allocation of 55 inches of water, roughly 20% below their long-term average use. In hindsight, their effort has been so successful that it's been extended another five years and expanded to include the rest of the 11-county district. It is perhaps poised to be the blueprint for groundwater regulations across the rest of the state.

In a final report of the LEMA's first term, Kansas State University ag economist Bill Golden found that the agronomic, economic and hydrologic impacts have been amazingly positive. "We compared what happened on farms inside the LEMA to farms within three miles outside the boundary. To most people's surprise, the results show that producers inside the LEMA used less water and slowed the decline of the aquifer while maintaining and even increasing farm profits," Golden says.

Corn is the focus of much of the concern over groundwater use from the aquifer, and Golden found significant impact for that crop within the LEMA. Producers within the LEMA (targeted area in the graph below) generated a 17% reduction in the average groundwater use per irrigated corn acre relative to those outside the area (control area). During the five-year study, they used an average of .85 acre-feet per acre on irrigated corn compared to 1.24 acre-feet per acre used by those outside the area, he explains.

The goal of the LEMA legislation is to reduce groundwater consumption to conserve the state's water supply and extend the life of the Ogallala Aquifer. Records indicate the Sheridan No. 6 effort met that goal. Measurements by the Kansas Geological Survey indicate the rate of decline in the depth of water in the aquifer has gone from about 2 feet per year prior to enactment of the LEMA to the current rate of about 5 inches per year. And, data indicates the water being saved is staying in place rather than being pumped out of the aquifer elsewhere.

"They tell us that we could be extending the life of the aquifer by 20 years, and that means another generation of our families and others in the community can benefit from it," Hoxie, Kansas, farmer Mitchell Baalman explains. "The status quo wasn't sustainable, so we had to change. The biggest impact of the restricted allocations we put on ourselves is that we've become better managers. We're paying more attention to irrigation scheduling, adopting more efficient irrigation technologies, fine-tuning our crop mix considering the impact that everything we do has on the water. It's made all of us better farmers."

Baalman is relieved water levels in his wells have stabilized. "There was about 200 feet of saturated thickness in this area when my father first started irrigating in the 1960s, and that's fallen to about 60 feet today. We've gotten more rainfall in recent years, and that's helped, but there's no doubt the LEMA is saving water," he says.

Former GMD No. 4 manager Ray Luhman agrees with Golden that growers have found saving water to be less painful than they anticipated. "There was far less objection to extending the LEMA last year than when it was first formed in 2013, because growers now realize they were overwatering. The idea of saving water has caught on, and now, the rest of the district has taken on the challenge with a second LEMA, and other irrigation districts in the state are considering adopting this local, producer-driven approach, as well," he says. 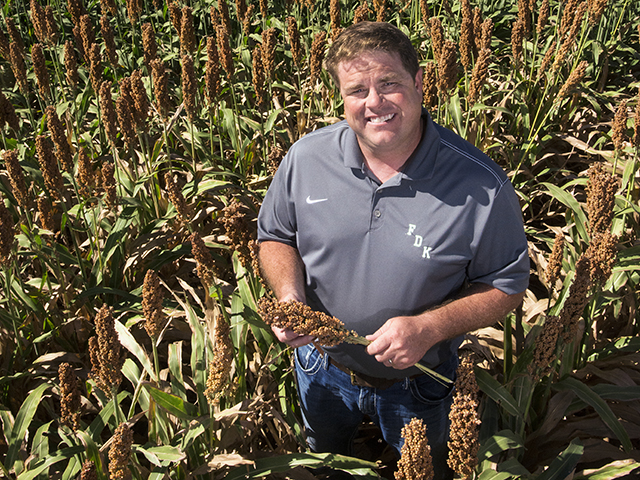