If your cow herd is 100 head or less, you've got plenty of company. According to USDA, more than 90% of cattle producers in America fit that category.

While it's true that economy of scale can be a concern in this case, smart cattle raisers know where there's a will, there's a way. Ingenuity is sometimes better than money in the bank.

Dan Miller manages cattle in Owenton, Kentucky, at Eden Shale Farm, an operation owned by the Kentucky Beef Network (KBN), an arm of the Kentucky Cattlemen's Association. He is a big believer in innovation and says not to discount what small producers are capable of, starting with a positive impact on the environment.

"In everything we do, we look at practices that have a direct production benefit and a positive environmental impact," Miller explains.

The only revenue to run the 100-cow commercial herd here comes from the sale of calves and market cows, he notes. So, every exchange is evaluated with a cost-benefit mindset.

WATER IN THE ROUND

The simple act of using tire waterers is a prime example of a practice that works for the environment, as well as contains cost.

Miller says they haven't fenced the herd out of the creeks, but they have found the cattle prefer to drink fresh, cool water from the tire troughs.

"Twelve to 14 mature cows can drink at one time around an 8-foot-wide tire," he says. "There is less pushing and shoving, too, so the less passive cows don't have to go to the creek to drink." That means creek banks aren't torn up, and cows don't loaf in the creek, soiling it with manure and urine.

At Eden Shale, the water is even recycled rainwater taken as runoff from barn roofs and stored in cisterns or aboveground tanks. Miller says another option is to use a spring head for the water source or gravity flow to get water from wells, ponds or creeks to troughs.

They built the watering stations for around $2,000 to $2,500 each. That cost included gravel, geotextile material, plumbing and pipe. The tires were free. In winter pastures, they poured an 8- or 9-foot concrete pad around the tires, which raised the cost to approximately $3,000.

One note of caution when using tires for anything from water troughs to mineral feeders: Keep an eye on them. Cattle can chew them, swallow the embedded wire, and end up with hardware disease. It's not common, but it pays to be aware.

Besides keeping calves healthy, both while they're on the cow and in the 90- to 120-day backgrounding phase, Miller believes a preventative herd-health program is one of the keys to cow fertility.

"We vaccinate three times a year. That's one extra time compared to most operations, but we've found it keeps their immunity up, and we have less of a pull rate," he says.

Miller estimates the extra work costs him approximately $11.50 per cow, but he emphasizes that "it is easier and cheaper to keep them healthy."

Keith Tuck is a Moneta, Virginia, cattle producer who knows how to stretch a meal for his cow herd.

In 2010, the cattle producer divided his 110-acre fescue and clover pasture into six paddocks of 15 to 20 acres each. Beginning the 2011 growing season, he rotated cows every seven to 10 days. Since then, he's been able to incorporate his 20- and 26-acre hayfields into the rotation. He's in the process of dividing paddocks in half and adding more water hookups. In addition, he's planted switchgrass with plans to plant bluestem next year.

"We're trying to get down to a three- to four-day rotation," Tuck says.

During late fall and winter, his 75 to 80 cows strip-graze stockpiled forage. The frequent rotations mean his cows are eating higher-quality vegetative forage. Plus, since the forage isn't overgrazed, it grows back faster. As a result, his cows stay in good body condition and consistently average 95% conception rates in a 60-day breeding season. At the same time, he's reduced hay feeding from an average of 120 days a year to 60 days or less.

"I paid for it in two to three years with hay savings," Tuck explains.

While he jumped into his rotational-grazing system all the way, he says for those who want to try it first, he advises simply dividing a field in half. That will force a simple rotation, and he promises you'll see a difference.

Never forget that getting a cow bred is the key to the rest of the season and an operation's overall profitability.

"The cheapest thing you can do is get them bred and keep them bred," Miller says. As a result, cows and heifers at Eden Shale are on a synchronization and artificial insemination (AI) program.

The biggest benefit to AI is synchronization," Miller says. "The calves are the same age, the same size, and we have a uniform group at marketing time. This year, 94% of the calves came in the first 45 days of the calving season. That adds up even more than the genetic payoff."

The genetic factor is still a major plus. In 2013, when KBN gained use of Eden Shale, they started with cows purchased from the stockyard.

"AI was the quickest way to improve the genetic pool," Miller says. "We've consistently improved our weaning weights. The first year, they were terrible, 350 pounds. Last year, they were 485 pounds. We still have a lot of work to do, but we're heading in the right direction."

The higher quality of the calves also means they can sell more in the state's graded Certified Pre-Conditioned for Health (CPH) sales.

Between semen costs and supplies, as well as three trips through the chute, Miller estimates the synchronization and AI program cost around $60 per female, but he still says it is worth it. By selling open cows and keeping AI-sired heifers the last few years, they've averaged a 66% single-service AI conception rate and an overall conception rate (natural service plus AI) of 92% in a 60-day breeding season.

Storing hay outside can result in losses of 30 to 35%, Miller explains. At Eden Shale, they guard against waste by storing hay in hoop barns.

They take conservation a step further by using hay feeders. These are made with either feeding panels or hay rings, and they are designed so cows don't waste a bite. They are set on a fenceline to make it easier and quicker to feed.

For demonstration purposes, the farm has five different hay feeders in a row, making it easier for producers to compare them.

The most expensive feeder is set on concrete to keep cows out of the mud and has a roof to keep hay dry. Next is a feeder on a concrete pad minus a roof. The least-expensive feeder, made from half a hay ring, sits on a heavy-use area made of gravel and geotextile fabric.

The cost of the materials for the feeders ranges from $3,950 down to $1,340. Miller says if he was choosing one for his own operation, he'd go with one of the two set on concrete.

"Concrete is a little more expensive, but longevity makes it a better investment," he says. "Whether you put a roof over it or not depends on how fast your cows eat hay. If they eat fast, you can leave off the roof."

When a producer can't come up with a truckload lot of uniform calves, he pays for it in the marketing arena. Virginia's Tuck has found a way around that limitation by pooling his preconditioned calves with calves from other producers in the area.

In the 2017 and 2018 Bedford Beef Producers Association Feeder calf sales, the group saw premiums that ranged from $44 for 670-pound heifers to $141.50 for 785-pound steers. This was at Springlake Stockyard, where the calves were graded and sorted into load lots of like size, breed type and quality.

"I get more money out of them," Tuck explains. "I try to breed a good product, and I want a premium out of them."

The folks at Eden Shale make learning easy. The farm's purpose is to serve as a demonstration farm for producers. But, if you can't get there in person, not
to worry.

Visit Eden Shale's website, take a virtual tour and sign up for the blog. There are videos of how to make tire waterers and fenceline hay feeders.

To get some tips oriented around your unique production environment, check with your state's Extension service for field days and short courses. Take the time and attend. Even if you don't learn something, you'll meet peers in the cattle business and maybe even find a new market outlet. 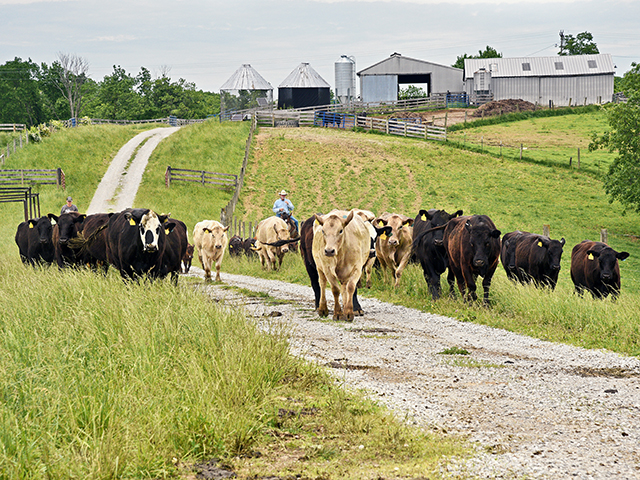