President Donald Trump finds strong support in rural America in the lead up to the 2020 election. The DTN/Progressive Farmer Zogby Analytics Pulse of Rural America poll finds 50% of rural adults intend to vote for the president -- a lead of 18 percentage points over Democratic candidate and former vice president Joe Biden.

Fifty-three percent of rural adult Americans approve of Donald Trump's performance as president, including his handling of the coronavirus outbreak. Support for the president is strongest in the critical central Great Lakes region of the U.S. (55% of rural adults support him there), among those 65 years of age and older (60% support him), and married rural adults (57%).

Brenda Frketich farms near Woodburn, Oregon, and is highly active in agricultural politics. She is a strong supporter of the president. "I appreciate his emphasis and appreciation for farmers," she says. "I appreciate his emphasis on streamlining regulations, rolling back WOTUS (Waters of the United States regulations) and including us in the conversation. I doubt we'd have that [seat at the table] with Biden."

Twenty-nine percent of respondents farm or have members of their families who farm. Forty percent identify as Republicans, 23% as Democrats and 36% as Independents. The majority of respondents are under 54 years old; 80% are white; and 11% are Hispanic. Fifty-five percent are married. Respondents are evenly split between male and female. Responses came most frequently from the Great Lakes region -- 37% of the total -- from the South (27%) and from the West (22%).

There are three issues that will most influence the way rural adults will vote in local, state and national elections in 2020. Sixty-two percent say the strength of the economy is most important; 48% say health care; and 39% say protection of the Second Amendment's right to bear arms. The economy is especially prioritized by Republicans (74% consider it an important issue) and Southern adults (67%).

The survey does show indecision and dissatisfaction, as well, in rural America. Eleven percent of rural adults are undecided about their choice for president.

Forty-two percent of rural residents and farmers strongly or somewhat disapprove of the president's job performance.

P.J. Haynie will vote for Biden. "The primary reason," Haynie says, "is the markets when Joe Biden left office [as vice president]. "Beans were $12, corn $4.50. The markets were better."

Trade is also an issue that lands Haynie in the Biden camp. "Other countries don't take us seriously under [Trump's] leadership. [Biden] has been there. He knows how to get us back." Haynie farms near Reedville, Virginia, and is chairman of the board with the National Black Growers Council.

"There have been some troubling times," says Ryan Bivens, a first-generation farmer growing corn, soybeans and wheat near Hodgenville, Kentucky. "We knew we were going to take a hit," he says, referring to results of the U.S.-China trade dispute. The Market Facilitation Program (MFP) helped offset some of that trade-related damage. Bivens is sticking with Trump. "Biden/Harris just scare me," he says. "[Kamala] Harris is from California, and she's pretty uneducated about modern agriculture. Trump does stand up for us. He has very much proved he is supportive of agriculture."

Respondents also tell DTN/Progressive Farmer/Zogby that Trump's focus on agriculture has improved their farming and ranching financial outlook (57%), and that the 2018 Farm Bill has provided an adequate safety net for their operation (57%).

"The payments from Trump were better than nothing. But, I'd rather sell my crops on the market for a decent price," says Angelo Erickson, Tarkio, Missouri. Erickson grows soybeans and white and yellow corn, and he considers himself a strong supporter of the president. Fifty-four percent of responding farmers say their businesses have been profitable over the past four years.

Darren Grogan has been pleasantly surprised by Trump during his first term. He believes some of the president's trade policies have not been popular in the world of agriculture, but Grogan gives Trump the political space to negotiate. "We have to start somewhere. We have gone through some pain. But, if no one is willing to feel it, [trade disputes] will never get resolved," he says. Grogan produces corn, soybeans and wheat at Arlington, Kentucky.

COVID-19 has had an outsized impact on rural counties and farming voters. Large numbers of farmers tell DTN/Progressive Farmer/Zogby the pandemic has impacted their ability to interact with family, friends and neighbors (55%), negatively affected grain and livestock prices (48%), affected their families (43%) and made it more difficult to obtain parts, services and inputs (41%). Roughly a quarter of surveyed farmers say the COVID-19 outbreak has impacted their ability to earn off-farm income (28%) and has made it more difficult to find and retain employees (27%), to work because children are not in school or sports (26%) and to transport grain and livestock (25%).

In this year of COVID-19, China, the lockdown recession, Black Lives Matter, Defund the Police, ANTIFA, Storm Troopers, "peaceful demonstrations," riots and looting and, of late, a highly prized Supreme Court seat available after the death of 87-year-old Ruth Bader Ginsburg, agriculture plows its way back onto the national political scene. It also held a place of importance in 2016.

While the rural vote per square mile can be small, it is significant in building an electoral college majority. It is in the rural states such as Iowa and Wisconsin that the seeds to Trump's electoral victory are found.

"We can survive in this economy," Grogan says. "But, we could thrive if the economy was better."

"My concern is domestic consumption," says Jeff Wuebker, a large producer of pork from Versailles, Ohio, and supporter of President Trump. "Restaurants are closed or have limited capacity. Consumers [of pork] are unfamiliar with cooking pork at home." Sixty percent of domestic demand for pork is from restaurants, hotels, schools and nursing homes. "When that is diminished, that makes me real concerned. We need to get the economy back in gear to get through this coronavirus."

Editor's Note: Numbers in polls may not add up to 100 because of rounding. 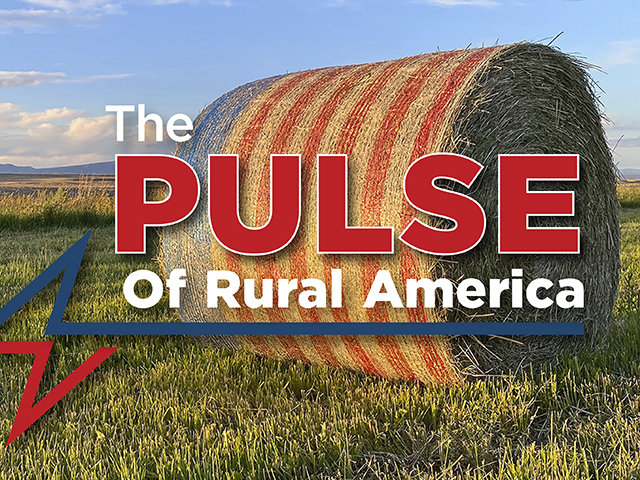