Bison are grazing the Kankakee Sands area of northwestern Indiana again for the first time in nearly 200 years. The growing herd is part of The Nature Conservancy's 8,400-acre Efroymson Restoration project and straddles U.S. 41 about 50 miles south of the southern tip of Lake Michigan.

When the Indiana Chapter of The Nature Conservancy (TNC) acquired the property in 1996, it linked the nearby Willow Slough Fish and Wildlife Area, Beaver Lake Nature Preserve and TNC's Conrad Savanna Nature Preserve into a single protected environmental area. The resulting 20,000-acre reserve features dry, mesic and wet sand prairies, sand blows, sedge meadows, wetlands and black oak savannas in a region of northwest Indiana that was home to the Grand Kankakee Marsh and the long-since drained Beaver Lake.

The natural shallow lake, which once stretched 7 miles and was 5 miles wide before it was drained for agriculture, was a key feature of an area known as the Everglades of the North.

Trevor Edmonson, the Kankakee Sands project manager, says the bison draw a lot of attention to the restoration project but notes they aren't the reason for all the activity at the site.

"We brought in the bison to add some natural disturbance that was missing from our prairies and something we could not replicate as managers," he explains. "Our goal is to steadily restore the Kankakee Sands unit to a thriving native prairie habitat with up to 600 original plant species that once were found here."

BISON AS A TOOL

"While the bison are very popular with tourists and provide excellent public relations contacts for us, they are an ecological tool in our management plans," Edmonson says. "By their nature, they behave differently than cattle and forage a little more selectively, and that's why we have them in our restoration tool kit."

Kankakee Sands is home to more than 240 bird species, including rare Henslow's sparrows, northern harriers and least bitterns. The project also features 70 species of butterflies and 1,000 species of moths, as well as thriving populations of dragonflies, bees, frogs, lizards, snakes and badgers.

Bison existed in this area through the 1700s and into the 19th century. Written history indicates the last bison was killed in 1830. Twenty-three bison from South Dakota's Lame Johnny Ranch and the Wind Cave National Park herd (both known for genetic purity) were established here on 1,100 acres in 2016. Their numbers have grown to 90 with 20 calves born this spring.

"We are permitted for 85 animal units, which means we could have up to about 100 bison of varying sizes and maturity before we have to reduce our numbers," Edmonson explains. "Our priority is to support other Wind Cave herds in the West with animals if they need them. In the future, there could be some opportunities for TNC to partner with indigenous tribes who are developing their own herds. We may also work with local meat producers. Likely, we will do a mixed approach."

The bison's 1,100-acre home is divided into a 700-acre southern pasture and a 400-acre northern enclosure that are on a three-year controlled burn schedule to mimic wildfires. Fires release nutrients and stimulate growth. Many forbs require fire for seed germination.

"Essentially, we have a system of patch-burn grazing as the bison tend to prefer grazing freshly burned patches," Edmonson says. "The rest of the year, it's pretty much 'hands-off' on management for the bison. We have a spring and fall burn season depending on where their unit is in the burn schedule. Otherwise, we just watch them, assess their pasture's forage condition and do an annual roundup to complete exact counts and take care of state-mandated vaccinations."

Since 2016, the bison have made noticeable differences in the number of tallgrass species originally planted in the early stages of the renovation. They have sought out and thinned acres of equisetum, a so-called "living fossil" of the dinosaur age whose upright reed-like stalks thrive in the wet, light soils of the Kankakee Sands.

"The bison are doing their job," Edmonson explains. "When we first started the Efroymson Restoration, we planted what turned out to be an excess of tallgrass species like big bluestem, switchgrass and indiangrass. We prefer a balance of tall grasses with short grasses like little bluestem and prairie dropseed in a larger matrix of diverse forbs and sedges."

"The bison are helping bring those areas back into a 60/40 mix of forbs and other low-growing species in relationship to the tall grasses," he says. "Diet analysis shows they also will eat reed canarygrass, a particularly aggressive invasive competitor, and we hope grazing of this species will help with its management long term."

Also, willows are invasive to the native prairie project, and bison eat them all year long.

"We plan to continue using the bison along with small herds of cattle managed with patch-burn grazing on certain units across our site," Edmonson continues. "We can be more flexible with the management of our cattle than the wild bison."

TNC is still bringing sections of the property out of corn and soybean production. In 1996, the entire project was in row-crop production after being broken out of a pasture grazing scenario in the 1970s. The project continues to lease certain areas to local farmers to help pay bills for seed purchases and to continue weed-control efforts on those acres.

While not production agriculture, the Kankakee Sands restoration project operates on the scale of large farms and uses some of the same tools, Edmonson says. "We hire local ag service businesses at planting and use their high-flotation spreader vehicles to broadcast our seed mixes," he explains. "That process involves mixing the light seed of various native prairie species with potash or lime pellets as a carrier to provide even distribution."

TNC seeks to source diverse prairie plant species from as close to the northern Indiana site as possible to ensure selected species are well adapted locally. "We look within remnant areas of our own property that still contain species of a surviving native seed bank. Also, there are other sites within 50 miles we favor to fill our requirements to establish at least 600 species known to be native to the area," he explains. "This is important for us and to landowners wishing to establish native prairie on existing CRP [Conservation Reserve Program] ground or other areas," he adds. "The closer to one's own geographical area plant genetic material can be sourced, the more likely those plants will thrive. This is very important when trying to establish native plants on marginal land.

"If you plant little bluestem collected in Oklahoma on our soils, it will likely grow, but that genotype is going to react a bit differently than a native of our area," Edmonson explains. "It may be only a few weeks different in temperature or sunlight intensity, but there will be a difference, and that makes a good argument for sourcing locally.

He says farmers and ranchers can benefit in many ways from native prairie plantings, but he emphasizes patience. "A lot of these species are finicky, and we may not see them for seven or even 12 years." 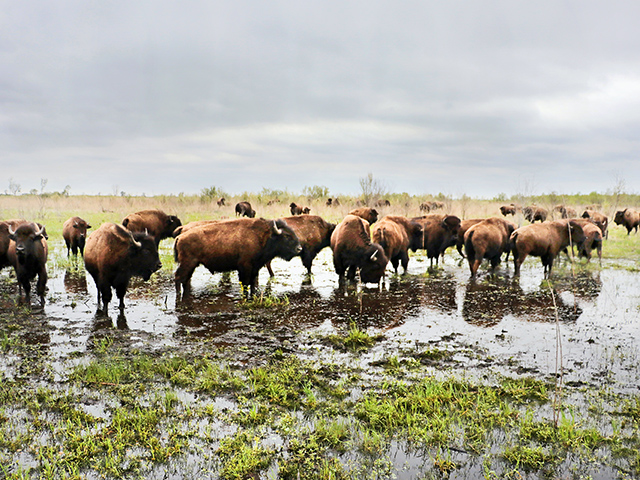