In 2001, Lynn Hix had his 4-year-old son, Vince, in tow while he was doing construction work at a north-Georgia poultry farm. A few chicks escaped, and the farm owner told Vince he could have them if he could catch them. As Lynn recalls, "Only one of them lived, but Vince made a pet out of it and pulled it around in a little red wagon."

Lynn may have enjoyed raising that chicken a little more than he'll admit, because it wasn't long before he added 25 Rhode Island Reds to the farm. He and Vince raised them and carried their eggs to church to sell. The egg money went into feed -- and more chickens.

A pivotal moment followed. Lynn and wife, Tonya, told Vince he could have as many chickens as he wanted, as long as he paid for them and the feed. Lynn laughs, "I think we created a monster."

Vince isn't a little boy anymore: He's now a 23-year-old avian biologist, still as excited to talk about chickens as when he was 4. As he walks the paths between hundreds of pens in his parent's rural Georgia backyard, he rattles off the names and classifications of an overwhelming array of exotic birds.

"There are only three or four nesting pairs of black curassows in the country, and I've got one of them. They're from South America," he says proudly. "I've got birds from every continent except Antarctica."

Hix estimates he has around a thousand birds today, almost all of them exotics found in the wild.

"I don't do any mutations and hybrids. In captivity, a lot of people select for colors. I only breed the wild type and keep them pure. I may not ever send any back to the wild, but I like to think I'm helping in case they go extinct."

Hix is a University of Georgia (UGA) graduate with a degree in avian biology. He's been so successful at breeding and raising these unique birds that even well-known zoos loan him pairs when they are having trouble getting them to reproduce. In return, he'll keep a young one or two.

"He's willing to experiment," says his mentor, teacher and part-time employer, UGA poultry scientist Adam Davis. "He's impatient in a good way. If he goes a season and doesn't have a hatch, he's going to try something different. When something isn't working, I'll tell him to find out what the birds eat in the wild and try to reproduce that."

Hix's success has opened doors in the exotic bird world, which tends to be made up of individuals much older than him.

Davis says it's partly because, "[Hix] shares what he's learned, then they become more successful, as well. It also helps that he's friendly and outgoing."

Hix says he has friends all over the world who share his passion. Mostly, they communicate by phone and e-mail, but he recently went to Costa Rica to see birds in their native habitat with Davis.

"I travel a lot," Hix says. "I just got back from Miami. I've been there twice this month." He's driven as far north as Pennsylvania and west to Texas on bird-trading trips.

That's a giant step from the little fellow who would beg rides to area poultry auctions and buy chickens for a dollar. Now, he doesn't bat an eye at paying $2,000 for a nesting pair of rare birds, and he has his sight set on the Victoria crowned pigeon.

Price isn't the only big-ticket item when it comes to the exotics. Hix says the bill for wild-game feed alone is $200 a week. That doesn't count boiled eggs, mealy worms he raises himself, dog food and peanuts and parrot feed he orders online. He also buys fresh fruit for many of the birds straight off the display rack. He doesn't even try to get waste produce.

"I'm not going to feed a rotten banana to turacos worth a couple of thousand dollars," he says.

Surprisingly, the electric bill isn't sky-high, even though most of the birds are in open-air pens.

"I haven't turned on a heat lamp in three years. Everybody thinks a parrot can't live outside here. You just have to acclimate them. I have more trouble bringing cold-weather birds here than hot-weather birds, but my pens are in areas of natural overgrowth, so they can get in the shade."

He also relies on ingenuity more than high-tech methods in the actual breeding and hatching of the exotics. It could be as simple as making a nonbreeding male jealous by putting another male of the same species in the next pen.

"You can't do anything better than nature," he insists. "I've used artificial insemination (AI) on a couple of birds, but you don't want to AI if you can help it. These birds are wild, and it puts a lot of stress on them to catch them."

Hix depends on Old English Game hens to hatch eggs rather than incubators.

"They don't have a plug-in," he says, adding, "I've raised them for generations, and I cull them if they won't sit. I've got some that will sit for six or seven months."

Whatever he saves on mechanical incubators he likely spends on birds and pen improvements. "I like the pens to be big. I can't stand seeing birds in small pens."

He also tries to predator-proof pens with metal down into the ground to 1.5 feet, including under the doors. "I didn't have metal under a door, and a skunk got in and killed 10 birds in a row."

This passion for birds represents a hefty time investment. Hix spends four hours a day feeding and watering, although it is a chore he doesn't mind. "If you don't enjoy it, you're not going to have many birds."

The only part of raising birds he doesn't enjoy is selling the babies. "I guess I'm a hoarder. I want to keep all of them."

His father takes it all in stride, including the fact that their backyard has been turned into some kind of bird paradise.

"It is an ever-expanding operation," he says. "We're very proud of Vince. He probably knows as much about birds as anybody you'll ever meet."

As passionate as he is about his birds, though, Hix doesn't plan on making a living from them. "One tornado can take all you've got, or you could buy a bird for $20,000, and it could get hurt the next day."

So, he's pursuing his master's degree in poultry science with a concentration in nutrition and physiology. Medical school is also in the back of his mind, particularly cancer research.

One thing he is sure of, though: "I want to make enough money to buy more birds." 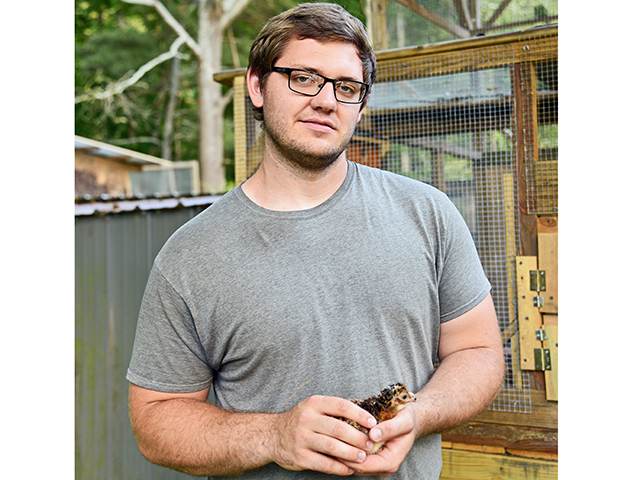