The world's fastest tractor comes equipped with a parachute, which only makes sense when you try to think of a way to slow 5 tons of iron and innovation accelerated to more than 130 mph. British manufacturer JCB built a pair of concept tractors to test the outer limits of tractor speed, and late last autumn, the company shattered the world tractor speed record, setting it to 135.91 mph.

It was a massive feat of engineering, but even JCB will admit it was more experiment than revolution. Tractors and combines aren't about to start rocketing across the American heartland at more than 100 mph. But, JCB's fastest production tractors have long rolled at faster than 40 mph, and other manufactures have a keen eye on transport speeds, as well.

As farmers continue to find efficiency in expanding their ground, their farthest fields getting ever more distant from the shed, speed on the road starts to become a factor.

Transport speed didn't make much of a difference when every field may have been within five miles of a grower's farmstead, but farm consolidation and the search for efficiencies have some farmers taking on land more than 100 miles away. Suddenly, the gains possible on the road aren't figured in minutes but hours.

Terry Griffin, associate professor at Kansas State University's Department of Agricultural Economics, compared that lost time to a parable he tells of a farmer's $1,000 lunch.

Corn planting is going so well on, say April 30, the farmer decides to take the crew into town for lunch, a two-hour break. Then come spring storms, breakdowns and other delays. The final rows of corn don't hit dirt until June 1.

All the corn couldn't have been planted in that prime April window, but there were two hours planted June 1 that could have been. Griffin estimates the resulting April versus June loss of yield could amount to about $1,000.

"It's not downtime in a field you could eliminate but downtime between fields," he says.

The moral of the story: There's no insignificant amount of time when the planting window is open.

JCB got in the fast lane in the early 1990s with its Fastrac line of tractors. They initially topped out around 35 mph, but refinements in the design, braking and tire technology, and a better braking system allowed the speed to push above 50 mph. The speed has always made a little more sense in the company's native United Kingdom, where the machines are generally pulling smaller implements down paved roads.

But, Gateley says as the average size of the American farm grows -- the midpoint average for major field crops more than tripling from 1987 to 2017 -- so does stateside interest in JCB's tractors.

"The speed is one of our biggest selling features," Gateley explains. "The cost of trucking these days has increased, so the ability to drive down the road at high speeds when you're doing major mileage really gives you a chance to make your business more efficient."

The company built the two concept tractors to show off its speed prowess and allow engineers to test the limits for future projects, then set up for testing at a World War II-era Royal Air Force Bomber Command base. The tractors used more than 50% stock parts, including the cab and chassis. Axles and the turbocharged engine were heavily modified. (The drogue parachute also doesn't come standard.)

Speed has become more of a factor for all manufacturers, something considered from the ground up in design, says John Deere factory marketing manager Doug Felter. Still, he says, there are many reasons equipment can only travel so fast. One big one: Maybe the tractor is fast, but implements are often limited to 20 mph. John Deere's track machines max out at 26 mph as weight and speed can build heat and damage the tracks.

Many Deere tractors come with a high-speed package, 31 mph, as an option and are meant for tasks such as hauling manure. High-speed versions of Deere's 6, 7 and 8 Series tractors come with front fenders, suspended front axles and trailer brakes. Some require front-axle brakes, and all require B speed-rated tires.

"We do consider top road speed in design," Felter says, " ... but there are trade-offs and situations where higher road speed is not desired or beneficial, so we do maintain more 'conventional' speeds, as well."

There's just as much attention, Felter says, in bumping up the speed in the field. "We have recently spent time focusing on higher infield speeds to enable productivity for those applications," he says. "We now see several implements capable of 10 mph or more.

"And, going 10 mph in a field doesn't even require a parachute to stop. 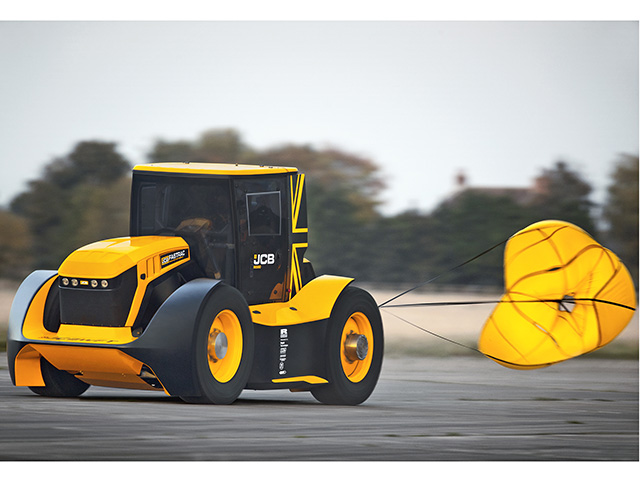