Tyler Strom is on a mission. He holds two different jobs tied to one occupational goal: to create a sustainable, resilient food-production system for the future.

"It is hard to be a farmer today, especially after the weather we've experienced in 2019," says the fourth-generation producer, whose farm is in Kane County, Illinois, near Chicago. "I utilize off-farm income to maintain my farm livelihood, my obsession. I enjoy providing quality food, connecting with consumers and meeting others across the supply chain who build consumer-focused production systems. Greater than at any point in my lifetime, consumers are driving change in agriculture. We must meet their demands to know more about their food to survive."

Strom has found a farming niche raising vegetable crops for northern-Illinois markets. He also serves as managing director for the Illinois Agri-Food Alliance (www.ilagrifood.org), a nonprofit organization that brings leaders together to develop strategy for the state's ag and food-production system.

Strom's love of agriculture is lifelong and runs deep. He grew up on a corn, soybean and sweet corn farm adjacent to the one he owns now.

"The farm helped put me through college. I always felt very connected to the work ethos of agriculture, and that propelled me to study agricultural business and international ag economics at Iowa State University," he says. "Then, I wanted to advance my education and specifically get exposure to global issues around climate change, sustainability and agroecology."

Strom went to Sweden to earn his master's degree in environmental studies and sustainable science, which was an emerging field of study in 2010. Today, he says several universities in the U.S. and other countries have added the field as a formal discipline.

"It was a transformative time, as I explored beyond production agriculture and tied farming to the economic, social and environmental aspects of sustainability," he says. "My thesis looked holistically at local and regional food economies, and how they contribute to communities."

Later, as a fellow of global agriculture and food at The Chicago Council on Global Affairs, Strom was able to further his insights. He worked in Germany as a McCloy Fellow and researched the various roles Germany's academic, policy and private institutions play in climate change and food-security issues, and in developing sound, sustainable agricultural policies.

From the council, Strom joined Illinois Agri-Food Alliance. "The idea was born from a vision for enhancing the Illinois agriculture and food system that originated at The Chicago Community Trust about five years ago. About 200 stakeholders looked at issues that would advance the state's ag and food economy, contribute to societal health and protect the environment," Strom explains.

The resulting road map contains strategic recommendations for how Illinois' ag and food system can improve health, contribute to the economy, preserve the environment, create jobs, use new technologies, adapt to changing climate and help underserved communities. It's used by diverse ag- and food-system players, including food and ag tech entrepreneurs. Strom hopes Illinois and the Chicago region can become a leading global hub for innovation as a result.

"As the managing director, it is my responsibility to build organization capacity and serve as a networking conduit to others in developing actionable plans," says Strom, adding the organization has a board of directors and is financed by various food and ag companies and associations.

One effort the alliance is concentrating on is workforce development. Strom led a recent meeting with food and ag officials in the Chicago area to determine how to attract a future skilled, diverse ag and food workforce. He will replicate the work in other parts of the state.

Even with his full-time position with the alliance, Strom is drawn to farming. In 2010, he started vegetable production on a small scale with land owned by his parents, Lee and Twyla Strom. He works the farm in his spare time, evenings and weekends.

"Connecting with customers in my community drives my farming style. Consumers want access to information and are conscious about where they get their food," he says.

Strom experimented with more than 100 vegetables and now concentrates on select sweet corn varieties, tomatoes, cucumbers, eggplant, peppers and leafy greens. He sells honey from his apiary and has a farmers' market stand with a local meat supplier.

He's planning a future on-farm market and to partner with local businesses. And, he is expanding. Strom obtained funding from the Natural Resources Conservation Service Environmental Quality Incentives Program to build a 34- x 72-foot-high tunnel -- a controlled, protected growing environment. He can produce about 150 cucumber plants, 50 pepper plants, 50 eggplants and 250 tomato plants in the high tunnel. He plans to add another tunnel soon.

"High tunnels give us potential for 3 1/2 crop seasons. That not only extends my production, it provides for longer-term marketing engagement with customers," he says. "Instead of April to October, I can begin in late February and go to early November with tomatoes, peppers and cucumbers. In the cold months, I can grow root vegetables and leafy greens."

Strom says the nearly 5-acre farm is profitable. "Since I am a small-scale producer, equipment and investment is much smaller than if I was growing corn and soybeans, so I am able to do this," he says. "The high tunnel is a bigger capital expenditure, but I anticipate a three- to five-year payoff."

Strom is optimistic as he looks to the future of his farm and Illinois Agri-Food Alliance. "Changes in ag and food production are happening quickly. New technology, consumer behavior and attitudes, and evolving practices influence business in unprecedented ways," he says. "Illinois has a world-class production environment and infrastructure, and the business and research capacity to advance the whole food-supply chain system. We need to embrace that for success."

Ultimately, Strom believes his intertwined professions will give him the resilience needed to contribute to the future of the food-production system. "Having two roles in agriculture allows me to advance common goals and help create sustainable opportunities for the next generation," he says. 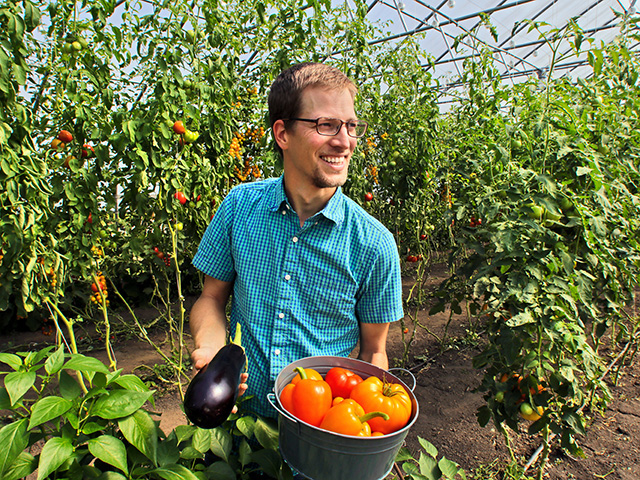