Why pay for a Lexus when a trusty Honda will get you to the same place?

Careful Western corn rootworm trapping and scouting allows Hughes to save anywhere from $50 to $75 a unit at planting time without sacrificing yield.

"We're still keeping a little corn borer protection," he says. Herbicide-tolerant traits are also a must. "Our biggest pests are weeds."

As farmers search for ways to trim costs without trimming yields, some are scrutinizing the complicated transgenic trait packages bred into corn hybrids.

It's a worthy goal, but pests don't always cooperate, scientists warn. Here's how to proceed down that road with caution.

It's been almost 25 years since transgenic corn hybrids -- Roundup Ready corn and the first Bt hybrid -- first hit the market. Since then, more than a dozen traits have joined them, all featuring herbicide tolerance or Bt proteins targeting caterpillar pests and rootworms.

Since companies often license each other's proteins and sell them under different brand names, it's increasingly tricky to know what traits your corn model sports.

You wouldn't start pulling parts out of your car at random, of course. And, you can't safely cut out corn traits unless you know what they do.

That's why Michigan State University Extension entomologist Chris DiFonzo works with Texas A&M entomologist Pat Porter to create the Handy Bt Trait Table. Updated annually, this table lists every herbicide-tolerant trait and Bt trait on the market. It also lists the herbicide or insects they target, and it breaks down every commercially available corn package into its individual traits.

Those old 1920 Ford Model Ts are a great collector's item. But, they lack airbags and seat belts designed to protect passengers of modern cars in modern traffic.

Likewise, pest pressure and corn hybrids have evolved significantly in the past 25 years. Growers need to know what's out there before they start discarding traits.

For Hughes, the European corn borer is now a rare find thanks to widespread adoption of Bt proteins that target it and provide landscape-level suppression of the pest.

But, DiFonzo is quick to point out that it isn't extinct. "It didn't go away; we just dampened populations," she cautions.

In fact, after two decades of good control, corn borer populations in parts of eastern Canada are starting to show some resistance to the Cry1F Bt protein that targets it.

So, Hughes hangs on to a corn borer trait in his hybrids. But, he's less worried about corn earworm and armyworm, which tend to be sporadic pests of field corn in his region.

That's true for many northern Midwest growers, DiFonzo notes. "We're at the end of the chain for earworm and armyworm, since they migrate up from the South each year," she says. A bad armyworm outbreak is a once-in-a-decade phenomenon, she estimates.

But, for Southern corn growers, who often see multiple generations of those pests in a season, Bt traits that target those pests, such as Vip3A, are more essential.

For example, Western corn rootworm populations have evolved some level of resistance to every Bt protein on the market that targets them. Only one, Cry34/35Ab1 (Herculex RW), still provides reliable control in the Corn Belt, but it's 15 years old. As the underpinning of many pyramided rootworm hybrids, it also has a lot of exposure to rootworm populations.

Knowing the resistance profile of your local insects is key to making sure you can safely drop Bt corn traits -- and making sure the ones you pick still work.

Fortunately, the Handy Bt Table (see For More Information below) includes a column showing which pests have developed resistance to traits on the market, DiFonzo says. Review it and chat with Extension agents before adjusting your trait packages.

4 HAVE A MANAGEMENT PLAN:

Now comes the dirty work, Hughes says: "Without some of these traits, you're back to traditional scouting."

Scouting for corn borer is very different from scouting for armyworm or Western bean cutworm, so growers will need to brush up on the recommendations and become acquainted with local moth-trapping networks.

"If you decide to drop some traits, you have to understand that you need to educate yourself on trapping and scouting, or hire someone to do it for you," DiFonzo explains.

That's what Matt Montgomery, a Pioneer agronomist in west-central Illinois, spends many hours of summer doing. Like Hughes, some of his customers opt for corn hybrids without rootworm traits.

"We do a lot of trapping on rotated soybean ground to see if there is any buildup of rootworm populations that would require them to use rootworm traits the next year," Montgomery explains. That means setting up yellow sticky traps throughout soybean fields in the summer and doing the legwork to check them for adult rootworm beetles each week.

Hughes also taps into local sticky-trap networks maintained by his seed companies and local university scientists, and he hedges his bets with soil insecticide some years.

Finally, have a plan if an infestation does occur, DiFonzo says. "If you're going to need a high-clearance sprayer late in the year to go across your corn field, do you know who you can go to for that?" she asks. "You have to game it out." 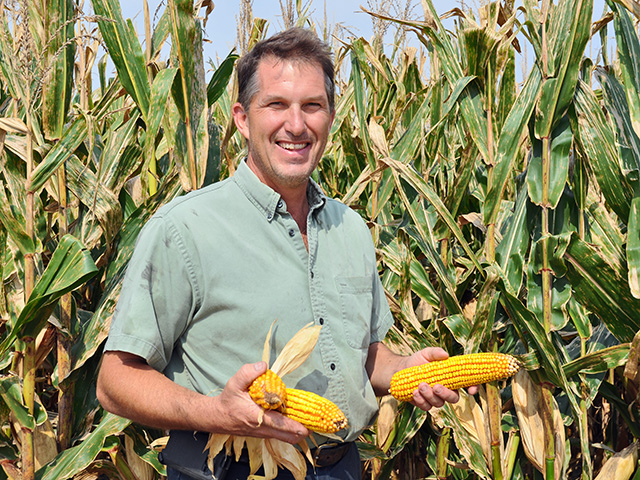