When Karen Eifert Jones had to complete online training to spray dicamba herbicide this spring, she ended up doing it on her cell phone from the driveway of her 87-year-old mother's house. It was the only way she could get access to the internet.

Eifert Jones farms with her family near Waukomis, Oklahoma. While her mother's house is only about a mile away by road, it's light-years away when it comes to internet access. The best she and her family can get is an antenna-based internet connection. With so many more people using the service in recent months, competition for bandwidth has slowed to a snail's pace.

Asked why broadband access isn't available at the farm, Eifert Jones says she figures the local phone company buried the fiber line only so far, and that was the end of it.

The last few months saw jobs shift to home offices and classroom studies move to kitchen tables. This change has been a major adjustment for workers, employers, students and teachers. And it underscores the lack of high-speed internet, or broadband, throughout many rural areas.

Stories like Eifert Jones' are fairly common to those who have had to operate without broadband. Internet in rural areas can be obtained by satellite, antenna or cell phone hot spot, but dependability and cost of these options continue to be major issues. Often, they upend families that have to make inconvenient and difficult choices.

In the case of Eifert Jones, the family had to get its college-aged son, Weston, a hardship waiver so he could stay in his dorm after the campus closed. It was the only way he could continue his studies at Oklahoma State University because of the family's internet service issues.

Her daughter, Caroline, a junior in high school, had to try schoolwork with their weak internet service, sometimes visiting her grandma's basement to turn in her work. She faced lost and late assignments because of the connection.

"She had issues right away with sending in assignments on Google Classroom and Docs," Eifert Jones says. "We learned with weaker internet signals her work didn't always go where it was supposed to."

Nebraska farmer Kenny Reinke faced similar issues with rural internet as his children had to continue their school year from home in mid-March. They are based at Neligh.

His oldest child, Tyler, was only in fifth grade, and most of his schoolwork was on paper. But, when the work required the internet, it usually brought issues. The Reinke home sits in a valley roughly 2 miles wide about 8 miles north of Neligh. Because of the terrain, their home satellite internet service is not dependable.

"We are just low enough our signal isn't very strong," Reinke says. Zoom meetings with his son's fifth-grade classmates usually required a ride to the nearest hill. They sat in the cab of the pickup to attend class. The newer pickup had its own Wi-Fi signal, so any online schoolwork usually meant a ride in the truck.

Reinke is a member of the Neligh-Oakdale Public School Board of Education. He says the Nebraska Department of Education advised school districts to do the best they could once school-at-home started. They expected challenges.

While many of the district's students had access to some form of internet at home, the school set it up so its Wi-Fi signal would include the school parking lot. It was one more option. "We had the local internet provider work with our district's families to make sure kids could get their schoolwork done," Reinke says.

Farmer Michelle Jones, of Broadview, Montana, says her local phone company provided her broadband internet two years ago. Before this, the only way her family could get decent internet from home was through a hot spot device.

"It worked good sometimes, but other times, it certainly did not," Jones says.

Another issue with rural broadband is cost. Jones pays $140 per month for 50 megabits per second (mbps) of download speed. Those in the nearby town of Billings receive 100 mbps and pay roughly $50 per month.

Still, Jones says she is grateful to her local phone company, Triangle Communications, for investing in rural broadband in her region. She notes federal grants are really the only way small rural phone companies can run the fiber cables in rural areas for broadband and expect a return on their investment.

Jones is part of a Federal Communications Commission advisory committee. The subcommittee she works on, Adoption and Jobs Working Group, addresses why farmers aren't adopting precision agriculture technologies in some areas.

"Among the things we will be looking at is the lack of high-speed internet in rural areas," she says, noting this could play a definite role in the speed with which new technology can be adopted.

Oklahoma's Eifert Jones says one positive that could come out of the COVID-19 pandemic is an increased awareness of rural Americans' struggles with internet access.

The need for people to work and learn from their homes has opened the eyes of many in leadership to just how bad rural internet is and how critical it is to fix it.

Eifert Jones says she is hopeful more investment in rural internet will be made now knowing how many people could be working or educating their children from home in the future.

As I wrote this story about children doing schoolwork from home during the Covid-19 pandemic, it was an issue I was living personally.

We have a farm about 35 miles northwest of Omaha, but it has no access to broadband internet. We use a hot spot device from our cell phone provider. If you've ever used one of these, you know some days you have great access, other days not so much. For some reason, windy days are the worst.

March 16 was the first day my three kids began their homeschooling adventure. For the younger two -- Burke, a fifth grader, and Ella, a third grader -- most schoolwork was still on paper. Once in a while, there was a Zoom meeting or a video to watch online. But, our high school freshman, Kyle, was doing all of his work online. That's when our rural internet issues really hit home.

We started getting calls saying Kyle was missing assignments. He swore he was doing the work. Seems on days our hot spot signal was weak, his assignments weren't making it to the Google Classroom or into Docs.

Where there's a will there's usually a way. We started to go to the top of a hill where the signal was stronger each time Kyle needed to turn in an assignment. He also plays tuba in the school band, so when he had to record audio files to send to his band teacher, he did it from the tailgate of the pickup.

Our school year ended on May 21. We are all looking forward to the summer. We have two things we hope happen between now and the fall: 1) the kids can go back to school, and 2) that the fiber optic wire buried in the roadside ditch last year will make it the rest of the way to our farmhouse. 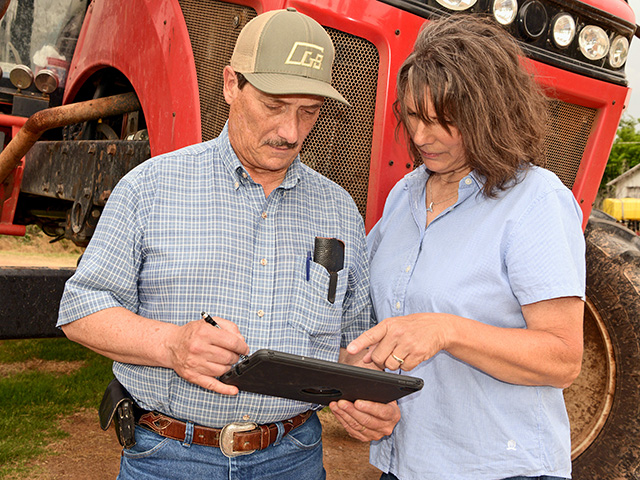