For Billy Helton, the aha moment came as he looked at a small, tall, unused stand of bermudagrass behind his hay barn in the summer of 2017. "I had cows on one side of the fence and the grass on the other, and the difference was unbelievable," the Georgia beef producer recalls. "It was the same soil and the same grass crop. With no cows, the grass was knee-deep and was home to roly-polies (pill bugs) and spiders, and the soil was wet and cool," he explains.

"Right across the fence, the ground was dry, hard-packed and looked like the Arizona desert. I thought, 'There's got to be something to this ...' because everything is the same except how the land is being managed."

The grass-patch incident convinced Helton he had to change his management or get out of the business, because what he'd been doing for years was taking up a lot of his time and effort, and wasn't working.

Helton operates Wild Bill's Cattle Co., near Warthen in Washington County, in east-central Georgia. The thriving business is made up of a 150-head Brangus cow/calf operation along with a commercial grazing component. The ranch is based on 445 acres evenly divided between Tifton 85 bermudagrass pastures and summer and winter no-till cover crops, with about 100 irrigated acres.

"Like many others in our area, we were supplementing our grass pastures with summer millet and winter ryegrass in the traditional way," Helton explains. "We were harrowing, chiseling and harrowing again. The moisture had to be just right to plant, and sometimes we'd have to run the pivots," he says. The soil was always either too hard or too slick. He constantly fought clods in the fields. It was an expensive battle.

"I had to have a big tractor and a plow to farm like that. By fall and winter, everything would be eaten up as we waited on the ryegrass to come on, and the cows would eat that before it ever made a stand. I was hauling hay every day," Helton says.

The cows always had more than they needed in the summer, but the rest of the year, the pastures looked like carpet," he explains. "I could never sell enough calves to pay the bills. I just couldn't make it work."

Meanwhile, Helton had been doing some homework with videos from Greg and Jan Judy's Green Pasture Farm, in Missouri. The couple practices management-intensive grazing (MIG) on 16 farms northwest of Columbia and produces educational videos about their practices. "Watching what they had done was opening my eyes," Helton says.

Helton's first step into the MIG practices he uses today included a single electric Polywire run across a 15-acre paddock to segment about 5 acres. Helton let his cows take half the grass and then moved the string. Even though there was still grass where they were grazing, they'd immediately move to the fresh grass.

"I wasn't using a back string, so after five to six days, the cattle would migrate back to the original paddock as it tillered new growth," he says. Helton followed that practice until the end of the first summer.

"I had way more grass than I'd ever had. I was able to start stockpiling forage into the fall," he says. "I realized instead of paying someone to cut the excess and spend time hauling it in and out of the barn through the winter, I could let the cows graze the dormant forage. I cut my tractor time haying, reduced fuel use and allowed me more time into the winter before I had to start putting out hay."

Unrolling hay strategically across his pastures also helped eliminate most mud problems during wet weather and allowed Helton to better track its consumption.

"I kept up those practices and started calculating acres in my fields and pastures, and worked to even out the size of my paddocks," he explains. That grouped the cows in a way to better use the standing grass -- to use the herd as the harvesting "tool" instead of machinery. "Based on hay optimization studies, I'm now running the cows on a 21- to 25-day cycle through the pastures and letting them do what a hay baler does," he says.

PADDOCKS DO THE WORK

Today, Helton's operation features 35 permanent paddocks, 16 of which can be halved or quartered, depending upon growing and grazing conditions.

His cattle are never more than 500 feet from a watering point. He worked with Natural Resources Conservation Service to install a set of permanent and temporary water troughs fed by underground PVC piping. "I can have water in every paddock, close to the cattle, so they don't all crowd around a water tank in a bunch," Helton says. With ample water close by, they tend to drink in groups of five to six and spend less time there tearing up the soil.

Because of his improved use of available forage, Helton was able to add a commercial grazing venture into his income stream in addition to his own cow/calf operation. All grazing follows MIG practices for maximum gain and positive soil benefits.

About twice a year, Helton can take in 160 stockers for about 90 days. "I contract grazing on gain with a local producer who is marketing grass-fed, all-natural beef," he says. "I still have my own 150 cows, and I'm using them to slowly expand my grass pastures by turning them out on newly cleared land." Helton has converted 50 acres this way, and he is working on another 40 acres. "It will allow me to take in bigger custom-grazing contracts or get enough cows of my own to be able to sell uniform calf lots."

Half of Helton's operation remains in no-till management and is tended with a 10-foot Sunflower NT drill set on 7.5-inch rows. "I usually use a five- to seven-way blend for summer forage at about 60 pounds per acre," he explains. That mix would include sunn hemp, sorghum-sudangrass, BMR millet, sunflower and buckwheat. The mix produces tall and abundant forage.

"The cattle eat it and trample the stubble back into the ground, which is helping build my soil," he says. In three years, his soil organic matter levels have risen from 1 to 1.5% to 3% on the cultivated land. For winter grazing, Helton has adopted a general mix of 50 pounds of black oats, 20 pounds of annual ryegrass, 4 pounds of vetch, 3 pounds of kale and 2 pounds of blue lupine.

"I can get this mix and brassicas planted in September for early grazing, and after the worst of winter, it carries me on into the spring. The last two years, we've gotten through Thanksgiving on stockpiled forage before having to start putting out hay," he explains.

Helton says the improvement in forage utilization points out the need to better organize his calving schedule.

"Grazing stockpiled forage in the winter provides the least nutrients of the year, and that's when the cows need to be dry. I calve December to February, so the pairs are grazing by late February or March on the tail end of my winter mix," he explains. "I'll have my grass pastures overseeded with ryegrass and clover, so I can start moving cows onto summer pasture as soon as possible.

"I've held back fall pairs and have sold off those who calved late this year, so next calving season will be three months or less."

Helton will need several seasons to know for sure if his management turnaround is going to keep him in the beef business, but he points to a number of benefits that show him "light" at the end of the tunnel.

"Our changes have saved me time and fuel, equipment costs and boosted my usable resources significantly," he says. "My cattle are in better body condition throughout the year, I use less fertilizer on the farm, I've had an infusion of cash through the grazing contracts -- which paid for my own herds' annual grazing -- and I still have leftover forage." 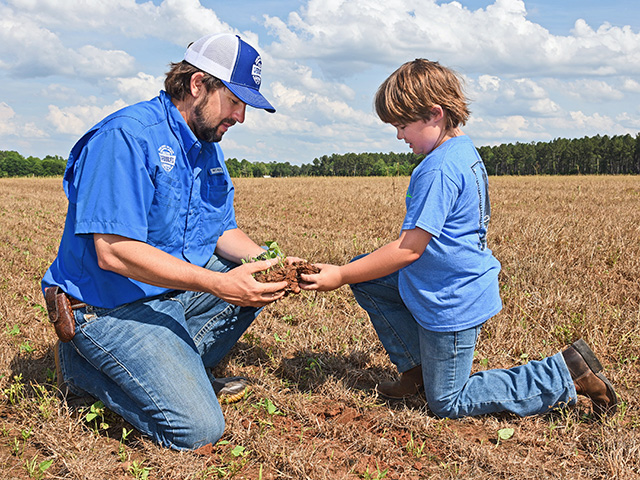