By any reasonable measure, the path for mainstream autonomous agriculture equipment will be a winding one. But, for a handful of companies, big ideas and carefully monitored tests have been giving way to a big step down that path -- commercial availability.

Raven Applied Technology, for one, is leveraging a pair of purchases made last autumn into a big step in that direction. Those moves now have the company broaching the commercial barrier.

One of those acquisitions, DOT Technology, produced the Dot Power Platform, a diesel-powered autonomous machine that looks more like the lunar rover than a tractor. It's already available in select regions.

Smart Ag, an Ames, Iowa, startup, meanwhile had been focused on an aftermarket kit capable of turning a tractor autonomous for pulling a grain wagon from the combine to the truck. Raven plans to introduce that technology for sale ahead of this fall's harvest.

"I've been working on this since Day 1, so seeing it come from that, from nothing to now, where it's a product people can go out and buy, that's pretty exciting," says Colin Hurd, Smart Ag founder who stayed on with Raven after the deal.

Going commercial with a project isn't as direct a decision for cutting-edge ag companies as it may be for Apple when it's deciding on rolling out the newest iPhone, where it's expected to have thousands in stores awaiting customers on launch day.

EarthSense, co-founded by Girish Chowdhary, an assistant professor of agricultural and biological engineering at the University of Illinois, introduced its autonomous ag robot, TerraSentia, in 2017.

The company made its first commercial sale a year later, sold 30 in 2019 and is producing 100 this year.

TerraSentia is a small, wheeled machine about the size of a French bulldog that rolls between corn rows and under the canopy using sensors to collect data on plant health.

That first machine in 2018 was a lot closer to a beta test model than the newest iPhone usually is.

"It's a huge responsibility when you sell a product, but there really isn't any other way," Chowdhary says. "We're walking in the valley of death in this market. We have to make our case on a shoestring budget. You have to get it out there and put it in the hands of people. So far, we've seen a huge amount of interest in our robots from farmers."

Now, the company is trying to ride that boost to both refine the product it has and introduce more.

"They're waiting for the weeding robots we're making," Chowdhary says. "We're trying to launch those for next year."

At Raven, the introduction of product is equally paced. DOT was introduced in western Canada with three implement options, a sprayer, a seeder and a spreader, with more planned to be ready in the next 18 months.

The company has built AutoCart dealers from coast to coast in the United States. It hopes to have more than 100 kits on farms this fall, selling them for $55,000 with an additional $3,000 annual subscription.

The equipment fits with John Deere 8R tractors, but there are plans for that to change soon, too, and there's a hope to get the technology included as an original equipment manufacturer (OEM) option from the factory. That's only the start.

"Eventually, the farmer will be able to do other things, potentially spraying, tillage or planting," Hurd says.

That, of course, is all still in the realm of ideas, concepts and tests, like so much of autonomous ag machinery, with a few exceptions.

"We've stepped off the bank, and we're in the river now. We have products we're selling this year that we believe have compelling value proposition," says Wade Robey, executive director of Raven Autonomy. "We believe the tipping point has happened. This is going to go very rapidly." 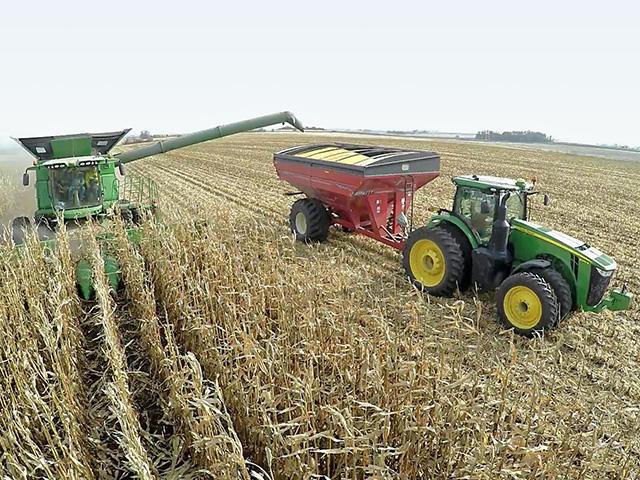