Fifteen years ago, Emry Birdwell and Deborah Clark bought a 14,000-acre ranch that had lost much of its native grass to overgrazing. They estimate about a quarter of its surface was exposed.

The husband-and-wife team set out to blanket the bare earth with native grasses that thrived when buffalo herds roamed the prairie. Now, about 95% of their land is covered with little bluestem, indiangrass, switchgrass and eastern gamagrass. Their Birdwell and Clark Ranch, of Henrietta, Texas, annually turns out more than twice the county average of beef per acre, or 100 to 120 pounds compared with the average 40 or 50, Birdwell says. Their business is cattle, but it doesn't start there.

They attacked that bare earth by mimicking movements of the bison with their own megasized herd of stocker cattle -- now averaging about 5,000 head moving in a single herd -- guided by fencing and crossfencing.

Superstocking with cattle was no small gamble in northwest Texas, where the next drought is always perched like the Grim Reaper, waiting to swoop down and claim grass, water and profits.

"Allan Savory was the beginning of all this," Birdwell says. "A neighbor and friend went to the Savory (grazing) school then came home and told me about it. The story was then, as it is now, that you could double and sometimes triple your stocking rate if you stayed with it long enough in the right way."

Savory, a native of Zimbabwe who has lived in America for decades, was and is controversial. Savory developed a method for planning livestock grazing that enabled pastoralists to simulate the effects wild herds once produced on the land. But, more than grazing, management had to change in order to transform landscapes. The idea of "holistic management" arose from that insight.

"As far as rotational grazing goes, NRCS [Natural Resources Conservation Service] and other government agencies have come late to the party," Birdwell says. "When I started, they weren't really very supportive. To their credit, they've figured it out, and now we're working together to help everybody understand this."

Upon hearing Savory, Birdwell jumped in with both feet, a nearly ruinous error.

"We were running out of places to put cattle, and the idea that we could double what we had intrigued me," the rancher says. "It ended up nearly being my downfall, because I'm not patient. I tried to double it way too soon. You have to have the grass before you add cattle."

The ranchers intensively graze small paddocks then move cattle off and allow the grass to recover for extended periods as subsequent paddocks are grazed. They have divided the ranch into paddocks of 70 to 80 acres with electric fencing then cut those in half with polywire. They and helpers move the herd to fresh grass four to six times every day.

Their herd of stockers did not start off as a single group 15 years ago. Instead, they were rotating three separate herds, about 5,500 to 6,000 head, through the paddocks.

"In 2010, the drought started and really hit hard in 2011," Clark says. "We were running out of grass and water. Emry remembered what Savory taught: In a drought, combine the herd. We sold one herd of 1,500 head, combined the other two and have never looked back. In doing so, we lengthened the recovery period as we moved cattle around the ranch. This gives grasses that are dried up a longer time for the root structure to stay intact and try to recover."

With NRCS cost-sharing assistance, they installed three-inch water lines across the ranch, with satellite lines serving all paddocks. They tow a mobile water trough to areas in need of grazing, attracting cattle away from more heavily used spots. Two major ponds -- called stock tanks in Texas -- are the main water source.

WATER WHERE IT'S NEEDED

"Cattle do not drink out of the surface tanks," Clark says. "We fence those off. We can move the mobile water trough anywhere in a paddock where we want to have increased herd impact. This maintains a higher quality of water that they're drinking. You can imagine a hot day when all 5,000 of them would be at a single surface tank."

Fencing off the tanks lets grass grow to the water's edge, clearing the water and growing even more grass.

"We want rain to hit the land and be absorbed," Clark explains. "But, if we do have runoff, it's a lot cleaner once it goes through the grasses. That's an ongoing cycle."

Today, they've changed how stock is moved. To begin with, they would open an electrified wire gap through which cattle would pass to a fresh paddock. Now, they use PVC pipe to lift an entire single electrified strand -- one whole side of a paddock -- and cattle drift under it onto new grass. This prevents erosion at gaps.

"As these root systems have gotten deeper and the plants denser, we're holding more water and producing more grass," Birdwell says. "As we continue to do that, we'll continue to have more cattle and more pounds of beef per acre." 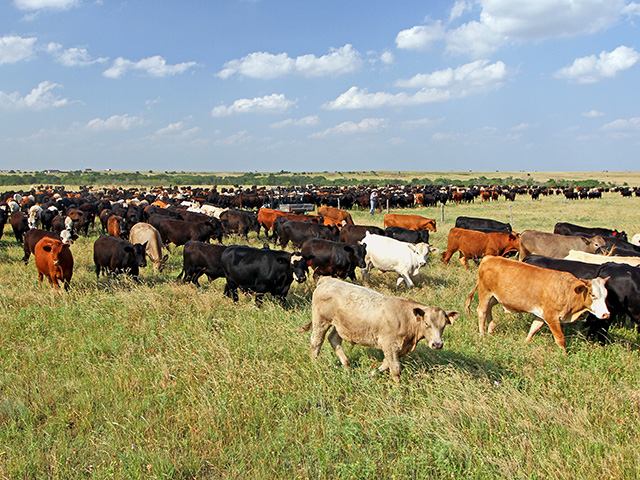