There's a sci-fi horror movie playing out beneath Gary Frost's corn fields in the Texas Panhandle.

It all started in the spring of 2017. Under the cover of nightfall, scientists sprayed water teeming with tiny, juvenile nematodes into 2 acres of dense, black soils on his northern-Texas farm.

First, they wormed their way into their favorite victims -- fat, yellow, soil-dwelling larvae of the Western corn rootworm. Once inside, the nematodes regurgitated a bacteria that poisons the larval host and dissolves its innards.

Now, it's time for the nematodes to feast. They suck up the liquefied larval guts and use the newfound energy to reproduce. Soon, up to 50,000 tiny new juveniles swarm and wiggle inside the crusted dead shell of the larval victim. At last, the corpse splits open like a croissant, and in a warm, butterlike gush of fluid, the baby nematodes are unleashed into the soil. Some will hunt more prey immediately. Others will lie dormant for one to three years before waking up and restarting the ghoulish process.

Before you run screaming in terror, meet the mad scientist behind these soil invaders: Elson Shields, an Extension entomologist at Cornell University, who promises the nematodes are a force for good.

These microscopic worms, known as entomopathogenic nematodes, have been used as biocontrol tools for soil-dwelling insects in the past in other industries, such as horticultural crop production. With his rootworm-munching populations, Shields hopes to make them an option for corn growers who are battling Western corn rootworm, a pest that has evolved resistance to every Bt toxin deployed against it and can cost growers up to $2 billion a year, according to government estimates.

"They're a completely independent mortality factor that could extend the usefulness of our GMOs, soil insecticides and other rootworm-management strategies," Shields says.

Texas farmer, Frost, is inclined to agree. Where corn plants once used to lean and curve "like a bow and arrow" from the rootworm feeding, they now stand rod straight, and root digs show minimal damage, he explains. Since that initial 2-acre experiment, he opted to inoculate 238 acres of his farm with more nematodes last year.

FROM NEW YORK TO TEXAS

Shields initially got into the nematode game to help farmers control the alfalfa snout beetle, which had been devastating alfalfa crops in upstate New York since the 1920s. Once the scientists finally discovered the right species of beetle-guzzling nematodes, they started testing them to see how long the nematodes would persist in the soil.

"We have over 20,000 acres that have been inoculated by farmers in New York," Shields says. "After 10 years and 55,000 soil samples, we got tired of looking. They're still there, and it appears a single inoculation is all it takes."

In the process of testing how well these nematodes survived when farmers rotated away from alfalfa to another crop, Shields and Cornell researcher, Antonio Testa, noticed something strange.

"We saw an increase in the nematode populations in second-year corn rotations," Shields recalls. "We realized they must have activity on corn rootworm, too."

Starting in 2014, Shields and his team planted plots with non-Bt corn, nematode-inoculated non-Bt corn and three separate Bt corn technologies: Cry3Bb1 (YieldGard), Cry34/35 (Herculex RW) and a pyramided variety with both proteins (SmartStax). For two years, rootworm populations remained too low for much data. Then in 2016, populations swelled. The conventional corn in Shields' plots showed a damaging root injury rating of 1.9 (the scale goes from 1 to 3, with each number representing another node eaten -- and ever greater yield losses).

Shields' nematodes kept root injury ratings on their non-Bt corn roots down to 0.2, as well as any of the Bt toxins.

Texas scientists asked Shields to send some of his New York nematodes down to the Panhandle to experiment on Frost's infested fields near Dalhart in 2017. They inoculated 2 acres of a continuous corn field planted to non-Bt corn. It was a lot of pressure for his nematodes, and Shields was a little worried.

"We usually don't get the best results in year one; it usually takes two to three years for nematode populations to build enough," Shields says. "And, this was an extremely high rootworm population."

The untreated acres showed high rootworm injury ratings of 2.5 to 2.7 that year. "The corn was basically flat," Shields recalls. But, the nematodes pushed back root injury on their acres to 1.5 in just a single season.

Frost was thrilled but wondered if the nematodes would survive in their new Texas home. Soil core tests prove they have established healthy populations each year, probably thanks to abundant rootworm buffets in the soil, Porter says.

"The takeaway is these liberal northeast New York nematodes can survive in bright red Texas and persist there for three years," Shields jokes.

After presenting his findings to a group of growers in southeastern New Mexico last January, Shields was invited to inoculate another 900 acres near Roswell, New Mexico. He estimates that at least 23 billion of his New York nematodes are now residing in the southwest U.S.

In the spring of 2019, Shields' nematodes made their 1,700-mile trip to Texas packed into boxes of sawdust and dead wax moth larvae in the back of his 2009 Chevy pickup. A generator ran continuously to power a window air-conditioning unit in the tailgate, which kept the truck bed at a pleasant 70ËšF -- the nematodes' preferred temperature.

Starting at dusk to accommodate the nematodes' sensitivity to UV light, a team of entomologists worked alongside Frost until 3 a.m., using a commercial sprayer to disperse nematode-infested water onto more than 200 acres.

The scientists have continued to tweak and experiment with application methods. Later that spring, scientists in New Mexico applied the nematodes to fields in broad daylight through a center pivot, with just as much success in survival and establishment of the nematodes.

Around 30% of the applied nematodes immediately go to work hunting rootworm larvae and breeding, Shields says. But, the other two-thirds will lie dormant, some for two years, some for three years. Then, they will wake up and take over. This is a strategic trick of evolution that allows his nematodes to persist not just for an entire year but for at least a decade and likely longer, Shields says.

He worked hard to keep the genes for this dormancy trait, called delayed infectivity, in his cultivated nematode populations. That's why the New York alfalfa farmers and Frost will probably get by with a single inoculation.

It's a great strategy for farmers but less appealing to commercial companies. Most commercially available nematodes haven't maintained this evolutionary trait, and companies sell new populations to growers each year. Shields' nematodes promise to be far less lucrative a prospect. "Commercial nematode producers are not interested in producing a nematode they only sell once," he notes.

Shields estimates the cost of inoculation at $35 to $100 per acre, depending on the density of nematodes a grower selects. "A lot of the cost depends on how impatient a farmer is and if they are willing to give it a couple years to start working," he says.

So far, research applications have relied on state and university funding, as well as some private funding from local industry groups, such as the Texas Corn Producers Board. Entomologists from Alabama, Michigan, Pennsylvania and Vermont have launched trials to test Shields' nematodes, mostly against rootworm but also other pests, such as billbugs.

Rootworms could theoretically develop resistance to nematodes, just as they have Bt traits and crop rotation, which is partly why Shields has no grand ambitions for his nematodes to unseat any current rootworm-control methods. Rather, he hopes they could lengthen the lifespan of Bt traits and insecticide options by killing Bt-toxin survivors and then lingering in the soil, ready to act should rootworm numbers rise again, Shields says.

"I have said from the get-go that this is a technology that can be used to strengthen other management techniques," he says. 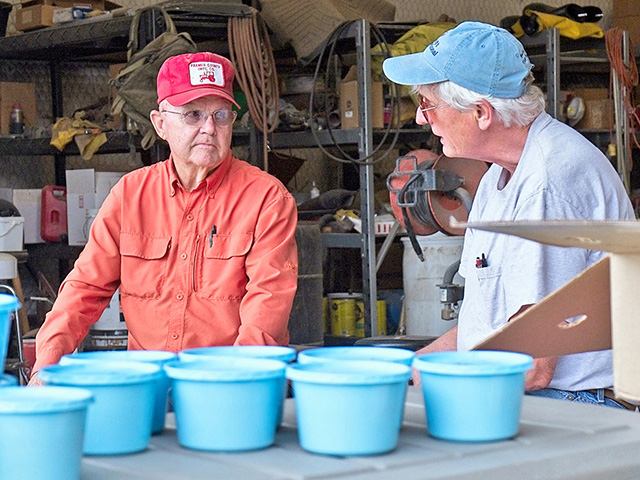