Between corn rows, it provides nitrogen (N), crowds out weeds, improves soil structure and drainage, and reduces water runoff and soil erosion. In a rotational-grazing system, it's a durable, high-protein forage.

Kura clover propagates itself by rhizomes (underground stems, such as quackgrass) and is long-lived and cold- and drought-tolerant. Its extensive perennial root system sustains diverse soil microbes that improve nutrient recycling and soil water drainage/storage.

In wet springs such as 2019, it broadens farmers' options by improved soil-moisture infiltration and earlier spring fieldwork.

"Kura farmers are thinking of a triple bottom line," says Scotty Wells, University of Minnesota agronomy and plant genetics assistant professor. He's the principal investigator of a Minnesota citizens committee for water-quality improvement. "They're also thinking about their sustainability."

Before the Haber-Bosch process of inexpensive synthetic ammonia-fertilizer manufacturer from nitrogen and hydrogen was invented in 1909, legumes were the conventional way of providing nitrogen for crops along with manure.

"By that, he means that kura, when first planted, appears to grow very slowly because it puts most of its biomass into the root system," says kura researcher John Baker, USDA-ARS, St. Paul, Minnesota.

"Consequently, a first-year kura field will be rather weedy (first it sleeps)," he explains. "However, in the second year, it spreads by rhizomes and comes back stronger with each mowing, gradually displacing the weeds (then it creeps). By the third year, the kura's growing vigorously (then it leaps) to life and provides a vigorous and persistent stand of high-quality forage and living mulch between cash crops."

Improved kura varieties such as Everlast have boosted seedling vigor, says longstanding kura researcher Ken Albrecht, University of Wisconsin (UW). He helped develop the kura living mulch rotation with corn about 25 years ago, along with his graduate students. The goal was to have a perennial N source for interseeded corn crops and living roots during the full year to anchor soil and nutrients.

Kura continues to stand up well in areas of heavy cattle traffic and rotational grazing after 13 years, says Abels, the Iowa kura grower. He seeded his initial stand with two other cool-season perennials, Palaton low-alkaloid reed canarygrass and birdsfoot trefoil.

Abels farms about 400 acres of corn and soybeans, manages hay pastures and has a cow/calf operation with a rotational-grazing system.

Northern Minnesota farmer Troy Salzer planted 20% of his pasture to perennial kura clover 19 years ago, and, "it's been extremely productive over the years." He wanted a durable perennial cattle forage for his high-water-table soils and rotational-grazing system.

"Kura requires up to two years and some patience to establish, but then it's extremely durable and provides legume nutrients for livestock or subsequent corn crops," Salzer says.

Similar to Abels, he established kura with Palaton low-alkaloid reed canarygrass and birdsfoot trefoil. His kura and canarygrass are still doing well.

Kura clover living mulch systems have such economic and environmental potential that they've attracted scientists at the universities of Iowa, Minnesota and Wisconsin, and USDA-ARS for 10 to 25 years. They see the kura-corn cropping system as an economical, sustainable way to reduce nitrate and soil loss, reduce commercial inputs and diversify rotations.

Decades-old kura clover research stands grow so vigorously between corn rows in season that it's typically mowed, strip-tilled and sprayed with Roundup at 1 quart per acre to knock it back and lessen its competition with emerging corn seedlings.

For these reasons, it's "also well-suited to remediating wellhead nitrate contamination," Wells adds. "The kura system is strategic with high-value ecologic services."

Central-Minnesota farmer Jon Stevens will use kura to farm more profitably and sustainably. Once it's established, he'll use it as free N one year for corn and then as a hay crop the next.

The Rock Creek farmer plans to drill kura in spring 2020 on 60-inch rows into a multiclover mix that nurses the kura for two years. The following spring, he'll bale the kura then strip-till corn into the standing kura/clover mix. Cutting the kura before planting reduces competition with the corn crop. After corn harvest, "we'll have another cutting of phenomenal feed value," Stevens says. "It's all about farming more profitably." His goal is to get two or three cash crops across the farm.

In his central-Minnesota location, Stevens' research finds that kura will survive or thrive in conditions where alfalfa has winter-killed or drowned out. 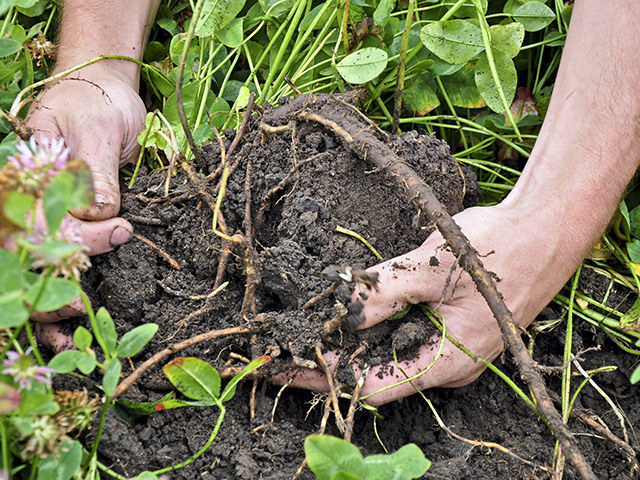