Just when you thought you'd battled every crop pest under the sun, an all-new problem pops up. How problematic the threat becomes is sometimes a question, but early awareness is key.

Here are three new invaders scientists are currently working hard to figure out:

Wayne Martin may not plant many soybeans this year. The Shelby, Iowa, farmer isn't sure he can stomach another round with soybean gall midge, a pest that showed up in his fields in 2018.

The maggotlike critter eats away inside soybean stems until the plant dies. It's now in parts of Iowa, Minnesota, Missouri, Nebraska and South Dakota.

Giant leaps have been made in understanding gall midge habits, says Justin McMechan, a University of Nebraska entomologist. "The challenge is there is still no practical way to manage the pest without limiting the yield potential of the crop," he notes.

Scientists have identified the adult -- an entirely new species of midge. In 2019, McMechan found adult flies emerging and laying eggs continuously in June and July -- the long emergence period means that insecticides can't be the only means of control. And, the orange larvae overwinter in the soil.

Early-planted soybeans sometimes suffer more because adults prefer laying eggs in the cracks that open naturally in the soybean stem around V3. McMechan says alfalfa and sweet clover were identified as alternative hosts, but soybean fields planted near soybeans that were infested last year are likely most at risk.

"We are sharing information as we fast as we get it, but farmers need to understand that many of our findings aren't replicated and to expect changes in what we know," McMechan says.

Documented in Alabama in 2017, the virus and disease have now been confirmed in numerous states across the Cotton Belt.

"We're working hard to unlock its secrets and advising growers not to panic," Allen says. "So far, CLRDV isn't presenting huge yield losses, but we want to keep it that way."

The spotted lanternfly's bold coloring and spotted wings combine with a large body to make it a visible invader. Still, its proclivity to lay eggs on nearly any flat surface like car bumpers and railroad cars also turns it into a moving threat.

While currently causing havoc in the mid-Atlantic states, University of Missouri entomologist Kevin Rice urges Midwest farmers to watch for the pest. "Most insects are really good moms and like to put their eggs where they can survive by eating that host," Rice says. "This pest is an indiscriminate egg layer, and the transportation element threatens a potentially explosive spread."

The lanternfly is partial to the tree of heaven (Ailanthus altissima) but feeds on 70 different U.S. crops and plants. Last year, USDA made $17.5 million in emergency funding available to stop the pest's spread in Pennsylvania, where it has caused damage to stone fruits, grapes and residential properties.

If you find one of these bawdy invaders, contact your local Extension office or department of agriculture. 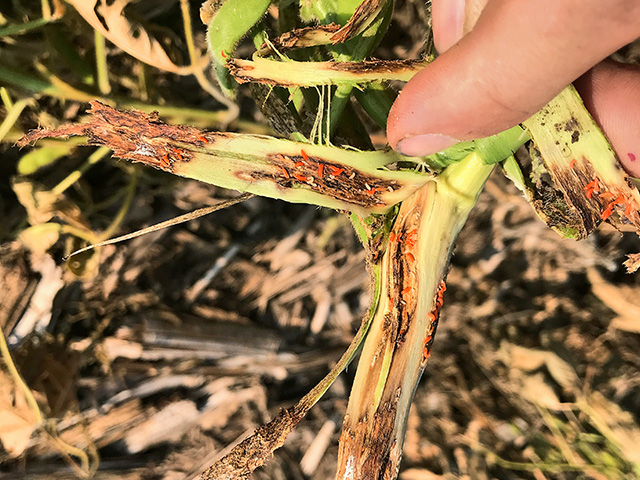