As a herd of more than 1,400 buffalo starts to wind its way down a not-so-distant hill, you can see dust kicking up behind it and almost feel the rumble beneath you from the enormous size of the animals.

Billed as one of the largest buffalo roundups in the world, every September, South Dakota's Custer State Park draws visitors from around the world to watch as riders and park personnel corral, brand, vaccinate and sort the herd.

Traffic clogs the road leading to the two public viewing sites in the park, located in the southern part of the scenic Black Hills. Vehicles start to line up as early as 4 a.m. to be first in line to find an ideal vantage point to view the roundup when the park opens at 6:15 a.m. The actual roundup begins at 9:30 a.m., and if all goes right, buffalo are in corrals by noon.

Although many visitors make plans years in advance to watch the roundup, Terry and Judy Lanning, from Jenison, Michigan, stumbled across the event while on vacation.

"We came here 46 years ago on our honeymoon and wanted to come back to see Mount Rushmore. While we were here, we ended up talking to several people in Custer who told us about the roundup, and we didn't want to miss it," Judy says. "The area hotels were full, so we slept in our van at a campsite and headed to the roundup at 4:30 in the morning. For us, it was a once-in-a-lifetime experience. It was awesome."

Custer State Park encompasses 71,000 acres, so gathering the herd into nearby pastures begins a couple of weeks before the official roundup.

On roundup day, three teams -- red, white and blue -- each have 20 riders that herd the buffalo to the corrals. Team leads coordinate with each other to make sure the roundup proceeds at the right pace, with pressure placed on buffalo, when needed, and backing off, if necessary. Pickups play an important role, too, when moving the herd. If a rider falls off his or her mount, or a buffalo decides to chase a horse, a pickup gets between to keep them safe.

During the roundup, cowboys and cowgirls systematically work to funnel buffalo into a fenced pasture area that then leads to working corrals. On the north and south hillsides, excited visitors get just a glimpse of what the Old West might have looked like before buffalo almost became extinct from overhunting.

Today, the U.S. Fish and Wildlife Service pegs the total American buffalo count at 200,000 head. Besides state and federal public herds, more than 1,700 private ranches and farms raise buffalo in the U.S., according to the 2017 USDA census.

It takes a lot of riders and support vehicles to move a herd this size. But, once riders participate in a roundup, they're hooked.

"I keep coming back every year because it's exciting to ride and chase buffalo," says Owen Garnos, an 80-year-old rancher from Presho, South Dakota, who has helped herd the park's buffalo for some 15 to 20 years. Although he's lost the exact count, he's now one of the core riders who helps guide and mentor some of the more inexperienced volunteers on horseback.

Wildlife populations in Custer State Park are based on vegetation production, explains Mark Hendrix, resource program manager who heads up the roundup. "It's all about long-term sustainability. We have about 1,460 buffalo when we start the roundup and try to cull down to about 1,000 animals. We'll sell about 450 head at our auction.

"We have the longest-running auction in the world and have been selling bison since 1966, when we became brucellosis-free," he explains. Bison have been sold into every state in the U.S., including Alaska and Hawaii, plus Canada and Mexico. Bison are generally purchased to supplement an existing herd, to start a herd or to be processed for meat.

Bull calves have to weigh at least 320 pounds to be sold on auction, with some coming in at 460 to 480 pounds. They're also ear-tagged if sold, Hendrix says. "Every animal has to be processed. All females 2 years and older are preg-checked, and 2019 calves are vaccinated, including bangs, and dewormed. They're also branded with an "S" -- which is the registered brand for Custer State Park -- along with a "9" for 2019 and tagged.

"We only keep the pregnant ones and as many as the range can support. Open 2-year-old heifers and cows are sold. We also record weights on every animal and add microchips to those who don't already have them," he says.

This was Hendrix's eighth roundup, although he's worked in the park for seven years. "It's a public event, so I don't see us ever charging a fee," he says. "All the bison are owned by the citizens of South Dakota.

"The fun part for me is watching the rider teams work together and seeing the faces on an excited crowd, and listening to them cheer. They're here to have a great time, and where else are you going to see anything like this?"

It's easy to understand why people confuse bison and buffalo. Both are large and part of the Bovidae family.

However, there are two kinds of bison: the American bison and the European bison. There are also two forms of buffalo: water buffalo and Cape buffalo.

Still, buffalo is commonly used when referring to the American bison, which adds to the misunderstanding.

A major difference between the two is a hump that bison have at the shoulders. The hump allows the bison's head to function as a plow, so it can sweep away drifts of snow in winter. Also, bison horns are much shorter and sharper than a buffalo, which can reach up to 6 feet with pronounced arcs. 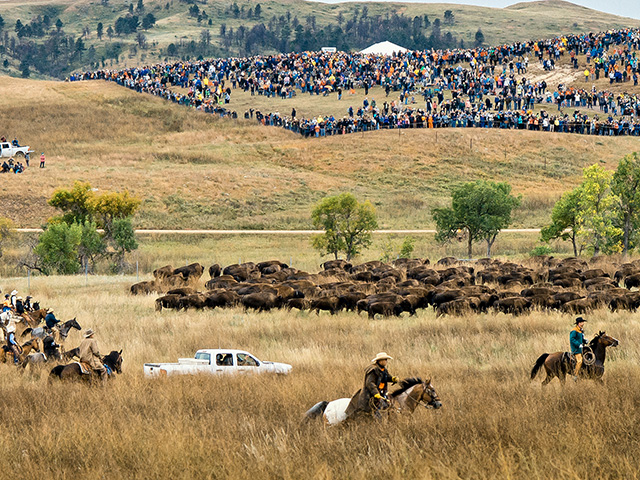