The immediate focus for many of agriculture's major manufacturers isn't full autonomy. That day's a lot more likely to come as a slowly rising tide than a landscape-altering tsunami.

Autonomy has already crept onto the American farm via automated guidance on more than 70% of farms over 1,000 acres, according to one study. That's likely to continue with ever-improving sensors and ever-smarter artificial intelligence slowly taking over tasks.

Where's the fun in showing off cameras and computer chips, however, when you have a full-power, cabless autonomous electric tractor that's only marginally larger than your average sports utility vehicle?

That's what drew crowds at the 2019 Agritechnica machinery show, in Hanover, Germany, far more for what wasn't there -- a cab, a fuel tank and an engine -- than what was. The machine was a bold statement by Deere about what the future could be.

The day when farmers can step away from their tractors may still be far out, but Deere has a few ideas about what that future may look like. The SUV-sized electric machine, while already field-tested, could be decades away from implementation if such a concept ever even makes it to production. Another program Deere has showcased is a little more tangible, a "pod," as the company calls it, of sensors that can be wired onto existing tractors to provide autonomous operation.

The sensor package includes three sets of cameras, each that can produce a 3-D image, and LIDAR (light detection and ranging), which emits infrared pulses and detects the reflection to see ahead. Combine that package with the GPS receiver already on many machines for Deere's AutoTrac system, and Andrew Rekow, with Deere's autonomous solutions engineering division, says artificial intelligence can create a picture of a tractor and the world around it, and drive that machine to finish a task.

Right now, the goal for the technology is spraying orchards. That application offers a predictability important at this stage of development.

"As long as the sprayer is spraying, and as long as our wheel speed is correct, we know we're applying, we're doing the job correctly," he says. "With a job like tillage, where you have to look behind you and make sure the job is getting done right, that's going to take a little more to automate the task."

"Getting a tractor to drive up and down the field, that's the easy part," he says. "Getting it to detect and stop if there's an obstacle or a person in the way, that's the challenge."

The equipment is currently set up to work on the 5R series of utility tractors, though the concept could be exported to other lines.

"It's literally eight bolts and a wiring harness," Rekow says. "There's no reason we can't take the same package and same sensors, and integrate them into different tractors. The same basic technology can be used for virtually any application we have."

If a bolt-on sensor package is, roughly speaking, in the near future, a production run of Deere's other autonomous tractor option on display in Germany is not. In fact, a machine like the SUV-esque electric tractor could even require major infrastructure changes.

The project has been under development in Europe between Deere and a German university, and thanks in part to a German federal grant. It boasts two 250-kilowatt motors, one for the tractor and one to help power an implement. Rekow says it could offer capabilities in line with Deere's 9R series of tractors. The problem is electricity.

Current batteries aren't prepared to do it all throughout the day while retaining some of the huge benefits that come with the small form factor and light overall weight.

Other ideas include connecting the equipment into the power grid. Perhaps the tractor could unspool a power cord as it heads down the field, then roll it back up as it returns. Maybe, Rekow says, a swarm of tractors could be daisy-chained together, one plug-in powering them all.

"This is a very forward-looking machine," Rekow says. "There's probably a finite horizon for internal combustion engines. There's definitely a strong push, particularly in Europe, for alternative energy; so without exploring ideas like this, we have no idea what's the right answer." 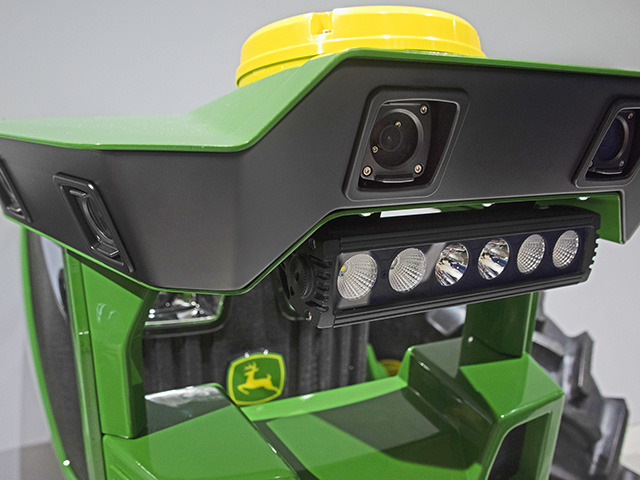